Tiritiri Matangi  means 'buffeted by wind'. These days the windy island just off Auckland is a bushy sanctuary to  thousands of native birds. Some of them were not been seen in Auckland for a hundred years while others had faced complete extinction.

Twenty five years ago the Tiritiri Matangi Supporters group was formed and since then members have helped replant well over half the island in native flora and helped DOC with funding to reintroduce native fauna and to look after them. 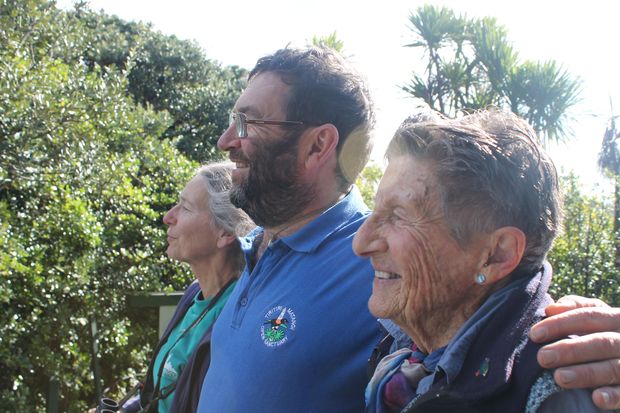 (from left) Morag and Simon Fordham and Diana Dombroski.

Today, supporters run a shop and visitors centre they had built on the island, and members are on hand to guide visiting tourists and school groups. 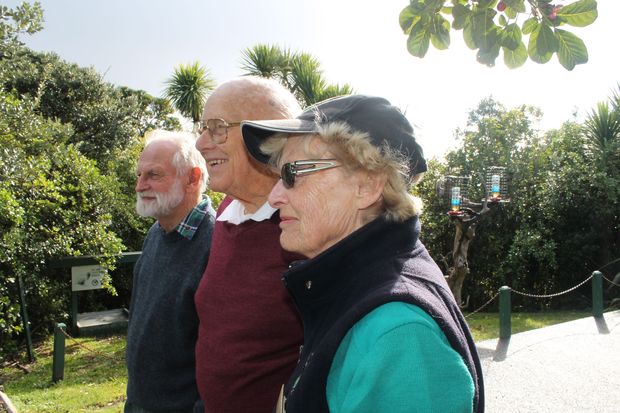 First birds we meet are the rare Pateke or brown teal. "That’s Finn the philanderer," says  Diana Dombroski who at almost ninety is the island’s oldest guide.

"I’ve never given much thought to the morals of birds," says one Canadian visitor. A moment later we’re treated to a fine display of flight by two Kokakos. The elegant grey bird with a blue wattle is on New Zealand’s endangered list, but there are now thirty-nine living on Tiri, descendants of the original three brought here in 2007.

“The bird in the tree is called Rehu”, says supporter Morag Fordham.

“Yes,” says Morag. “And look there’s Noel”, as another bird swoops overhead. Noel is Rehu’s partner; they’ve been together for four breeding seasons.

Kokakos have relatively short wings and are poor fliers. Morag Fordham looks after the Kokako population on Tiri and surmises that eventually they could have lost the ability to fly altogether. Just like the kiwi.

As we  walk up to the visitors centre the bush around us chatters and sings with fantails, stitch birds and saddle backs, tui and bell birds, whiteheads and robins, all  busily diving and scratching in the undergrowth or forcing beaks into flowers and seed heads.

Maori settled on Tiritiri about 800-years ago, burned off the bush and planted gardens. In 1865 the first lighthouse was built on the island and the last lighthouse keeper Ray Walter stayed on after the lighthouse was automated, to become a DOC ranger managing the replanting project. Wife Barbara and he stayed on the Tiri till 2006.

Jim Battersby remembers the first time he came to Tiri to help out in the first native plantings in 1988. He realised then the whole operation needed a lot more person power and money if it was to be effective. So he got a few people together and formed the supporters group. Soon they’d bought spades and polythene, then, they got nine thousand dollars from the Lotteries Board and bought four-wheel farm bikes for Ray.

He reckons the supporters have raised over three million dollars for the island. Jim Battersby smiles as he tells a story about Hauraki Gulf Maritime Park Board which looked after Tiri and the other gulf islands in those days. “I heard that one of the members of the board said we were a harmless bunch of enthusiasts who would fizzle out within a year. But within a year we were going from strength to strength, while board was taken over by DOC!”