Eric needs fine hand-eye co-ordination.Displayed to the side of Eric are just a few of the 5000 tartans available.

Eric says a kilt should last several life times and what kills them off is usually poor maintenance. The secret is putting it together with strong thread and good quality leather, in the first place, then storing it properly away from moths.

Eric chalks the tartan before cutting, one mistake and 8 metres of material is wasted. Eric's favourite tartan is the blue and green themed Isle of Skye.

Not all tartan designs are created equal, according to Eric. Before the reign of Victoria there were only about 150 tartan patterns. Now there are more like five thousand. Many were first revealed in a controversial 1842 book called ‘Vestarium Scoticum’ which was later denounced as a forgery. 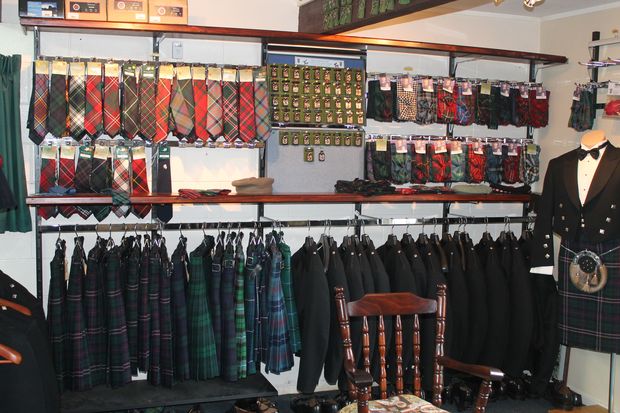 Outfits for hire, tartans and accoutrements, all displayed with military tidiness.

Eric says some tartans were attributed to the wrong clans, but if a Clan chief declares a tartan to be correct, then it is so. These days the Scottish Tartan Authority holds an official register of tartans. 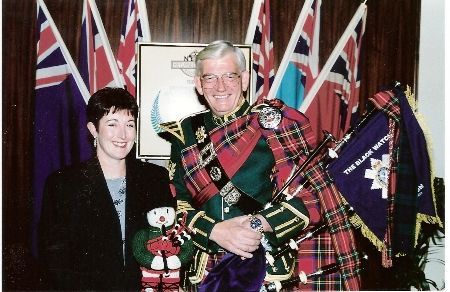 Eric in full regalia with his wife Pam.

Eric says he’s one of only two certified kilt makers in New Zealand. Each kilt contains a single run of fabric eight metres long, imported from Scotland, and the whole thing is created by hand.