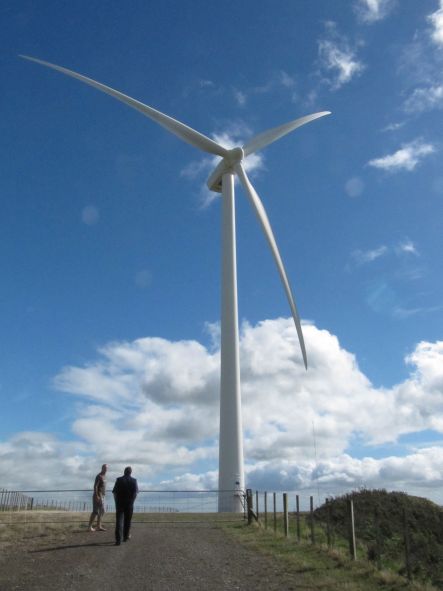 A Giant V 90. From blade tip to opposite blade tip is 90 metres, the height of a 27 storey building.

Spectrum's Jack Perkins enters the tower of a giant wind turbine on the Tararua ranges behind Palmerston North.

'It's like climbing inside a vertical submarine,' he says. But oh the relief - there's a phone box-sized lift to carry him 60 metres up to the generator. This turbine is under repair but normally the cable running up the tower only a couple of feet away from the lift would be carrying 33,000 volts. 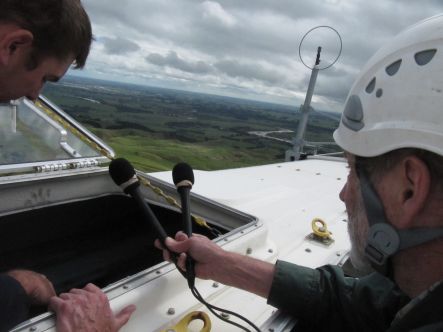 Good place for lunch - on a fine day.

The nacelle at the top contains the generator and gearing equipment connected through the hub to the 90 metre diameter blades. Even in today's moderate wind the tower is swaying noticeably. The Tararua Wind Farm consists of 134 turbines (31 with 90 metre diameter blades and the rest are 47 metres). All have been made by the Danish firm Vestas, a world leader in wind turbine design and manufacture. 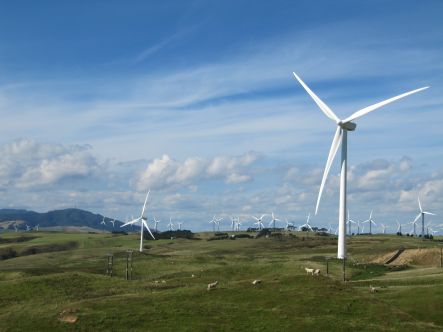 Wind strength and constancy make The Tararua Wind Farm one of the world's most efficient electricity producing sites. One of the large turbines generates enough electricity in two and a half hours to keep a home supplied for a year.