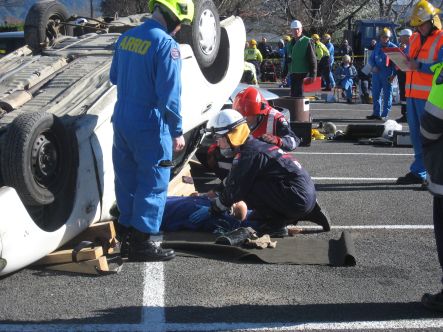 The car is upside down, its roof stove in. A dummy is pinned under the wreck and a real live 'injured' person is slumped in the back seat. Both have to be rescued by a 6 man team of volunteer firemen working against time. Judges award points as the firemen cut out and extricate the victims.

Greytown's Road Crash Rescue competition organizers have a couple of dozen wrecked cars on hand gathered from around the Wairarapa. The competition runs all day with each wreck set up to simulate a different type of accident found all too often on our roads. A theatre make-up man uses his art to create some horrific injuries on the 'victims'. Volunteer fire brigades from around the north island have gathered in Greytown and the winning team could eventually compete in the Australasian finals in Sydney.

There's a fun angle to the day but far more important for the firemen is the deadly serious purpose of honing their skills so that they'll be better able to cope when faced with the real thing.

Spectrum's Jack Perkins gets close to the action. 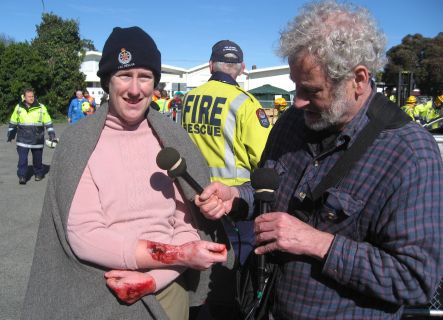