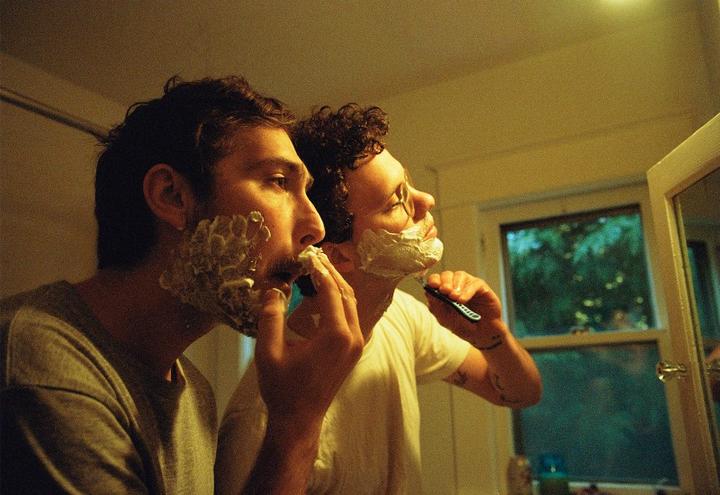 Indie folk/rock duo Whitney has graced us with their heartbreaking lead single from forthcoming album Forever Turned Around. ‘Giving Up’ is drenched in a sunny, easy-going melody, contrasted by the sparse lyrics which detail the glacial pace of a relationship’s demise. A fantastic, swinging trumpet solo assumes the place of a bridge, and the addition of a chamber string arrangement marks the discernable, welcomed difference between 2019’s release and Whitney’s debut Light Upon the Lake from 2016. At seventeen years old I wasn’t won over by the house party hyper-rotation of seemingly vacuous singles such as ‘No Woman’, but this new album has, as the title suggests, turned me around. WR

British producer Derwin Dicker returns with a typically lovely bit of dance music, manipulating fragments of Hilary Woods’ ‘Sever’ via his Akai MPC into a propulsive, delicate track. There are no big hooks, and it’s unclear how the slightly cynical title ties in, but it’s a texturally beautiful aural space to hang out in for a while. TS

Priya Sami (Trip Pony, Sami Sisters) has put out the first song under her own name, and it deals with the exhaustion of having to call out ignorance and small mindedness on a daily basis.

A stint in India studying Canartic singing has made her voice even more agile in this R+B inflected jam. Wah-wah guitar and casiotone beats are provided her bro-in-law Jeremy Toy (She’s So Rad) and they sample some Indian singers, which makes a texturally interesting bed for Priya’s clear frustration. KJ

Local alt-pop quartet Ha the Unclear recorded a single at Roundhead Studios with legendary US producer Sylvia Massey (Johnny Cash, Tom Petty & The Heartbreakers, Tool) in 2018, making use of her trademark production methods such as plugging a guitar into a wedge of cheese (the track itself is certified safe for the lactose intolerant).

The result was ‘Julius Caesar’, a song alluding to a popular theory in physics that claims you breath in a single atom of Roman dictator Julius Caesar’s final breath, every breath you take. Though singer-songwriter Michael Cathro frequently slips scientific and philosophical theory into his songs, ‘Julius Caesar’ stands apart from 2018’s Invisible Lines due to its abstract, less personal subject matter. Strings, cymbals and a whole bunch of distortion are the perfect additions to Ha the Unclear’s guitar-driven ode to connections humans form through time. WR

Marika Hackman - The One

‘The One’ sets the tone for the album, with a crooning pop melody, lots of swearing, brutally attacked guitars and a shouty chorus of haters. Her sense of humour comes through loud and clear with lines like: “I've got BDE - I think it's a venereal disease”, and the way she swings both braggadocio and self-deprecation at the same time is impressive.KJ

The project of 20 yr old Papakura native Payton Taplin, Fable NZ has already collaborated with Bobandii, has projects in the pipeline with Tom Scott, and is bolstered on this track by production from regular collaborator Dera Meelan, frequent beatmaker for Church & AP.

It’s easy to see why he’s attracted attention, with a melancholy delivery that leans into his kiwi accent and milks plenty of pathos from Meelan’s beat, creating a track that’s totally distinctive, and strangely moving. TS