How viable is hydrogen as a major power alternative? Is it the key to a lower carbon economy and this country being more energy self-sufficient? 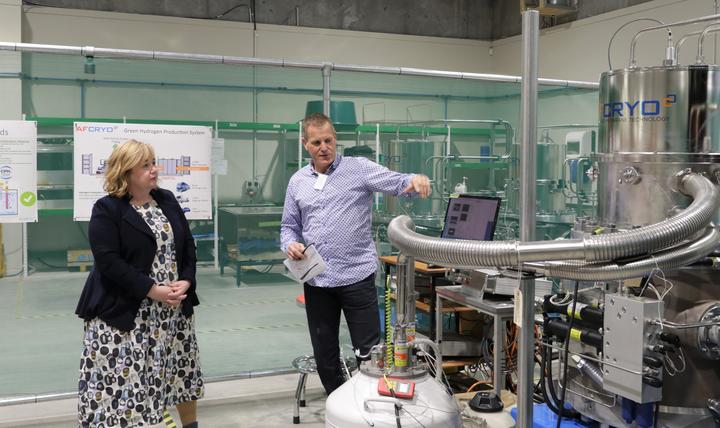 In May, AFCryo unveiled what they bill as a revolutionary green hydrogen production system, in partnership with UK company Clean Power Hydrogen. Its first production unit is now operational as part of Northern Ireland’s first one-megawatt electrolyser-based system, at a wastewater treatment works.

“The technology partner we have in the UK CPH2, they do electrolysis which is a membrane-free process. So, rather than systems that run a membrane between the two electrodes, CPH2 has developed a much cheaper, more efficient system that does a co-mingled gas production from the electrolyser, which means you get a hydrogen/oxygen combined gas stream offered.”

This gas is then separated outside of the electrolyser using cryogenics, he says.

“You take that gas stream down to minus 200 degrees [Celcius], and the oxygen liquefies out and leaves a pure hydrogen gas stream.

“That's the first phase where cryogenics is used in the production of hydrogen. The second stage is where you then take that hydrogen gas to a liquid state by taking it down to minus 250 degrees celsius, and that becomes a liquid, which is a much denser way of storing the energy.”

Critics of hydrogen point out it’s not particularly efficient, but Boyle says it’s a question of what the energy is used for.

“The best form of energy is obviously, in New Zealand for example, hydropower, or wind or sun – 100 percent renewable. Once you deal with the environmental impact of dams, etc - you've got a renewable energy source, it doesn't have an emission.

“The best form of that energy is being plugged into a wall socket and using it directly as electricity.

“And if you're running close to that plug, and you're moving short distances with light loads, then batteries make a lot of sense.

“But as soon as you want to go further, and payload is an important part of your business model. Then you need to move to hydrogen.”

Hydrogen is abundant, he says, and it makes sense to use it. It is suitable for trucking, shipping, aviation and ferries.

“When you're wanting to move long distances, and payloads importantly, trucking then gaseous hydrogen makes a lot of sense.”

As diesel is “not on the table anymore” hydrogen remains the best bet for shifting heavy loads over distance, he says.

“Batteries are great for local and light, but as soon as you want to go long and heavy, then hydrogen is the only option available to us at the moment.”

Green hydrogen is a great opportunity for New Zealand, he says.

“We have a lot of renewable energy, about 80 percent of our energy is green and renewable. It makes sense for us to manufacture our own fuel in this country.”

New Zealand should be aiming for an energy mix, he says.

“Between wind, solar and hydro you can build an interesting mixture of generation options. And where hydrogen becomes really good is that you can actually store it. So you can generate when the winds blowing or the sun is shining, and you can store it for later use. You don't have to use it as you make it.”

Getting hydrogen infrastructure in place is achievable, he says.

“At current prices you can build the infrastructure, manufacture hydrogen and use it. And it's comparable to diesel.

“So, I think we have to move away from the conversation of does this work? Current fuels are cheaper. We've all agreed that we can't keep doing what we're currently doing, we need to shift and will that come at some cost? Absolutely. But that's the reality of life.”