British actress Miriam Margolyes isn't sure why she's so uninhibited but it probably started with her parents' love.

"Somehow they gave me the confidence - 'cause they loved me so much - to behave in a consistently inappropriate way throughout my life ... Sometimes I know I'm being naughty and sometimes I just don't but I feel I can't censor myself. There's some limiting factor which most people have that I don't seem to have in my make-up." 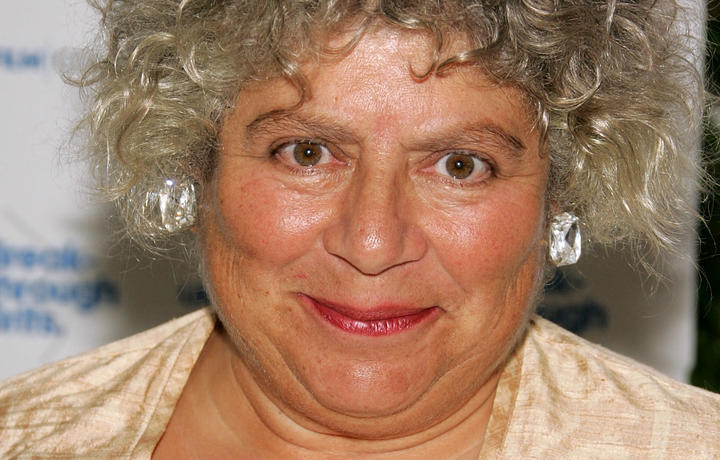 Margolyes talks to Kim Hill about her charming, funny and often serious new memoir This Much Is True.

Margolyes can't understand quite how she's been able to make "a very good living" in the entertainment industry, given her appearance.

"I'm not good-looking, short, physically in many ways unappealing and yet I've managed to make a living in this business. I'm deeply grateful for that and ever surprised, always surprised."

With another series of the ABC documentary series Miriam Margolyes: Almost Australian in the works, the 80-year-old is busier than ever before and feels lucky for it.

Margolyes, who is a dual British and Australian citizen, has received flak for criticising the treatment of Aborigines and thinks Australians, in general, need to learn to take criticism.

"Australians are quite touchy people. They're passionately patriotic and feel that any criticism of Australia is unpatriotic.

"My view is criticism makes things better. And if you love a place - and I love Australia - you want to make it better. Therefore I think criticism is exactly what is needed.

"There is a grave lack in Australia of justice towards First Nations people and I have to speak out about it when I come across it."

Margolyes tells Kim Hill that she feels a duty to speak out against injustice in order to help "give everybody a fair suck of the sauce bottle."

Margolyes' connection with Australia is through her partner of 53 years - retired history professor Heather Sutherland.

She and Sutherland have famously lived in separate countries but have now - at 80 and 78 - the "absolute catastrophe called Brexit" is keeping them apart.

People are keen to point out the couple have only managed to stay together by living in separate countries, Margolyes says, but she thinks their secret is their individual commitments to their work.

"We decided to follow our careers but keep our relationship going. And although it's not easy, we've managed to do that for 53 years.

"We're very different characters. She is much more conventional on the outside and better behaved than I am. I've always been a naughty schoolgirl and at the age of 80 I have to confess that that element of my character is still in operation."

Margolyes confirms to Kim Hill that her reputation for fervent flatulence is founded in fact.

"I'm sure that other people in the world express wind from the nether regions but maybe they don't do it as openly as I do. I don't like keeping things in, from my mouth or the other end."

Miriam ​Margolyes is a frequent guest on The Graham Norton Show. Watch a clip from one of her appearances below: