Critically acclaimed author Megan Dunn has returned with a semi-memoir, essay collection book, which she describes as “short chapters of a woman who couldn’t go placidly”.

It’s a reference to Desiderata – a poem about leading a good life - and she takes issue with how realistic that has been for her in Things I Learned At Art School.

Dunn shares vignettes from her early life and coming-of-age during the ‘70s, ‘80s, and ‘90s, from her Smurf collection to working in a massage parlour. 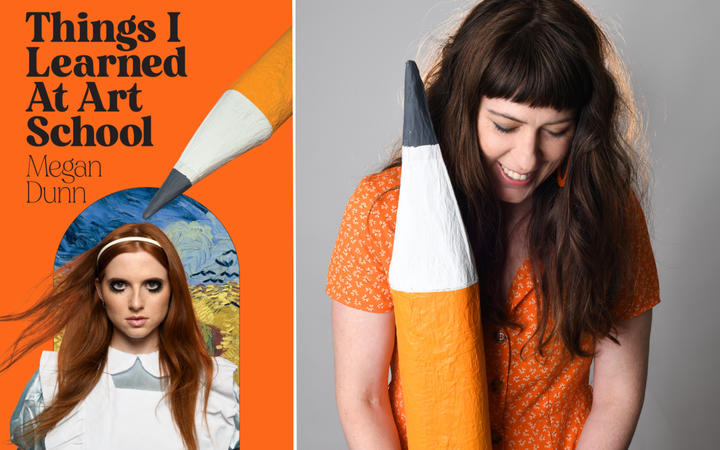 Following on her 2018 debut Tinderbox, Dunn says she had to up the ante and use her humour and voice to confront tough personal topics.

"I suppose one of the parts of writing this book that was really interesting for me was I kind of saw where my wise cracking persona had come from," she tells Saturday Morning.

"Like I've got a little gem of a piece in there, 'good girls write memoirs, bad girls don't have time' which talks about a birthday card my mum gave to me when I was 14.

"I've been interested in how that trajectory of my wise-cracking persona, as a writer and as a person, has come from that birthday card and old movies... different things we would've done when I was growing up. I guess one the things the book does is it looks at how that serves me and how that limits me."

Dunn hopes her quirky and prized chapter titles will pique interest of readers, like 'Life Begins at Forty', 'That Time My Uncle Killed Himself', 'Various Uses for a Low Self-esteem' and 'Art in the Waiting Room'.

Recalling and writing vividly about her childhood was the most emotional, she says.

"I was going through all sorts of feelings about the time that had passed and feelings about mum's cancer that was back ... I was just fraught with all these feelings for her and for me and that childhood and also for things that I wanted for her that never happened.

"You know not everyone gets their dreams come true ... if there was a poignancy, it was also for things that never happened for mum that she would've loved to have happened.

That's when she wrote 'Art in the Waiting Room', an essay which she says moved people "in a way that not a lot of work I've written to date had".

"It's funny how writing can be that kind of vessel, you can put your feelings into it like a bottle and then the reader uncorks it.

"When mum died, I realised I was moving into a much deeper and unexpected area of memoir and of my life and thinking about art and what it means and what it can mean, especially in a secular world, which is some of the stuff I take on when I describe her sudden illness and death in Art in the Waiting Room."

Even with some of recollections that may seem to be "frothy" on the surface to readers, there's sad under currents, she says.

"There's more than meets the eye with some of it, which is exactly how writing should work.

"The piece about my uncle's suicide, I really cried a lot when I wrote that ... he was a jolly Irishman and a joker, and we all adored him.

"It's like all this unprocessed emotion came out when I wrote it and what's interesting to me is how that can transform and transmit to the reader."

Using quips and one-liners, Dunn also takes the reader on a journey through her time in art school, the 'mean girls' at school, and her obsession with the mermaid movie Splash.

"I hope people will smash it back like a packet of TimTams, the way me and mum would when we were riveted watching a piece of telly together."