Knuckle hopping, ear pulling, fish cutting, and the high kick, and nalukataq (blanket toss) are some of the ‘Olympic level’ games for the Alaskan community.

While the world has its eyes on the Games in Tokyo, the Alaskan community of Fairbanks has played host to its own long-standing sporting event, the World Eskimo-Indian Olympic Games. 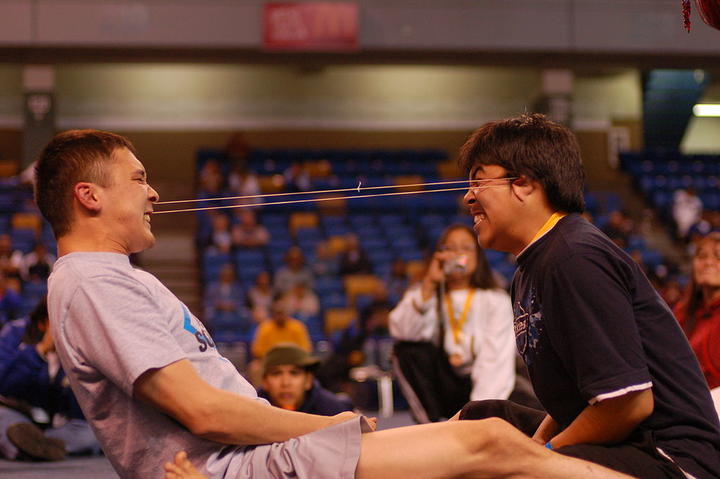 The WEIO website describes the infamous ear pull as “a game of stamina”. Photo: Andrew Otto

The WEIO games have been running since 1961, but were forced to take a hiatus last year due to Covid-19.

However, last week the games made a successful return.

WEIO board chairperson Gina Kalloch was originally involved with the Games as an impromptu competitor in the Indian Stick Pull event in the early ‘80s.

Although it was her first time trying it, she won.

“So that got me hooked and I learned more games and I was a competitor through my 20s and into my maybe early 30s, and from that I became a coach, a floor official, a board member in the organisation and now the chair of the board," she told Saturday Morning.

In the Indian Stick Pull, contestants grab the opposite end of a tapered and greased wooden dowel and attempt to pull the stick from their opponent’s hand.

“It’s to simulate having to deal with fish, and getting fish out of the net, or fish wheel or trap.

“So two people, their hands meet in the middle of that stick, and on the signal they do whatever they can without moving their feet or regripping the stick to get it away from the other competitor.”

It’s a bit different from the Eskimo Stick Pull, in which contestants face each other and pull on a stick placed between them – one holding the outer ends with both hands and the other holding the middle.

Kalloch says that “comes directly from the way people in the Arctic hunt for seals.”

“They send a lure down and when the seal takes the lure, there’s a stick that is pulled and it stops because it’s longer than the hole in the ice they’re hunting through, and then they have to pull the seal up using that stick.”

She says the events at the Games are not based on anything new, having been passed down from generations and symbolising traditional Alaskan native survival and hunting skills.

The infamous Ear Pull event, which involves two people with a piece of sinew looped behind each of their ears [pictured above], is considered a test of stamina and endurance.

“It comes from having to deal with being hurt when you’re out somewhere, where you can’t be helped … if you’re out on the ice or woods and you get frost bite, you can’t just sit down and be in pain, you have to keep going so you have to build up a tolerance to pain.

“As my children were growing up, they got involved, and now my grandson for the first time did the Ear Pull this year … he came in fourth which is pretty good for a first time.”

Toe kick and kneel jump games are based on learning to move quickly when ice ‘rots or breaks during Spring.

“If you were in a village, even to this day, and there were older people they prefer to sit on the floor and they sit in that position because they were trained as children to sit like that and have to get up quickly in case anything happened,” Kalloch says.

There’s also the one-foot and two-foot high kicks, which came about from stories of hunting parties or travellers sending messages to nearby villages by using a runner to get close enough to send a signal by jumping and kicking.

In the two-foot version of the game, the person jumps with both feet at the same time to kick a suspended ball and lands balanced whilst keeping their feet parallel. The one-foot version uses just one foot to kick the ball and that has to be the same foot the person lands on.

Kalloch says the record for the men was nine feet and nine inches.

But she says their indigenous event is not the only one in the area, with an Arctic winter games being shared with Canada every two years, involving the northern provinces of Canada and countries of the Arctic region.

“Our Games along with other many other games are included in that competition. But they also have figure skating and basketball and things like that, so it’s a mini-Olympics as well.”

There is a strong connection to culture in the Games, she says, and a lot of people who aren’t skilled in the sports of dominant cultures find they can excel in native games from their own culture.

“It’s a spiritual thing, it’s a fun activity, it’s a healthy alternative to unhealthy activities, and it’s a pride you can take in something from your culture that’s pretty amazing.”