Tim Hume: the rise of the extreme right in Europe

Over the last 10 years there has been a dramatic rise in far-right movements across Europe.

In Greece, the neo-Nazi party Golden Dawn in 2012 grew to become the third largest party in the parliament. In Italy, an anti-immigrant campaign by politician Matteo Salvini coincided with a surge of racist abuse and attacks. And in Poland ultra nationalists and football hooligans have become willing foot soldiers in the country’s never-ending culture war.

But what has been driving this growth of far-right populism? How bad is it? And is there an end in sight?

London-based New Zealand journalist Tim Hume has been investigating the rise of these far-right movements for his five-part documentary 'Decade of Hate' series, currently featured on Vice. 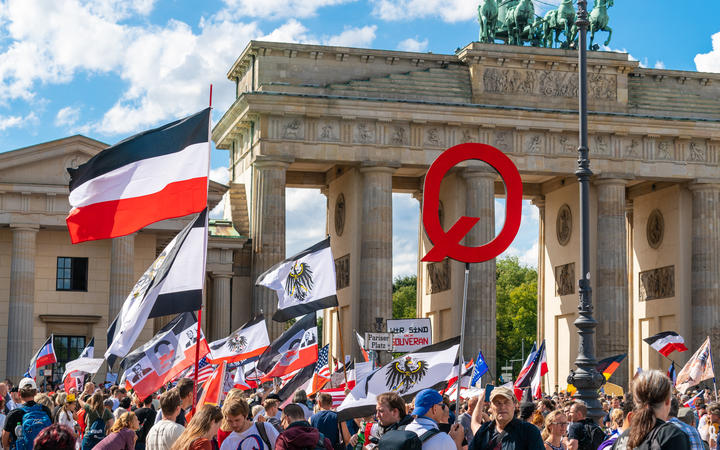 “What we’ve seen in Europe over the past decade, not to over-simplify things [but] what’s been driving this is anxieties over immigration and identity, and Islam,” Hume told Kim Hill.

“And then more recently you've had the pandemic, just creating the perfect breeding ground for far-right conspiracy ideology to take hold.”

Germany in particular, Hume says, seems to have a seething far-right underbelly.

“There's a lot of rage. The far-right threat there is quite heterogeneous.”

Hume says one movement of real concern are the Reichsbürger who broadly argue that the Federal Republic of Germany has no legal standing, and that they are the rightful representatives of the jury.

“[It’s a] German conspiracy theory movement. Its ideological origins are sort of in the Nazi holdovers after World War II, but they are sort of a German sovereign citizens movement,” he says.

“I've seen similar operations in New Zealand, where your basic premises that the state has no legitimacy."

The Reichsbürger see themselves as at war with the state, and it’s a self-fulfilling prophecy, Hume says.

“I think for years they were really treated as some sort of joke but in recent years, they've really got on the radar of authorities and have emerged as a fringe movement, but one that's increasingly radicalizing and very often holds anti-Semitic views.

“They've emerged as a movement of real concern.”

The group have played a role in the volatile anti-lockdown movement in Germany, he says.

“Back in August, there was an event where hundreds of people at an anti-lockdown rally stormed the steps of the Reichstag after a speaker told them that Trump had arrived in Berlin, and that really sent shockwaves through Germany, about the potential dangers of this movement.”

Hume says whether these forces gain power or hold on to power, they invariably shift politics to the far right.

There are also major concerns in Germany about far-right cells in the military and in the police, he says.

“There will be these sort of prepper cells, and they're often linked to the Reichsbürger movement. They'll come across networks [in] chat rooms, on WhatsApp, etc, of people in the armed forces who hold right wing extremist views, [who] are sharing propaganda.

"Some of them are allegedly plotting for this Day X - that will be the day when they move to overthrow the state.”

There’s been an entire unit of the SEK, part of the German forces, that was disbanded for this reason, he says.

"There's also a quite a staggering plot that was uncovered in Germany, still working its way through the courts, where a German soldier, he successfully faked an identity as a Syrian refugee receiving asylum under this fake identity, which he then intended to use to carry out these false flag attacks on left-wing targets and spark this race war in Germany.”

However, you want to frame it, it’s an age of identity and resurgent nationalism, he says.

“You can see this all around the world. So many of these movements are very explicitly reactions towards globalism.

“They are always raging against globalist elites in favor of the nation, they reject immigration, they are reasserting this Europe of nation states, even what they want is a fiction in the first place.”

For the documentary, Hume spoke to the head of the National Movement, an influential Polish ultra nationalist group.

“And he would say, ‘We see ourselves as embodying what Europe really is, we look to the capitals in the West, we look to Paris to London, and you've been ruined by immigration and by the cultural revolutions of the 60s. What Europe's really about is what we embody’.”

This idealized Poland completely ignores the fact there are LGBT people and ignores that Poland was a heart of Jewish life before the Holocaust, Hume says.

“These groups don't have any place in the ultra-nationalist vision.” 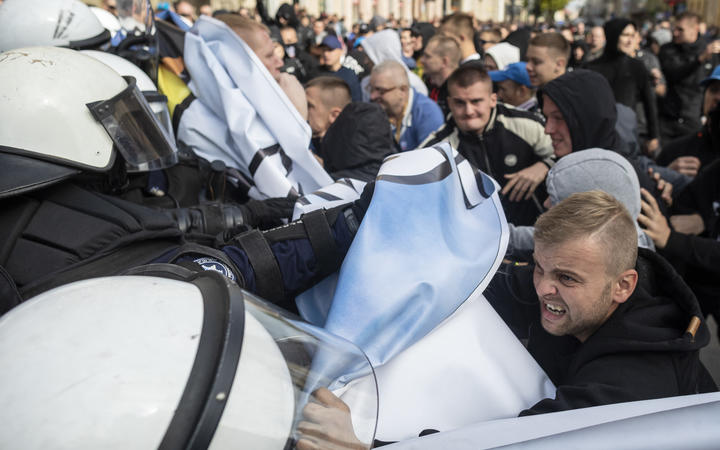 Far right extremists clash with riot police as they try to disrupt the Gay Pride parade in Lublin, eastern Poland, on September 28, 2019. Photo: AFP or licensors

In Poland, there are even LGBT-free zones, Hume says.

“About a third of the country at one point geographically, local authorities had declared themselves LGBT free zones.

“What we've seen in Poland since the right-wing populist Law and Justice Party came to power in 2015, has been this remarkable war on the LGBT community.”

Law and Justice came to power by targeting migrants at the height of the migration crisis, even though Poland wasn't on the main migration routes and has a tiny Muslim minority, Hume says.

“They found that works so well for them that they switched targets for subsequent election campaigns and really demonized LGBT [people] with stunningly homophobic comments from senior Polish politicians tweeting things like ‘Poland is most beautiful without LGBT’.”

Emboldening ultra nationalist groups, hooligans and Catholic hardliners, as a result there was shocking violence at Pride parades across the country, he says.

"They then more recently have moved on to rollback reproductive rights. Poland already had some of the most restrictive abortion laws in Europe, they've tightened them even further and that that drew a huge response from Polish woman who took to the streets in disgust at the government. It's sparked this roiling cultural war, which continues.

“You get the sense that this is a country fighting for its soul, torn between this traditionalist vision of a very homogenous Catholic nation and this Western facing liberal tolerant European democracy."

Hume says he doesn’t see the extreme right going away anytime soon but it is something governments are beginning to pay attention to.

“They were flat footed, because there has been such a focus on Islamist terror, but they're catching up.”

He says there needs to be more done to address online extremist content as the internet plays a huge role in pushing people towards this ideology.

“We're just seeing more generally a polarization of society in the internet age, and people getting in these online echo chambers. It feels like we're no longer tethered to this shared reality. There's so much extremist content out there, that just acts as pipelines to radicalization.”