Michael Moka (Ngapuhi, Te Rarawa, Ngati Hine and Mangaia of Cook Islands) left home at the age of 15 with his girlfriend Toria, the pair living in their car or staying with relatives and working multiple jobs to put themselves through school.

The couple made it work, grinding away working two or three jobs while going to school and studying.

“I guess we were angry so we did what we had to do to prove a point...when you talk about these things people start believing in these things and they might not be your family, they might be your community...you start popping these bubbles that you were tied to all the time.”

When Moka headed to university, he was connected with the First Foundation, who paired him with a mentor. At first he couldn't see how someone so different from himself could possibly understand him. But what followed was a friendship that taught him to dream big.

Now, Moka is the founder of Indigenous Growth, working with companies like SkyCity and Fletcher Building to develop employee programmes based on indigenous values. And he is now also a First Foundation mentor himself. 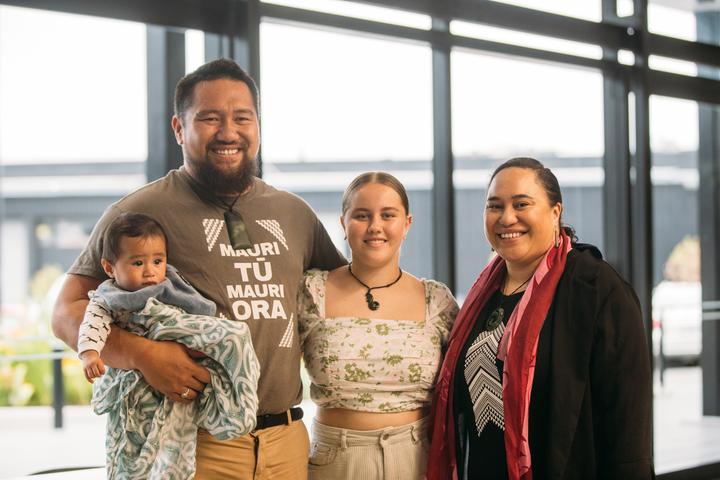 Michael Moka and his wife Tōria with their son Raukura O Te Huia, with the scholar they are supporting through First Foundation, Ella Harre. Photo: Supplied / First Foundation

Indigenous Growth is all about restoration of mauri and mana for whānau, Moka says.

“In regards to our people, they give the best of their time to work and then their families get the rest. So if you want to become a better version of yourself, sometimes you need to learn that type of stuff when you’re at mahi, at your highest energy times.”

Moka says if organisations want people to bring their whole selves to work and have the intrinsic motivation to perform well, be productive and have diversity of thought, they need to develop Māori.

“There’s a huge gap in terms of productivity among our people so our Māori and Pacific, 90 to 95 percent aren’t even making it past team leader or senior to middle management, let alone senior management.

“You know when there’s a tangi, we’re very much high performers, we can manage conflict, we can manage budgets and cater for hundreds yet we can’t become leaders of leaders?”

Organisations are missing out on huge potential, he says.

The Māori leadership programmes Indigenous Growth run are bespoke. But Moka says they require an organisation to be brave and have strong advocates.

“We don’t do this snowball approach where, you know, as organisations first they’ll do a bit of cultural competency, and then te reo and they try do a little bit but when you have a snowball it just gets bigger, bigger, bigger but there’s also some twigs and stuff that gets in the way. That’s called that cultural fatigue that a lot of our people experience.

“We take the avalanche approach where we do something really, really big and it impacts the organisation quite quickly.”

Before Indigenous Growth will engage with an organisation or business, Moka says they need to be ready to be vulnerable and have good intent.

“Once our people become taniwha it can become quite intimidating."