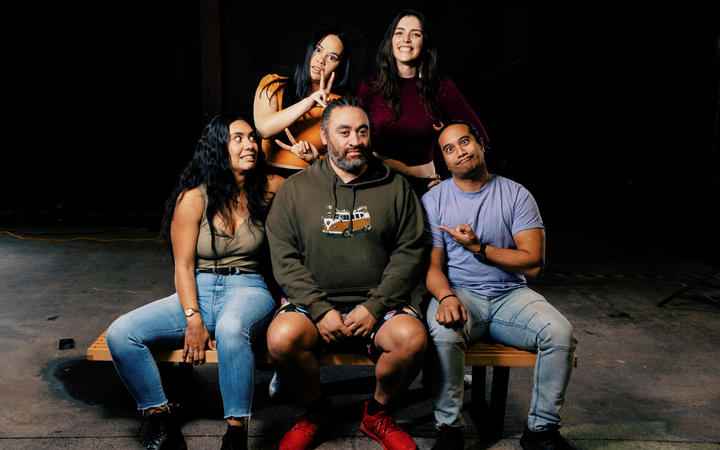 Since graduating from Unitec in 2001 he has worked as an actor, director, producer, and writer. As an actor, he is most well known for his 2011 portrayal of Kiwi icon Billy T James in the telemovie Billy.

The show is a comedy and Tukiwaho said the history of comedy in te ao Māori has been heavily influenced by the perspective of the late comedian Billy T James.

"One of the things that he [Billy T] did for us was that he managed to let us laugh at ourselves and in doing so he opened doorways and built bridges between some of the race relationship issues between Pākehā and Māori in Aotearoa."

Tukiwaho said he is aware a lot of Māori do not like being laughed at by Pākehā, but allowing Māori to laugh at themselves created healing.

"Something that he did say is that the Jewish people in America did a good job laughing at themselves and it helped them move past some of the negativity that they were feeling, he was mentioning that in reference to the time that he spent travelling around the world.

Racists Anonymous continues with the idea that there is healing in humour, he said.

Although 10 or so years ago there was the idea that social media gave everybody a voice, but Tukiwaho said that has changed more recently.

"Working with these younger actors and looking at my children I'm finding that they don't get to have a voice, they get a very loud voice if they agree with everyone else and if they don't agree 100 percent then they get shut down very quickly."

There was a danger in being shut-down particularly for topics such as racism because avoiding it meant "we're not addressing a lot of the history that brought us here", he said.

"A lot of the rangitahi in our room are just wanting to push boundaries, see how far they can go, they're just wanting to play with some of the things that they were called and there's healing in that, being able to voice the racism that was placed upon them.

"We've found more interesting ways to do that than just stand in a room and find racial slurs and throw them at each other, there's more nuance to it than that which is necessary, but I suppose I'm speaking more about the fear that they had approaching this initially because of the way our world at the moment and our conversation is guiding us at the moment - how it puts us into a bit of a box."

The title of Racists Anonymous was inspired by an actual group set up by a Californian pastor who set up a 12 step programme along the same lines as that used in Alcoholics Anonymous.

Tukiwaho does not want to undermine the programme since any work that helps shift someone's perspective when it has a negative impact on somebody else is positive. Nevertheless he found it funny, he said.

"As we dug into it, asking our audience to sit in a circle like you might do at some sort of communal meeting, asking our audience to stand up and speak a mantra around acknowledging your racism became quite fun. That we all stood up and said 'I am a racist and that's okay cause I'm trying hard every day' and just trying to move that way of perceiving racism because in actual fact we're all racist on some level."

Tukiwaho said he has racist thoughts and in his case generally they are jokes from the 1980s when comedy was full of racism.

"Perhaps bigotry rather than racism, but they're thoughts that can potentially hurt people if they were voiced."

There is no way to have a discussion if anyone who has a racist thought is considered to be a bad person, he said.

Simply erasing things that have hurt a portion of the community is not empowering those people, Tukiwaho said.

"To erase a history of all of things that have equalled pain for different sections of the community, I don't think the removal of those things empower the disempowered, I think it only empowers the people who were perpetuating it."