The hunt for a wine collection believed to have been hidden in a remote Georgian winery during the Second World War is at the centre of a new book, Stalin's Wine Cellar.

First owned by Nicholas II, the last Tsar of Russia, and later by Soviet leader Joseph Stalin, the collection is estimated to be worth millions of dollars.

Sydney-based co-author John Baker was a hotelier and rock 'n' roll promoter in the 1980s era of Midnight Oil, INXS and Cold Chisel and says he came to know about Stalin's wine stash when he started running wine stores in Sydney. 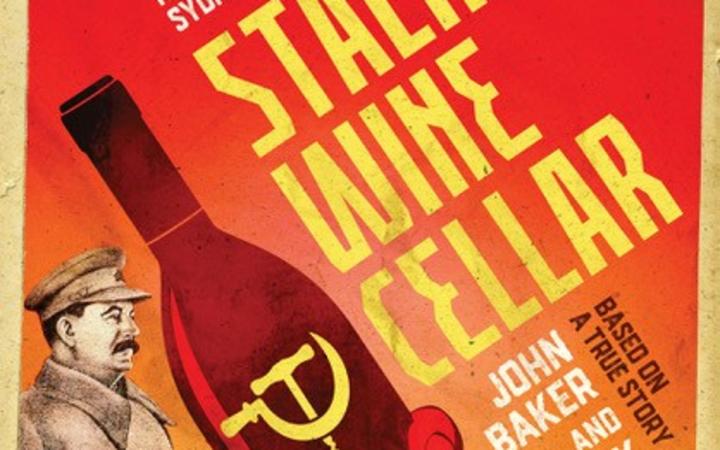 The point of difference for the wine shops was that they specialised in rare wines, old wines and private cellars.

One of their customers was a “colourful Eastern European gentlemen” who’d come along and offer to sell rare wines to them.

“He used to get really excited, his hands would shake and he’d say ‘John, this is fantastic, you have to buy this cellar’. Sometimes it was great, often it was very good.

“One time he faxed me a list of wine that was 30 pages long in 1998 or 1999 and the cover page just had an interesting question mark. For him to underplay something like that means it was interesting.”

He says that pages weren’t in French or English so they couldn’t parse much from it, but they did notice some of the dates next to the wines which showed they were from 1875 and earlier.

“Although I’d never really dealt in wines of this age, that was certainly interesting. So, I had to work out – if I could – what this was. I realised that this was a phonetic list of wine and the names were not the correct names but they were phonetical interpretations.

“I realised that someone, somewhere was reading out these labels and someone was recording it whatever language they were speaking and, when it came to the 1990s and they wanted to sell this wine, they translated the list back to English and ended up with a phonetic translation.”

When the penny dropped, and they realised the significance of the wines on the list – including some of the most prestigious French wines available – things became interesting.

He and a group of people got together and travelled to Georgia where they began to look for the wine cellar purported to be started by Nicholas II and inherited by Joseph Stalin.

Baker says the fall of the Soviet Union had left Georgia in a bit of a chaotic state and, when he was there, cash and guns were the rule of law.

“It was a bit Wild West; they were trying to re-establish themselves. You’d be having lunch and instead of people putting mobile phones on the table, they’d put guns on the table. It was a very different world for us.”

Their man on the ground in Georgia finally took them into the cellar after carting them from place to place around Tbilisi. Baker says it was very dark and wet.

“As we walked in, it was eerie, gloomy, dark, cobwebs everywhere, water running down the walls. I’ve been in a lot of French, Italian, and Australian cellars of quite some age, but this was really of a bygone era. It had a smell about it as well…. It was everything we expected when we finally got in there.”

While the water in the cellar had eroded the labels on the bottles, most wines have a stamped cork which helped with identifying the wine. They were able to check the wine out and he says they weren’t there to buy, but to authenticate the cellar.

“We weren’t sure whether this whole thing was a hoax. We were really there to look at these wines, inspect enough of them to get an idea whether it was genuine or not, and if the wines were genuine or not.”

The group were satisfied enough with the authenticity to proceed and Baker’s partner estimated the wines were worth around $AUD10 million. A twist of fate also allowed them to taste one of the most expensive and rare wines in the cellar when one of their group picked up a bottle in a precarious spot.

“He wasn’t particularly healthy or fit, the floor wasn’t perfect, the bottles were a bit wet. I saw him coming and I didn’t like the look of this and my sixth sense said ‘something’s gonna happen here’. As he came towards me, he moved the bottle from one hand to the other, it slipped and it fell.

“This is a 100 year old wine from one of the great houses and, having run wine shops for quite some time and dealt in rare bottles, I quickly slipped my foot out and got it under the bottle as it fell and broke it’s fall and scooped up the broken bottle.”

Baker ended up with the bottom half of the bottle with the liquid still inside.

“That gave us an opportunity to taste it which wouldn’t have happened if that incident didn’t occur and that wine was superb, it was ephemeral.”

They were able to get another bottle out and take it to the house if was from to have it authenticated. He says that bottle was also broken but doesn’t want to get into it – only that it made its way to France in a Perrier bottle.

It was a fortuitous mistake because they discovered the house where the wine comes from will no longer open bottles from prior to 1940 for authentication.

“It’s a bit of a minefield playing around with those bottles, particularly if you’re going to open them.”

Baker suspects that the bulk of the cellar was collected by Nicholas II and his father Alexander, but they’ve found some wines were definitely added after 1920.

“The whole historical and cultural significance of what this represented really overcame us. These wines were sitting in the cellar – in St Petersburg first and then Georgia – were living witness to the whole history of the 20th Century from the Russian Revolution, to the First World War, the Second World War, to the fall of the Berlin Wall. I was handling the history of the 20th Century, it was mind boggling.”

Baker and his team were offered a deal before heading to Georgia that they could clear the cellar for $1 million. By the time they had examined and verified the wines, it was decided $1 million wasn’t enough – and they never really knew who they were dealing with or who the actual owner of the cellar was.

Years went by of negotiations that were on again and off again and there were considerations of whether the wine could survive the journey out of Georgia, or indeed whether they could be considered a Georgian cultural heritage.

“When you get opportunities like this, you can say it’s too hard, let’s go home and not worry about it, or you can push ahead. I’m a push ahead sort of person, and sometimes you pull it off.”

Nonetheless, Baker is not in possession of the wine and, as far as he knows, it’s still in the cellar in Georgia. He believes that, when the book is published in Europe, it’s going to cause a bit of a kerfuffle with people trying to get their hands on them.

Baker even asked the publisher’s lawyer whether, if someone went in to try get the wines by force, they could be liable if Georgian police shot them.

“It could be interesting times when this book breaks in Europe and people hear about this and maybe want to try and get some of these wines.”

As for whether Baker will have another crack at buying the cellar, he’s adamant that he’s given up.

“No! I’ve bought and sold enough cellars. This is business. It didn’t work that time, but anyway, we’ve got a book out of it which is bewilderingly amazing to me.”