Isabel Allende: The Soul of A Woman

Best-selling author Isabel Allende’s new book – The Soul of A Woman - is part memoir, and part manifesto dedicated to the woman who's made her life possible.

The famous Latina author has seen what has been accomplished by the feminist movement in the course of her lifetime and hopes this book will light the torch for young women "to carry on the work still left to be finished". 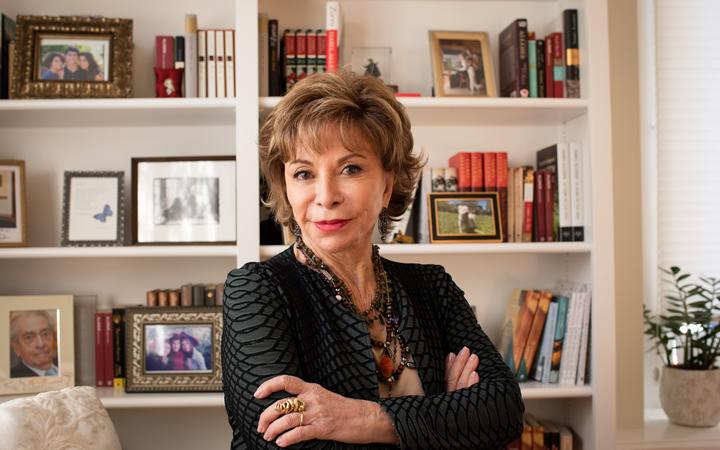 As a child, Allende watched her mother, abandoned by her husband, provide for her three small children in Chile, where it was socially seen as “totally unacceptable” for a woman to be separated from her husband.

“You had to put up with all kinds of violence and whatever for [the] husband, but never separate because that would be a public scandal, to the point that I was kicked out of the Ursulines nuns because of my mother's situation [at the age of six].

“They said it was because I was very rebellious. But I'm sure it was not the case.”

In the late 1960s, she rode the first wave of feminism.

But the 78-year-old says it took a long time to find her voice and it started with a feeling of anger while under the roof of her grandfather, where her mother lived with her siblings.

“She found herself like a charity case living in my grandfather's house and I saw her so vulnerable and poor, because she had no resources of any kind. She only had what my grandfather would give her.

“My mother never had any money for herself and no freedom, because at the time, she had to take care of her reputation.

“One of the things that I heard my grandfather say often – and my grandfather was a great guy, don't get me wrong - he would say ‘he who pays the bills, gives the orders’. To me, that was clear from very early on in my childhood, that I had to support myself if I wanted to have any kind of independence.

“That was what my mother couldn't do for herself, when she was stuck with three kids and no skills to work. So I think that that's where all the rebelliousness began for me.”

In 1972, Allende had to flee the country due to the military coup. She says she had vowed not to go back to the country if it remained in the same condition, but never thought the dictatorship would last so long.

Since the plebiscite in 1988 and end of military dictatorship, she has gone back to visit numerous times but by then she had established her family in California with her American husband.

“I was trying to become a citizen in California, because I wanted to sponsor my children to come here. So it was not the time to go back to live in Chile. And that was many, many years ago, and I've never gone back to live although I visit all the time.”

Despite modernisation and development, the country had a total abortion ban until 2017.

Allende, with her fierce determination to defend women’s rights, helped a woman get an illegal abortion at one point in Chile.

In 1981, she got a phone call saying her grandfather was dying in Chile, but she couldn't go back to say goodbye while in exile in Venezuela.

“I had written to him many letters during those years. I started another letter to tell him that he could go in peace, because I remembered everything he had ever told me, he was a great storyteller, and I remember everything about the family, it wouldn't be lost with me.”

“To prove that in a way, I started writing the story of my great aunt Rosa, who was my grandfather's first fiancee. As I was writing, in a matter of a couple of days, I realised that this was not a letter.”

Writing letters was common practice for Allende to talk with her mother too, whom got separated from at the age of about 16 because she lived in Turkey. Recently, her son told her they should digitalise the letters as they were getting old, and calculated they had about 24,000 letters together.

She says she felt the letter about her aunt was more of a memoir but didn’t question it any further at the time because she knew nothing about the book industry.

“By the end of the year, I had 560 pages in the kitchen counter, and that was my first novel.”

Again in the future, Allende used her letter writing habit as a way to keep her hospitalised daughter’s memories alive.

“I was just pacing the corridors of the hospital while she was in intensive care … I wrote letters to her, telling her who she was, where she came from, who was her family, her country, what had happened to her, because I had been told that people who are in a coma when they would wake up, they don't remember lots of things.”

Those letters along with ones to her mother eventually become a memoir too, Paula.

“I don't want to lose the grief. Grieving is something soft, like a soft animal that is always with me. Sometimes I have flashes of real pain in which I feel like being on my knees crying, but most of the time, I'm fine. If I'm sad, it’s because I loved her so much. If I remember her so much, it’s because she gave me so much in the 28 years that we shared. So I don't want to lose that. None of it.”

Foundation in honour of Paula

The death of her 29-year-old daughter in 1992 left her in a void, and her husband decided to get her out of her comfort zone and took her to India, where there was a poignant experience that propelled her to take action.

“We were in the middle of nowhere, it was very hot and the engine of the car was hot. The driver stopped to cool it with some water or something.”

In that deserted spot that had no village or well, they saw a group of women under a tree with children and approached them. The group become curious of the foreigners, and Allende gave them some bracelets they’d bought at the market.

“They were very happy … when we were leaving, one of the women gave me a little parcel of rags. I thought she was trying to give me something back for the bracelets. I said ‘no, no, it's not necessary’. I tried to give it back. But she insisted.

“I sort of separated the rags and inside was a newborn baby. The baby, I don't think it was a day old, the umbilical cord was fresh raw … the baby, I tried to give it back, but she wouldn't take it.

“And then the driver came running … took the baby and gave it to, I don't know if it was the mother or somebody else … and pushed me back to the car.”

She asked the driver later why the woman was giving her a baby.

“The driver said ‘it was a girl, who wants a girl?’ I think that about that girl all the time, she haunts me. I don't know if she would be alive today, maybe not. I couldn't do anything for her. But I knew what I was going to do when I returned home. And I created a foundation whose mission is to help women, like that mother, and girls, like that baby.”

The foundation aims to empower women to have their rights and give them skills to support themselves, by financing programmes and organisations.

After numerous rejections to publish her first book, she followed through with some advice and got an agent.

“It became the hit of the of the Frankfurt [Book] Fair. I got contracts for Germany, Italy, Portugal, everywhere. But I was living in Venezuela and all this was happening in Barcelona, really in my agent’s office. So I wasn't aware of the success of The House of the Spirits until I started getting the first cheques.”

She says she finally felt she had some “weight” to her name when she received the National Literature Prize in Chile.

“Now it's not as easy to pull me down there,” she says, referencing a Chilean term meaning people who get too successful are pulled down by their jackets.

“It's so Chilean, that if it doesn't happen to you, it's because you are nobody.”

She says receiving the Medal of Freedom in the United States was very important, because it's not usually bestowed on immigrants.

“But you know what the real award is? The readers, the readership, the fact that millions of people are reading [my books], and I get such fantastic feedback … that's the reward, the greatest reward.”