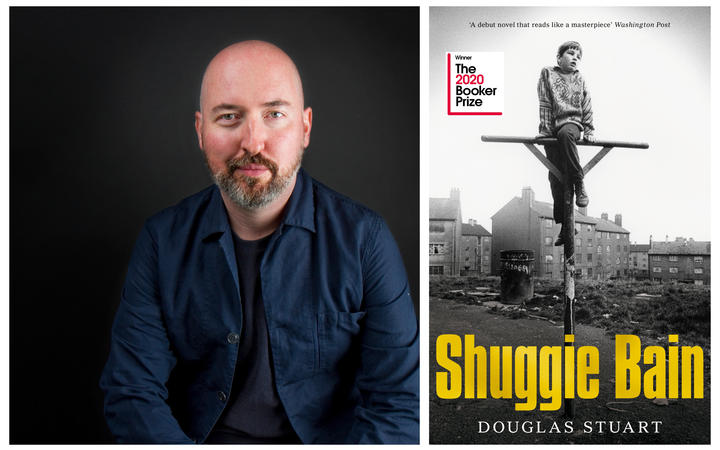 Before its success, the book was rejected more than 30 times by various publishers.

Set in 1980s Glasgow, it is a gritty story of a son's troubled relationship with his alcoholic mother, and is loosely based on Stuart's own experiences growing up in the city.

Based in New York City for the past 20 years, where he designed knitwear for some of the biggest names in fashion, Stuart has now given up his day job to focus on his writing full time.

And he's not resting on his laurels: after having several short stories published in The New Yorker, Stuart has already finished a second novel (titled Loch Awe) and is hard at work on a third, about the demise of the textile industry.

Stuart said he had always dreamed of becoming an author and sat down to write about 12 years ago.

He said initially he did not have any expectations of the book.

Stuart said Shuggie Bain draws on his own personal experience.

"I grew poor and queer, the youngest son of a single mother, who suffered with alcoholism my entire childhood and then lost her struggle with it."

He said his mother died about 30 years ago and when he sat down to write the book he was feeling a sense of loss both for his mother and for the city where he grew up as a boy.

Stuart said his working class Glaswegian roots seem very far off when he started writing the book in New York.

"I was writing for some sense of catharsis but also to reconnect two very different parts of myself I think."

He said quickly the book started to eclipse his own personal experience and he found he loved writing it, writing either first thing in the morning or after work.

"My absolute idea of heaven was I would fly to China about four or five times a year and that uninterrupted time on a plane was like a writer's retreat for me and no one could reach me and I was just spend my time thinking about my characters and writing."

Stuart said it was only towards the end of the 10 years that he thought of publishing the book and prior to that the only person who had read it was his husband.

Glasgow went through a tough time in the 1980s under Margaret Thatcher's government and unemployment rose to about 26 percent in the city, he said.

Stuart said despite the fact that his husband had often visited Glasgow with him, reading the book was still eye opening.

"He didn't really understand what it was like to grow up there, and to grow up with a mother who was disintegrating or in a community that was sort of coming apart, so when he read the book it gave him a deeper insight to me as man."

Coping with a parent's addiction

Stuart said children of addicts learn many techniques to cope with their parent's addiction and often the roles revert and in many ways the child ends up becoming the 'adult'.

"So much of what is in Shuggie are things that had happened to me or techniques or strategies I learnt to help my mother and to care for her."

Stuart said children do not have the experience to know that it is actually quite unusual for them to have to care for their parents.

Stuart said he portrayed the character of Agnes as a multi-faceted and complex woman prior to the point at which she becomes an addict.

"She is a generous, glamourous gregarious, determined but also very troubled and frustrated person."

Stuart said it is the hurt inside her which carries Agnes into addiction.

At its heart the book is a story about the tenacity of love and how the two characters manage to get up every day and carry on, he said.

Stuart said one of the book's themes is about how far you will go for unconditional love.

"One of the questions I hope the book raises is how far will you go to save the person you love the most before you save yourself."

'I saw a lot of violence'

Stuart said his childhood was complicated with a lot of laugh and loves but also sadness, violence and very sad humour.

He said the book sounds very sad because it is about addiction and loss but he also hopes that there is a lot of humour in it.

Stuart said he hopes the reader will come to the book with a sense of empathy and feel moved by it.

In the book, Shuggie's father 'Big Shug' is a Protestant taxi driver who turns out to be a "bad apple" who is a philanderer who ultimately abandons Agnes and his children.

Stuart said although he did not know his father he grew up as a young gay boy in a world controlled by men.

Stuart said big Shug was the embodiment of the patriarchy at the time.

Then Thatcher came along and the jobs went which had knock-on effects, one of which was lowering life expectancy by 14 years, Stuart said.

Stuart said he did not meet anyone gay until he went to university.

"Part of the sadness was after I left high school many many years later through the magic of social media other kids from my high school reached out to me and said 'I was gay too'."

Stuart said they could not even have solidarity at the time.

He said he was bullied because he was effeminate and a bit precocious.

Stuart said the gay role characters in the media were generally a point of comedy for being effeminate, so there were no role models there.