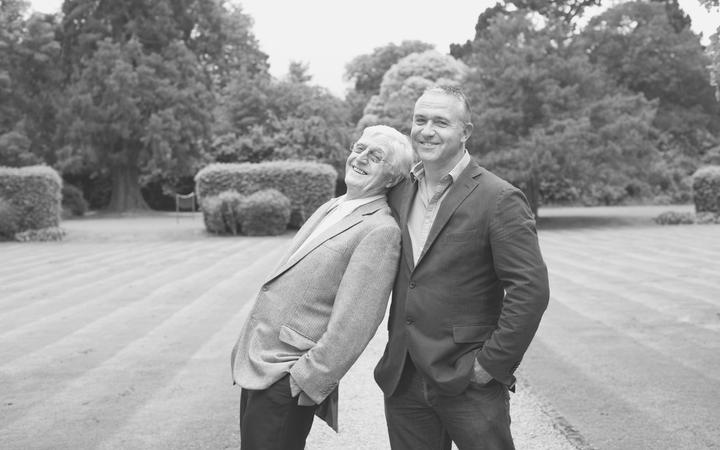 The son of a Yorkshire coal miner, he left school early and joined the BBC with a Northern accent and without the benefits of an Oxbridge education.

He had to fight impostor syndrome and people's preconceptions as he made it as an interviewer, going on to speak to thousands of the biggest celebrity names.

While writing his latest book, Like Father, Like Son: A Family's Story, Sir Michael (now aged 85) spent some time in hospital. But when he got out, he found it difficult to get back into writing.

"I had not an idea in my head, I could spell and all that but I just didn't have an idea, I had no way of getting into writing," he said.

So he enlisted his son Mike, who reshaped the book and gave it a definition.

"He started writing about the miners themselves, about the job itself, what it was about, and brought it a different kind of a serious and beautifully written account of this extraordinary tribe of men who went in a hole in the ground, like my father, and 40 years later emerged with pneumoconiosis and died."

Reflecting on his research for the book, Mike said there were two things that particularly horrified him - the physical aspects of the job and working in darkness.

"The awful thing about them was they were a forgotten people, everything happened underground," he said. "If you drove past them you would only see the pit head workers, you wouldn't understand that beneath that, 1000 metres under your ground, people were working in unimaginable conditions."

It was a job that broke men physically, mentally and spiritually, he said.

Above all, he took on the difficult job out of love for his family.

"He loved the two of us beyond measure, he treated both of us with a great respect and love. He never raised a finger to me," Sir Michael said.

He got to experience the nature of his father's work at about 14 or 15, when he was taken down into the pit.

"I've never been so frightened in my life," he said. "What appalled me most of all was the seam that they worked in. My father worked in a seam that was about three-foot, maybe a bit less than that."

To start work he had to crawl on his stomach for around an hour and then he would work for another eight or nine hours, "digging coal on his belly".

"He never ever complained and all he could think of was to make myself and my mum happy, for that would have been his greatest fulfilment in life."

Sir Michael's relationship with his father would also have impact on his son Mike. Going from his working class background to the upper echelons of the BBC, gave him an "enormous drive", according to his son.

"That makes it harder to become that kind of nurturing father that my grandfather was, because in the end, my grandfather when he left the pit, he breathed a sigh of relief and all he wanted to do was spend time on a cricket field with his son.

"When my father was at work, all he wanted to do was make sure he kept going, kept striving, because he just thought he shouldn't be there - and that makes a very neurotic person and I think that doesn't make a natural father."

While Sir Michael said he was a bit upset about what Mike wrote about him and also his mother - whom his son described as having a "ruthless ambition" for him to be successful - but thought it was important for the book to be an honest account.

"I came to the conclusion if I was honest that it was true and there was no good writing in this book about family life unless you allowed observations that were uncomfortable."

According to Mike, his experience of the book was "to separate the figure of a father from being a human".

"He's shaped by forces way beyond you or what you've even thought of," he said. "And so when you're born to that man, you can't expect him suddenly to become like the father out of a Doctor Spock child-rearing handbook."

Becoming a father himself, Mike said it was common to go on in the early days about how you'll never be like your own father.

"But then you find yourself issuing diktats and comments and you think, 'Christ, I sound exactly like my father'."

However, when it came to parenting advice, he found his father had become the "perfect person to go to".

"My mother tends to full of Celtic gloom and emotion, whereas my father can say I understand why you're upset but let's think about it, and he's very good in that way."

Despite his father's shortcomings, Mike said he had a happy childhood, just with a few caveats.

"In general terms I had a happy childhood, because I never felt abandoned or isolated or unloved and I honestly think that's really all you can make a child feel."

And for Sir Michael looking back on his own father, he said he felt "very lucky to have been born of such a good man."

"When Piers Morgan asked me what my thoughts were at the end of the interview last year about my father, I said he's a better man than I ever could have been.

"He had a simplicity around him which I don't have. I'm a far more complicated person than he, and I often because of those complications, I think secretly I wish I was like you."