Ben Harper: "just me and my lap steel guitar"

Since his 1994 debut Harper has pushed musical boundaries, mixing folk, blues, hard rock, country, jazz and reggae - but his lap steel guitar has been ever present. 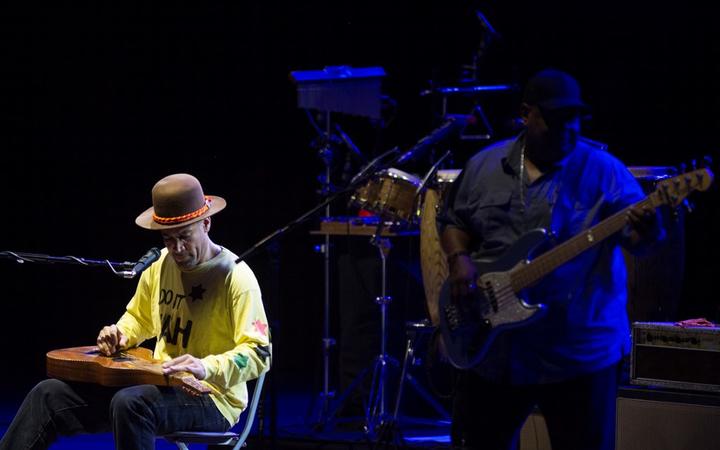 Now he's put his Monteleone guitar front and centre, with the release of a solo instrumental album Winter Is For Lovers.

Releasing an album with no lyrics felt “aggressively fragile,” he told Kim Hill.

“It just feels sonically raw, and fragile and is kind of a tap on the shoulder in a way to me.”

It’s another chapter in Harper’s varied career, one which he says is not entirely driven by commercial considerations.

“The hits that I’ve had were despite the circumstances, in other words they were as much of a surprise to myself and the record labels, not to say there wasn’t a lot of work put into them.

“I consider myself to be somewhat punk rock in that regard, but I’m not so punk rock that I don’t care about whether something fails or succeeds, because it’s a metric and an important one to stay consistent whether it be touring or being able to afford to make records which have the potential to reach people.”

His collaboration with revered bluesman Charlie Musselwhite on Get Up! in 2013 won Harper his third Grammy (best blues album) and the pair reunited in 2018 for a blues follow up No Mercy in This Land.

Harper has no truck with the idea that white musicians playing the blues is cultural appropriation.

“If you’re going to get hung up on whether Stevie Ray Vaughn is the best blues player or not, you’ll be hard pressed to find somebody more soulful or better, you want to find a better harmonica player than Charlie Musselwhite? Black or white? What’s the point? You close your eyes you’re not going to know the difference.”

Harper grew up surrounded by music, he says. His grandparents owned a famous music store and folk music hang-out The Folk Music Center and Museum in California.

“He was always a beacon of musical light and hope for me, just a permanent well of motivation and inspiration. He gave me my first professional gig, he was always a family friend, Taj knew my grandparents and my parents before I was born.”

Harper’s father struggled with and eventually died of alcoholism, and three years ago Harper quit drinking.

“If there were Grammies for alcoholism he would have had a shelf full,” he says of his father who was a high functioning alcoholic.

“It’s the best thing I’ve ever done, bar none.”

Not that it was easy, he says.

“You have to be the odd man out and get used to it. And also just your own cravings, but once you can get past the cravings … you know a good friend of mine I called him I was struggling with it in the first six months and I was in New York and New York is a real hard place to not drink. And he said Ben don’t drink, just eat, eat, eat!”

Harper plans for touring are currently on hold, he says.