The right to whakapapa: Jade Morgan

Jade Morgan has not let a six-year prison sentence and early gang ties define him. 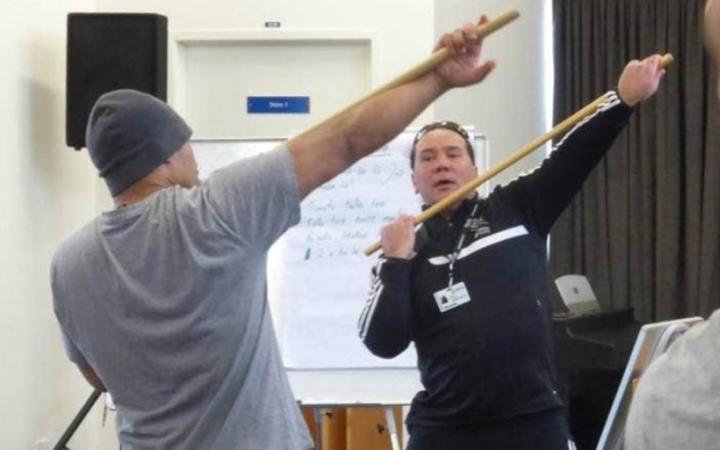 His work reconnecting Dunedin prisoners with their whakapapa using te ao Māori - whether that's through martial arts, kapa haka or oratory - has been recognised with a national Te Putanga Toi Arts Access Award.

He has been running his tikanga programme, Te Hōkai Manea Tipuna (the glowing footsteps of our ancestors) at the Otago Corrections Facility since 2017.

Morgan saw his own life changing course when he started connecting to his culture during his time in prison in the 1990s. He said this cultural access should be a right offered to everyone.

He said his programme was developed after it was identified by prison staff and inmates that they wanted some cultural engagement activities, that were "meaningful and authentic".

"My programme centres around Māori martial arts and the disciplines and everything else that underpins the physical activity, the taha [Māori], whare tapa whā aspects of wellbeing."

Morgan said people have extolled the virtues of martial arts from other cultures such as karate, judo and kung fu.

"Here in Aotearoa, we have just as powerful idioms and sayings and inspirational ideals that have been grown here, and therefore there is a strong feeling and sentiment that these ways are a lot more effective for helping people change their lives and ultimately save lives."

Morgan said although he had never been a gang member, he was brought up in a Mongrel Mob environment.

He said there was a lot of horror in his upbringing but there were some good times.

The bullying ceased after that, he said.

He said his mother spent time in jail and he was essentially adopted by his great aunt.

Morgan describes his mother as his superhero saying she ultimately cut her connections with the gang and had the strength, resilience and determination to move on.

When they left Dunedin and returned to Christchurch, she got sober and furthered her education, Morgan said.

"And that stuck, that seed of seeing her take up that struggle of education of wanting more and wanting a better life for us."

Asked how he ended up being sentenced to six years in prison, Morgan said he rebelled against the lifestyle of "entrenched gangsterism".

He said the day of his crime started when he was a 19-year-old and went for a drink with a friend and things spiralled down from there.

Another friend arrived at the house with some stolen goods and they decided to take things further.

"The drunker I got, the more exciting it sounded," Morgan said.

"So unfortunately we went around committing a series of aggravated robberies involving a firearm and thank heavens I was caught, and that's the day that my life changed for the better."

He said it was his first offence and he has not been in trouble since.

Morgan said when he was first imprisoned he wanted to blame everybody and it took him two years "to get over myself".

He said he had a moment in Paparua Prison when he was priming himself to act the tough guy but then realised he was lying to himself.

Morgan said when asked by a prison staff what he wanted to do during his time in prison he answered "anything Māori".

He was told that was "a bit political".

"I said 'hey look mate for 18, 19 years of my life I've been living in te ao Pākehā and look where it's gotten me', so I believed that going back to my roots ... was going to be the pathway that I knew was going to lead me to wellbeing."

He said that has worked and also allowed him to connect with other people with similar experiences and to show them there is hope for change if that's what they want.

"How long have we been going down the paradigm of not allowing Māori to have a go at reducing offending and ultimately heal their community?

"We've been going down a colonised system for so long and it's not working, so let's try something else, let's give it a go and hopefully, I believe we will start to see the results that we're all looking for."