Despite a fear of flying, conservationist and adventurer Sacha Dench  took to the sky in a flimsy-looking motorised paraglider to follow birds' migration routes.

Called the 'human swan', her first mission in 2016 involved her flying 7000km across 11 countries to track the migrating Bewick's Swan across the Russian tundra to the UK. 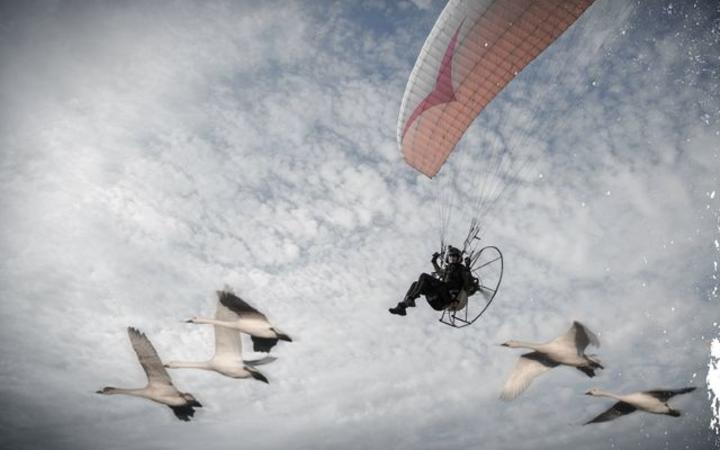 Her next project has been delayed until next year by the coronavirus pandemic but involves following ospreys across Europe to West Africa.

Also in the pipeline is an even longer expedition from Alaska across Asia down to New Zealand.

Dench told Saturday Morning she overcame her fear of flying over a long period, taking a five-year counter-phobic route to doing so, with many unpleasant bumps along the way.

“It wasn’t a rapid transition from one to the other,” she says. Being of an adventurous disposition and having a commitment to advancing her conservation work helped in that turbulent transition.

Her career as a biologist focusing on marine turtles became more noticed when she won the Australian free diving championships. For her, being good for free diving was just a means of bettering her ability to be a marine biological, more able to free marine animals from shark nets, among other tasks. But the medals opened doors for her professionally.

Being in the sea was her natural home, but what did not come naturally was flying. “There was no way in the world I would have ever been competing at anything to do with flying," she says.

“The only reason I got into the flying was because of this horrible fear I had, even when I was in airplanes just on take-off and landing when there’s always a bit of turbulence.”

The counter-phobic response of forcing herself into the air to overcome her irrational fears led her into paragliding, which she says was absolutely terrifying for her.

She attempted to engage her scientific brain while being dragged up into the air and then released by another plane, finding thermals to gain in altitude, while trying to work out the mechanics of wind, flying and airplanes.

“Once I had learned to fly the paraglider – it took me two years of suffering and I wasn’t enjoying it – then I started seeing the odd thermal and catching thermal and thinking ‘maybe I can start to enjoy this’.

“And then I saw somebody with a paramotor and realised that with a propeller on your back you didn’t need to fly in the middle of the day when there’s air going up, you could put the whole aircraft in the back of your car and fly it anyway.”

The benefits of using a motorised wing as part of her work started to become apparent. She was able to photograph conservation wetlands while tracking migratory birds, taking striking images.

“It was realising actually the power motor would got me to do amazing things for conservation. That’s I suppose why I stuck at it, but it took me really about five years before being completely comfortable.”

Using the power motor was not only a way fly with the birds, but to attempt to get into their instinctual mind, she says.

“With migratory birds in general one of the big problems is in all the different countries they fly over, we make assumptions about where they’re breeding and wintering, we make different assumptions about how to fix those problems, but there’s nothing like being able to go and talk to people and that’s really what I needed to do.

"So, taking off and landing on your feet – I can pretty much stop anywhere, remote communities in the Russian Arctic where there’s just nomads who are travelling with reindeer. There’s no way you can travel in vehicles.

“It’s a fantastic tool logistically, but also for meeting people and I can really get inside the head of the birds because we go the same altitudes, the same speeds. I can see the sort of rest and stopover sites they’re looking for. I can go to those same places and from the air see what they threats may be.”

One of the highlights for her was when several birds broke off from their V-formation fight pattern when over the Arctic wetlands and joined her after checking her out for several miles. Initially she was worried they’d be injured if they got too close to the motor.

“Just as I was about to do a rapid manoeuvre to get away from them they tucked in behind my right wing tip a bit higher than me and they flew their riding the vortex of my wing tip and it was just the best moment of my life… it was a magical moment out in the middle of nowhere.”

There were risks involved in flying in the territory. Local indigenous communities shoot the birds for food, particularly during hunting season when tourists visit to do just that.

“Up in the Russian arctic there is no agriculture. It is permafrost and so people eat predominantly reindeer, also fish, but also birds… but we did need to do something to stop the decline of the Bewick swans,” she says.

When landing within indigenous communities and approaching people, Dench says people are both surprised and receptive to her questions and concerns as a conservationist.

“As soon as people see what you are prepared to put your body through in order to be following swans and doing something for them, their instant reaction is to ask ‘what could I possibly do to help and if you care so much, let us more’. I’ve had really interesting conversations with them.”

Now there are communities along the entire flight route willing to help, with many making moves to find alternatives to lead bullets to minimise environmental impacts of hunting, she says.

Engaging with those communities is not about educating them at all, it’s about sharing the knowledge we have and saying ‘have you got ideas for who we can help it’. That’s how we’re making a difference now after 25 years of swan decline.”