The unknowns behind a Covid-19 vaccine: 'It's an unwritten book' - Dr Chris Smith

While vaccines for the Covid-19 virus were still under development, it's still not known if antibodies from the virus would stay or go after recovery, says clinical virologist Dr Chris Smith. 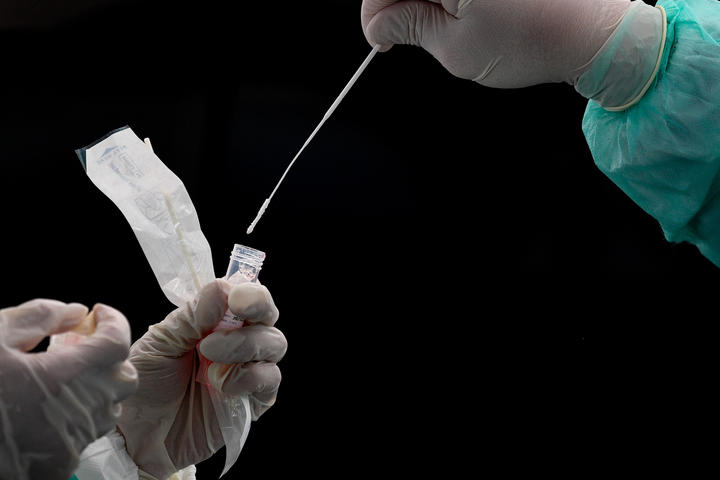 The Cambridge University consultant clinical virologist spoke to Kim Hill about a growing understanding of the widespread (and sometimes long term) damage that Covid-19 can do to the body and the potential for a vaccine.

While vaccines for the virus were still under development, he said at the moment, scientists didn't know enough about the virus to know if antibodies from the virus would stay or go after recovery.

He said with other coronaviruses, these antibodies tended to disappear within a year or so.

"They're worried if we can't drive a long-term immune response, against this class of viruses, it does undermine the potential a vaccine can deliver," he said.

A potential vaccine might not work to prevent infection, but rather to mitigate its effects.

Studies done by the Jenner Institute had seen the virus shipped to America to be put into monkeys - a reasonable test model for catching Covid.

"Those monkeys that were vaccinated did not develop severe disease, unlike the control animals, but they did nevertheless get infected and were, unfortunately, able to pass the infection on," he said.

"But it's still a win in some respects, because if you can mitigate the impact of infection then you've got some way of preventing people from getting severe disease, which at the end of the day, that's what we're most worried about."

A difference in droplets

There has also been a push from scientists to declare Covid-19 as an airborne disease.

In an open letter to the World Health Organisation (WHO) on Monday, 239 scientists in 32 countries have said that coronavirus spreads through the air as aerosol.

Dr Smith said the WHO had not changed anything as yet, but that they had acknowledged the letter where they previously had not and a conversation was scheduled.

He said previous messaging had been around large droplets - which were emitted when people coughed, sneezed or even just talked. These droplets are heavy, do not travel far and tend to land on the ground.

"People seem to obsess about these big droplets and they ignore the small ones," he said. "The small ones are really super fine droplets."

These small droplets can be generated through aerosol procedures in hospitals, such as intubating patients.

"Because they're smaller, they bob around in the air for longer, they travel farther and they could therefore encroach on people much more than the social distancing measure. They also go straight through and around masks much more easily."

If Covid-19 was spread through small droplets, Smith said there would need to be more consideration on how air circulates - and more infections would likely be seen in winter, when everyone retreated indoors.

Evidence around the long-term effects of Covid-19 was also beginning to emerge - with a recent study from the journal Brain looking at neurological changes in patients with Covid-19.

Smith said in some cases, people had become unconscious and never woken up. Later, inflammation was found in the brain stem - in particular, the area where the Vagus nerve originates.

This nerve runs down to the intestinal system - which is potentially a route  of contact into the central nervous system, as coronavirus can replicate in the gut.

Other studies had also found effects on the heart, kidney damage, liver damage and people developing a diabetic-like metabolism after recovering.

Others had suffered from "longhaul Covid symptoms", where even two months after infection, they still weren't feeling well.

"Coronavirus infects you, causes an inflammatory response, and in some people that's mitigated or blunted or dealt with very quickly, but in others, it goes into a sort of immunological tailspin, and it ceases to be all about the virus," he said.

But as yet, much still remains unknown about Covid-19 - as Dr Smith says, "it's an unwritten book".