Actor Jesse Eisenberg is best known for his portrayal of Facebook founder Mark Zuckerberg in the 2010 movie The Social Network.

In his latest role he's playing Marcel Marceau in a little-known episode of the mime artist's life story: a daring attempt to rescue 120 Jewish orphans from the Nazis in the Second World War. 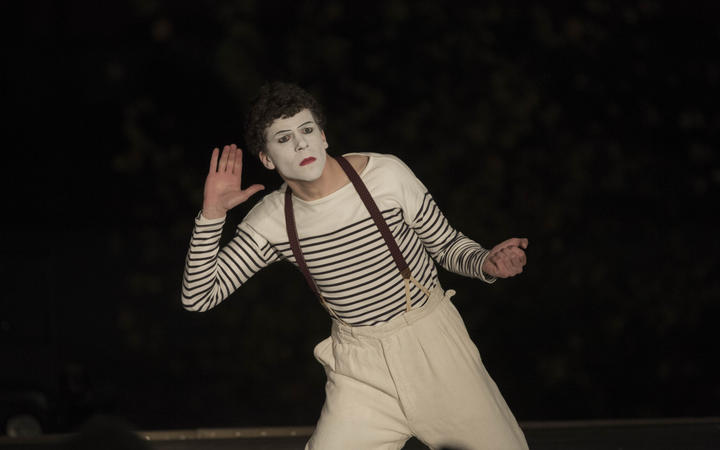 Listen to the full interview:

He spoke to Kim Hill from Bloomington, Indiana, where he's currently helping out at his mother's domestic violence shelter.

"We knew once the students started going home, they were going to lose volunteers and we love Bloomington," he says.

The film is personal to Eisenberg, whose Polish family were survivors and victims of World War II.

"When I learned about my family's story of survival, my first thought was that this must be the most unbelievable story throughout all of human civilisation. And then, you read other people's stories of survival and you have the exact same feeling about those stories.

"It occurred to me that if a Jewish person survives the war in Europe, it usually requires some sort of miracle, some kind of unbelievable situation, and a hero - someone who is risking their lives to save them.

"And so, this story Resistance."

Eisenberg says his father's family left Poland in 1918, but the rest of the family remained. Most were shot in a Jewish cemetery apart from his cousin, a young girl, who was taken in by a Catholic family.

He wrote a play about the story where he plays a fictional version of himself as an entitled American meeting visiting her and coming to terms with his privileged life and her trauma.

One of the things that drew Eisenberg to Resistance was that it portrays a strong Jewish resistance, rather than just showing Jews as victims.

"What this movie does so well is that it empowers Jews, but not in a false way - it doesn't imply certain movie tropes onto the Jewish characters - it takes what it is that they do well; artistry, humour, cleverness, it celebrates those things and shows how they can be weapons of war or tools for being a saviour.

"It celebrates all the things I love about Jewish culture but in the context of a heroic story."