Director Kitty Green on her new film, The Assistant

Director of The Assistant Kitty Green says her new movie is much more than a portrayal of sexual harassment in the wake of disgraced movie mogul Harvey Weinstein's prosecution.

The Australian writer and director's film presents a day in the life of a female assistant to a powerful executive.

It is a work of fiction, but its portrayal of insidious office relationships is very much a product of the #MeToo age. 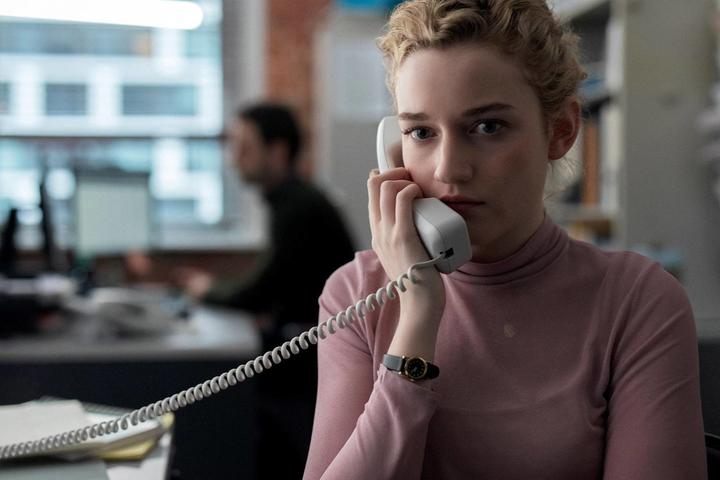 Starring Julia Garner and Matthew Macfadyen, the film was released in New Zealand on 28 May.

Jane, a recent college graduate and aspiring film producer, gets her dream job as a junior assistant to a powerful entertainment mogul. But as she follows her daily routine it becomes clear abusive interactions colour every aspect of her workday. An accumulation of degradations finally prompts her to self-champion and fight her corner.

Green says she had been working on the movie after witnessing inappropriate behaviour on the film festival circuit for over 10 years, before the Weinstein story broke.

“I started working on something about misconduct in general and I was talking to US college students about that because that was the way those conversations were happening at the time and then the Harvey Weinstein story broke and I started shifting focus and spoke to a lot of people who worked for him and a lot of other people who worked for predatory men and other abusive – verbally abusive – bosses and that became the line of enquiry.”

Green, who’s previous documentaries include Casting JonBenét (2017) and Ukraine Is Not a Brothel (2013), says although there are obvious references to Weinstein in the dark drama, the film is a much more systemic look at power dynamics and oppressive working environments.

It is the reason we never see the boss, making it a more atmospheric and foreboding experience for the audience, she says.

“I always wanted to make something that centred on women, and I thought we’d had enough stories about these bad man.

“I felt like the media was focusing on these predators, as opposed to bigger systemic and cultural issues that were keeping women out of power.

Cinematographer Michael Nathan plays a big role in creating a menacing mundanity, stirring the suspense and atmosphere of doom for the employees.

“It was about creating tension and in mood, but also not leaning too much into a horror feel. We wanted it to feel like an authentic work place,” she says.

Actress Julia Garner gives an extraordinary performance, bringing to life the humdrum routine of the character she plays.

“I was looking for someone who, I said ‘infinitely watchable’ to the casting agent because it’s really her doing a succession of very mundane tasks,” Green says. “So, you need to be intrigued by her, there has to be something striking about her and Julia’s name came up and I’d been her in The Americans show and immediately when I saw her I thought ‘oh, that girl’s interesting’… We kind of worked out that character together.”

Her boss is not the only one behaving badly, with practically everyone she works with treating her with contempt.

A woman at the office is particularly contemptuous of younger females there, expressing no empathy or care for them. Hence, a culture of silence and the wider cut-throat environment many people experience in the work place is something highlighted in the movie too.

“I feel like we’re all in some ways complicit in this system that’s hurt and sidelined women forever. And we all play a part in it everyday and I kind of wanted to get everyone to walk away from the movie thinking it interrogated their own behaviour.

“How can we treat our work colleagues? How can we have an more equitable and fairer working environment? Those kind of questions.”

The movie explores a predicament many are faced with regarding the absence of total proof or certainty as to what is actually going on when nobody is looking. This can not only lead to problems when approaching a human resources department with a complaint, it can also create a very damaging cognitive dissonance suffered by the victim.

The character of the HR manager, played by McFadyen, is particularly sinister.

“Firstly, I was trying to point out that HR departments are there to protect the company, more so than the employees and I was looking for an example of gaslighting in the film,” she says. “The women I spoke who worked in these types of environments spoke about being gaslit by their companies to kind of question what they saw or doubt their own sanity.”

Green has had her own experience of sexism within the industry, with one reporter asking her if she got her ideas for movies from male work associates. Green sees ignorance being as prevalent as malignant misogyny.

“I tried to explain that I come up with my own ideas, I think that as a woman I’m taught to be polite. But I didn’t push back on it and I should have, although this whole film is some kind of push back,” she says.

Because the film is set during a certain period, Green says there have suggestions these problems don’t exist anymore, or at least as much as they once did. She says one male critic expressed that view in a review, which she finds shocking.

“A lot of the behaviour in the film is not necessarily a film about sexual assault. There so much in there, like micro-aggressions. I wanted to amplify all those little moments that can really affect a young woman or person’s self-confidence and career trajectory…

“There is still a lot of that around, a lot of that still needs to be addressed and I’m hoping that the film demonstrates that for audiences, that they can pick up on bits and bobs of their own behaviour that are perhaps more inappropriate then they suspect.”