It's likely Covid-19 has a higher reproductive rate than first believed, but evidence shows wearing a mask won't help protect you from getting it, a UK virologist says.

Dr Chris Smith, consultant clinical virologist at Cambridge University and one of BBC Radio 5 Live's Naked Scientists, spoke to Kim Hill on Saturday Morning about contact tracing, face mask use and whether animals could pass the infection on to other animals and humans. 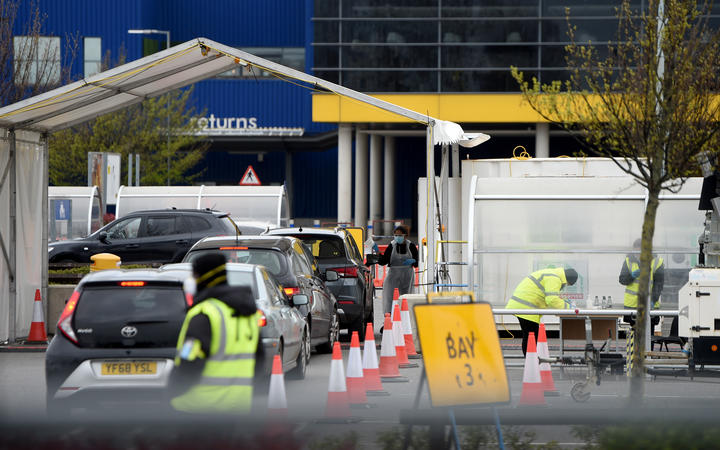 A long queue of cars wait at a coronavirus drive-through testing station set up at the for NHS staff in London. Photo: AFP

Dr Smith said it was clear from the outset that the majority of cases were trivial, but it's now also clear some people who have the virus are asymptomatic and infectious.

Citing a recent medical paper, Dr Smith said it was now believed the infection's attack rate was close to a few percent, so two to three million people in the UK have probably already had the virus.

This reflected what he was seeing in the testing centre he was managing. Initially about 5 percent of the tests were returning positive results, then that jumped to one third of tests and last weekend 50 percent of tests came back positive.

It was clear the reproductive number - how many people became infected from one person - was higher than first expected.

But Dr Smith is adamant masks do not help protect people from catching the illness.

There's been conflicting advice on the use of masks, with many medical experts saying they do nothing, yet the United States Centers for Disease Control and Prevention has issued guidance to the public to use them.

"One possible kernel of truth, and this might be in the same way that we could sneeze into a hanky and mitigate the spread of it, if you've got a face mask on and you're symptomatic and you cough on somebody it will probably reduce the amount of virus you deluge them in. So that may make a difference, but for the average passive wearer who's not ill, probably no benefit."

While the virus is propelled through the air if an infected person coughed or sneezed, it may also be spread just through someone breathing near someone else.

"But the key thing is not whether or not that's true, it's whether or not I then put a piece of material over my face, which quickly gets damp, which has got gaps around the side and doesn't fit my face properly, and quite quickly all the particles that land in the front work their way through the dampness and then into me - that's the question, and that's what I am disputing is any benefit.

"Now I'll hold my hands up, if someone can show me the evidence this cuts down infection rates then I'll reverse my position, but I'm going by the evidence presented at the moment by people who know a lot more about this than me who have told me there is no evidence at the moment to support widescale adoption of this practice - it's cosmetic, it's not effective."

Dr Smith said masks used in hospitals were on a different level to what the public used, and medical masks excluded particles smaller than the virus - on the way in and out.

Masks could also give a false sense of security, he said, because even if a person is wearing a mask, the virus can enter through your eyes as the eyes are connected to the nose through the tear duct.

"Anything that lands on your eyes...they then drain down into the nose and they can find the tissues they want to infect down there too, so you must protect your eyes too."

As for the risk of animals catching the virus and passing it on, Dr Smith said there were a lot of unanswered questions and he believed there would be a lot of research going on in this area.

In one case in Hong Kong it was believed somebody who had the virus gave it to their dog, but the dog had such a low level it was probably below the infectious dose.