Pioneering Nepalese eye surgeon Dr Sanduk Ruit grew up in the far, northeast of the country, at the foothills of Mt Kangchenjunga, beside a glacier river.

His village had no schools, no electricity, about 100 houses and a monastery.

His father, a part-time monk, had to walk Ruit to boarding school in Darjeeling at age seven. It was a journey that took 15 days.

But Ruit says it taught him to be tough and to be able to face challenges.

With no option to proceed to higher education in the local area, Ruit’s father decided to take him to Kathmandu, via India, where there were opportunities for him to pursue his ambitions for a medical career. 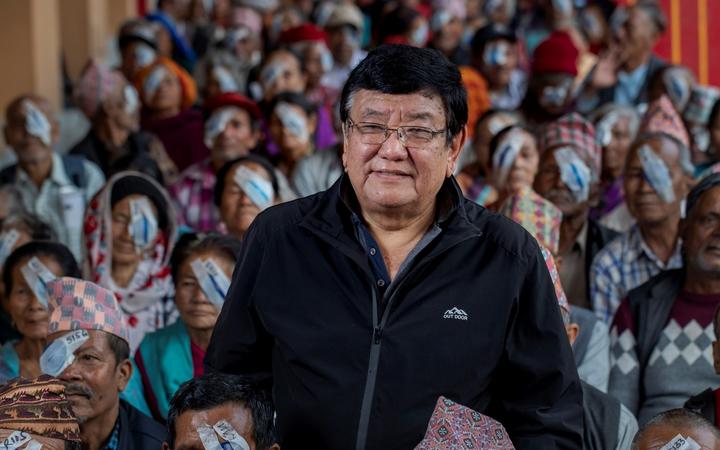 When Ruit came up as a young ophthalmologist in the early 1980s, the convention of doing cataract surgery in most developing nations was just removing the cataract. It was an outdated technique.

“As always, he believed in equity.”

The pair struggled for 7-10 years in Nepal to develop a small incision technique that was feasible logistically in the region.

Then, one morning Ruit called Hollows to tell him he had successfully used the technique.

Hollows was fascinated by the post-op results, but the local and international community still thought it was too complicated and too expensive for countries such as Nepal.

“We knew we had to prove it, so we had no option except to write some medical, scientific papers to study the short and the long-term results of this technique…there [was] continuing skepticism for another 10 years until we proved [it in] Nepal by doing a clinical trial where we invited a very nice, very fine American surgeon David Chang.”

Chang was well known for his modern cataract surgery technique.

The results of the clinical trial in Nepal were found to be comparable to the results using Chang's technique. Ruit and Hollows finally gained recognition internationally

Ruit has now saved the sight of an estimated 130,000 people around the world.

In the early 1990s, Ruit began encouraging people in Nepal to allow their corneas to be harvested at death. Corneas at the time came from the United States.

He and his team began to work at a cremation site to overcome a cultural obstacle to donation.

“The concept for Nepalese Hindus are if people die they are taken to the cremation as soon as possible, they say the body should be warm for cremation. So, we had to do a lot of public awareness around the cremation.”

One of the things they did was install a small information booth at the crematorium.

Then, Ruit’s team showed the cremation logistics person and his assistants what a transplant is, and how it’s done.

Finally, the team put a small room right next to the crematorium where corneas could be donated before cremation.

As cornea are a tissue and not an organ, it is easier for people to get on board, he says.

They now get about 1000 corneas donated every year.

“We even now send corneas out to other countries.”