Australian moral philosopher and professor at Princeton University, Peter Singer's work challenges people to question whether their behaviour is ethical and highlights blind-spots and moral inconsistencies in our actions.

He's a champion for animal rights and believes those born in rich countries have a moral obligation to help those living in poverty.

He has also argued for the rights of parents to euthanise severely disabled newborns.

Criticism from members of New Zealand's disabled community over his views has prompted SkyCity Auckland to cancel a speaking appearance booked at the venue for June, citing fears that his appearance could damage its reputation. 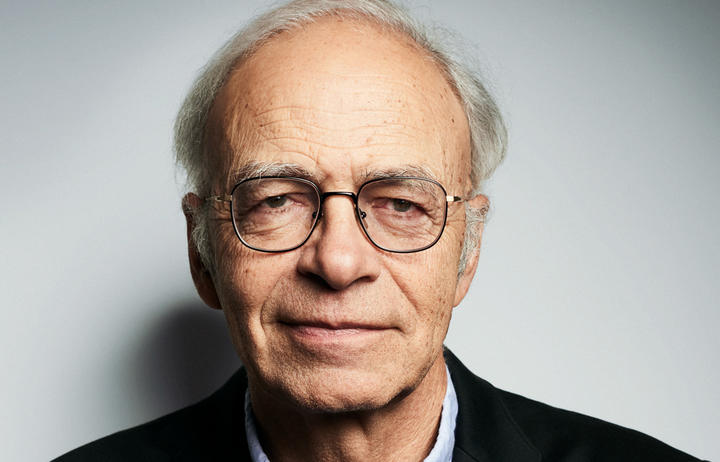 Singer wrote a book called Animal Liberation back in 1975 and is also a key figure in the development of effective altruism, meaning that people should try to reduce suffering in the most effective manner possible -  he's a proponent of utilitarianism, the greatest good for the greatest number.

Professor Singer was coming to New Zealand to promote his book on charitable giving and the alleviation of poverty. He donates 40 percent of his income to charity.

He told Kim Hill he finds it bizarre that he should be accused of supporting an idea associated with Nazism.

“My parents came to Australia as Jewish refugees from the Nazis, and sadly my grandparents did not leave in time and three of them were murdered by the Nazis, only one survived.

“So, I’m very far from giving any support at all to those horrendous ideas.

“The difference though is that I'm suggesting that parents should have the ability to make decisions that they judge to be in the best interest of their child and their family.”

Prof Singer says the ideas he put forward in an article Euthanasia: Emerging from Hitler's Shadow draw a distinct moral and philosophical line between his ideas and that of the Nazis.

He says his ideas on euthanasia are tied to quality of life, where a life may be deemed not worth living, rather than the Nazi ideology of a life not worthy to be lived.

However, if Prof Singer believes that happiness, enjoyment and the absence of suffering are the most important rational considerations for whether there is a decent quality life, how does he view children born with Down Syndrome, many of whom often have very happy lives? He says this depends on the circumstances.

“There are cultures in which people with Down Syndrome are regarded much more negatively than we regard them and where their future might be quite grim.

“If the parents themselves don't feel that they can love and rear such a child, then that's something that one might consider.”

Parents often make such decisions before a child is born, he says.

“And the overwhelming majority of women who have a positive result for that test do terminate the pregnancy.

He says he sees no sharp distinction between terminating a life before or just after birth.

“So, to that extent, I could think that if somebody was determined not to have a child with Down Syndrome and would have terminated that pregnancy had they had the test. And if they want to make that same decision immediately after birth, and if there's no family willing and keen to bring up their child, to adopt their child and give that child a good life, it doesn't seem to me very far from something that we pretty routinely accept - that is the termination of Down Syndrome foetuses during pregnancy.”

Prof Singer does not retreat from his views on euthanasia but nevertheless is wary of discussing them, he tells Kim Hill.

“The whole reason we're having this discussion is because some New Zealanders protested against my coming to New Zealand and the venue cancelled it.

“I was not going to talk about disability in New Zealand. So, I was not raising this topic. These are issues that I wrote about 30 years ago. And I haven't really spoken very much about them recently, or over the last 20 or 30 years, except when people protest, and I defend the views, which I still think have some sound basis.”

His interests now lie more in the areas of poverty alleviation and climate change inaction, he says, and he has received an offer to speak about these topics at a different venue in Auckland, he says.

“We've already had three offers of alternative venues in Auckland. So, I will be speaking about effective altruism in Auckland and I hope people will come along and listen to what I say on that topic.”