Actor Nathaniel Lees on The Legend of Baron To'a

The Legend of Baron To'a is a new action-comedy film described as "The Karate Kid meets South Auckland".

He talks to Kim Hill about how The Legend of Baron To'a blends violence and humour. 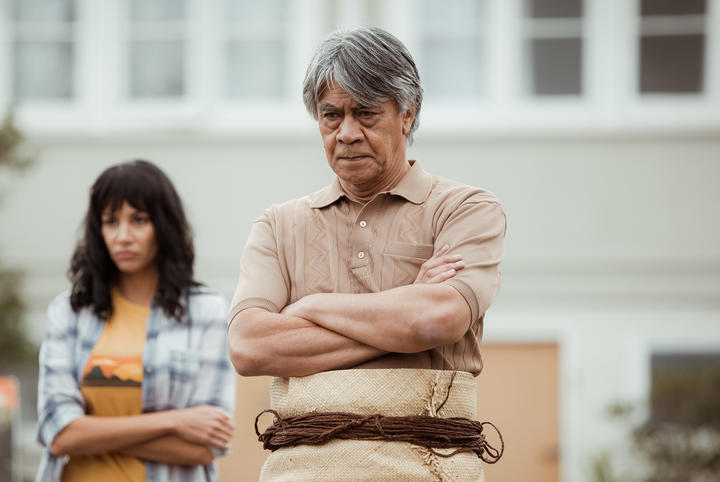 The Legend of Baron To'a is at its heart about family, he tells Kim Hill.

"Everything I've done, every story I've told, is about relationships with your family, your whānau, your ainga. And the location and dislocation of that situation leads to all kinds of fun and games, really … and sometimes it's not fun and games."

Lees parents were Samoan and he grew up in Ponsonby when most Pākehā and palagi were living in the suburbs, he says.

At that time, there was a familial feel amongst Pasifika in that area, he says.

'The middle of Auckland – Ponsonby, Westmere, Saint Mary's Bay – were full of Māori, Tongan, Tokelauan, Niuean, Samoan, so that community strengthened from there.'

There was also gang violence back then and people used humour as protection, Lees says.

He doesn't believe that The Legend of Baron To'a promotes violence in any way.

"What we see at the moment has always been there. If you actually took the time to look, you can see for yourself. If you grew up with it, you knew it already. This isn't about sugar-coating it. What goes through the film – there's a kind of humour about it, but underlying it is the thread [of familial connection] and that thread is always there.

"For people of my generation who grew up through that time, it was absolutely survival mode. [It was essential to] to find that line between [protecting yourself from] the danger and treating it in a way that you were able to cope with it.

"These people that I grew up with, that I went through it with, have become lifelong friends … we went through something. Now we're doing different things but we have in our hearts that familial connection. That danger and humour and what it did to us brought us together."

The Legend of Baron To'a marks the first time Lees has worked with his friend Jay Laga'aia who he first met while performing theatre at schools in South Auckland:

Later on, Laga'aia told Lees that that was the first time he'd seen a brown person on stage and knew immediately he wanted to act himself.