Sámi on screen - from cultural appropriation to consultation

After concerns over the first Frozen film’s Sámi-inspired elements, the filmmakers have been working with Ánne Laila Utsi to ensure there’s no cultural appropriation. 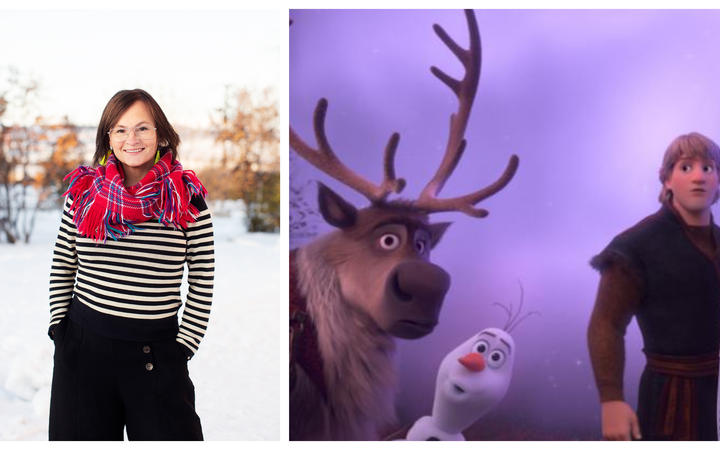 Sámi are an indigenous people of northern Europe with a population of about 100,000 spread across Norway, Sweden and Finland into Northern Russia.

Utsi says the Sámi communities were actually happy with the opening film’s theme which was done in collaboration with one of the biggest names, Frode Fjellheim. But it was one of the character’s clothing, Kristoff, that raised eyebrows.

“We just saw that it was inspired by Sámi culture with how it looked, and the shoes, and the reindeer especially ... [It] may be not the way we would have done it,” Utsi told Saturday Morning.

Reindeer also carry a special meaning for Sámi people, of whom a lot were herders, she says.

“Reindeers really gave us everything – it gave us food, shelter, clothes, transportation. You can still say today it’s a really important carrier of our culture and especially our language, because a lot of our words and language is connected to the reindeer, connected to the nature, connected to the snow and the weather.”

Utsi was one of six members of a group called Verddet that the Disney film's makers and animators consulted with. And the result is something they’re proud of, she says.

“It’s somehow groundbreaking in the indigenous film world if you say so because you have agreement. It’s not just someone coming from the outside who is taking our story and doing whatever they want with it, but it’s a collaboration, which is benefiting not just one part but also our people.

“[The fact] that they want to do it in a respectful and sensitive way, I think it’s something beautiful and maybe that represents some kind of change which will be nice.”

From a film-making background herself, Utsi has been in New Zealand as the first filmmaker in residence at the Māoriland and Filmmakers Residency in Ōtaki.

As managing director of International Sámi Film Institute, she says she aims to support and strengthen other Sámi filmmakers to tell their own stories, and in their own language too.

“It’s not the biggest film industry in the world but it’s a powerful one. We have a new generation of Sámi filmmakers who are travelling the world and winning awards in the big festivals – one of our young directors is competing in the Sundance Film Festival.

“For indigenous peoples, in light of our history like loss of our language and culture, it is really crucial that we are visible in the modern digital world, [and so] that our children can recognise their language and identity in that space.”

It is a challenge though because the 10 Sámi languages, similarly to other indigenous people, were prohibited in schools and public life for many years. Utsi recalls the “life-changing moment” upon hearing a Sámi language in a cinema when she was a teenager.

“I think this is the magic of cinema and film that you can tell both the ancient stories, the past, but also the present and looking to the future, you have these beautiful story-telling traditions we can build on.”

Although times have changed, she says she inherits her ancestors’ struggles and film is about conveying the presence of people who’ve been suppressed for so long.

“Films for indigenous people is about empowerment, it’s about survival, it’s about continuing our traditions, our culture, our language, it’s about being visible because we have been invisible for a long time. If that continues for too long, you become invisible in the end for everybody else, and in the end for yourself [too].”

She says she resonates with the struggles Māori face in filmmaking because of common history and livelihoods among indigenous people.

“It’s really empowering to talk together and think about the indigenous stories in a global context because the world is becoming more and more global and connected, through streaming, through festivals and travelling.”

But there is a shift in the tides, with the growing popularity of directors like Taika Watiti and stories like Disney’s Moana taking the limelight.

“There was someone [in Los Angeles], one of my colleagues, who said that Taika Waititi is now one of the hottest directors in Hollywood, everybody wants to work with him,” Utsi says.

“And he has said that Hollywood is running out of ides so this is our time, so maybe both the industry itself is looking for other kinds of stories and the audiences are also reachable, thinking about all the streaming and opportunities that are there.”

The expansion means indigenous filmmakers now are more likely to have opportunities to launch into the mainstream field as well as be able to focus on their individual work, she says.

“We have also here other Māori and Sámi and indigenous filmmakers who want to tell their own stories and want stay home and do it that way, and these films can also travel and that’s the beauty of film – it’s a universal language.”