Stepping into a witness box to give evidence in court can be daunting and stressful, especially for young and vulnerable people.

In several US states and in Canada dogs are being used as support animals in an attempt to reduce the stress involved. 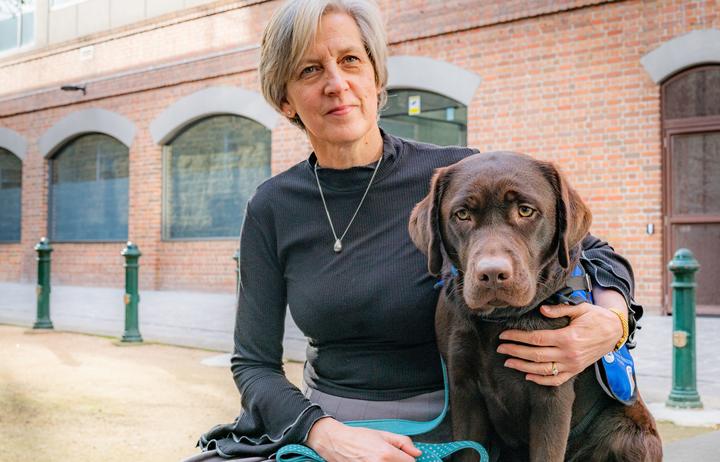 Julie Morrison is pioneering their use in Australia where she works at the Victoria Office of Public Prosecutions. Awarded a Churchill Fellowship to investigate the use of court dogs overseas, Kim Hill asks about her experiences and her recommendations for their use closer to home.

She says going to court is one of the most stressful things that someone can go through.

"So much so that many people disengage totally from the process. Others become so debilitated from the traumatic process that they have long term effects.

"The role of the dog is to help them through that by providing a reduction in stress levels and trauma levels so they can actually tell their stories a little bit more easily."

Morrison says the dogs will sit with the person while they’re waiting, before they give evidence, and then accompany them into remote witness rooms.

"The role of the dog is really quite simple. They lie beside the person really close, and I encourage the dog to have physical contact with the person's feet or next to their leg. The victim or witness will hold the dog's lead, because that’s a very important physical connection to the dog. We encourage people to have a bit of a look at the dog if they’re feeling perhaps a bit stressed, or to reach down and pat the dog.

"We find that this is enough to help ground them again, to take them out of that traumatic state and be able to answer questions."

Morrison says remote rooms were an ideal way to start the programme, but she’s keen on expanding it to having dogs available in court.

"My goal has always been to expand the programme so we are getting support to whoever wants it. I’m very excited to say we have been into the courtroom on five occasions for a number of plea hearings and sentencing hearings."

Just last week, a dog was present on the witness stand in court for the first time in a jury trial.

"It’s the first time ever its happened in Australia so that was a landmark day and very exciting for us."

The biggest objection to having dogs present for witnesses giving evidence is that people love dogs and the presence of a dog could sway a jury to be more sympathetic to a witness. Morrison says that while the jury is made aware the dog is there, it is completely out of sight for the jury.

The other way of getting around the dog love is to not have the jury present when the dog walks in.

There is scientific evidence backing the how the presence of dogs benefit humans.

"Studies have shown that when you’re in the presence of a dog, and particularly a sleeping, restful dog, there’s actually an increase in the hormone oxytocin in your system. Oxytocin has the effect of reducing the levels of cortisol which is the hormone that increases our heart rate and blood pressure and gives us all those feelings of stress."

She says the studies have shown you don’t even need to be touching a dog, just being in its presence or looking at it is enough to increase oxytocin levels.

"Those of us who are dog lovers have known for a long, long time why we like to have a dog sleeping at our feet or on our lap."

The dogs in question, therefore, need to be very chill. Morrison says they are bred specifically for their restful manner and low energy and highly trained in their support roles.

"If there’s a noise, our dog will barely even lift her head."