David Suchet is best known for his portrayal of Agatha Christie's Hercule Poirot playing the diminutive Belgian detective in all 74 Poirot episodes on television over a period of 25 years.

But there is more than Poirot to his 50-year career. He has been a stalwart of the Royal Shakespeare Company since the early 1970s, he has been directed by Pinter on the stage, won an Emmy playing Robert Maxwell in a TV portrayal and is currently playing lead in Arthur Miller's play The Price on the West End. 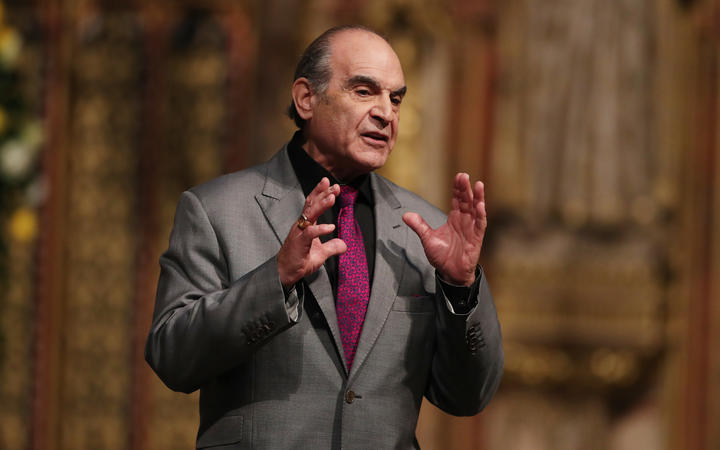 His career started in repertory theatre in the UK where he soon made his mark playing heavies, he told Kim Hill his stocky physique and deep voice were an early advantage.

“I was playing middle-aged parts from the get go in a way, I never played young people because in Repertory Theatre you do a play every 10 days, a play every two weeks, and I was always playing the heavy characters, actually that stood me in very good stead for my career because I was playing big leading heavy roles in my early 20s and I became the youngest professional Shylock in the British professional theatre.”

And it was a growing career in theatre that occupied him for the next ten years. It was as an itinerant actor that he met his wife of 50 years, Shelia Ferris, and they came up with an unusual way of traversing the UK.

“Sheila and I decided that we'd had enough of theatre digs, at that time, I was in the Royal Shakespeare Company I joined that company in 1973.

“We were so sick of theatre digs and having to put money in machines to get electricity or gas that we decided to have built a narrow boat.”

It cost him the princely sum of 4000 pounds to build he says, but it served as their home and their means of transport.

“The canal system in England is extraordinary, it goes through all the industrial towns and cities, that in fact there's more canal miles in Birmingham, than there are in the whole of Venice.

“And we used to literally go from rep-to-rep where we were working …and we would make this our home and carry it with us. And it was very romantic.”

In the late 1980s he was offered the role of Hercule Poirot and he says Agatha Christie’s daughter, Rosalind Hicks, had very particular advice about how the Belgian detective should be played. 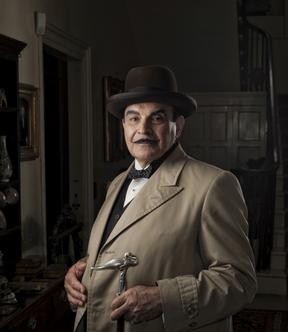 “I was taken out by Rosalind Hicks and her husband for lunch, when I was cast as Poirot and both of them grilled me over lunch about the way not to play Poirot as far as the Agatha Christie estate was concerned, and why they wanted me to play it.

“I was looked at by Rosalind Hicks … and she said quite severely we do not want you to play Hercule Poirot in a comedic way at all. We will allow your audience to smile with him, but never laugh at him.”

Subsequently Suchet became something of a guardian to Christie’s creation, he says.

Suchet has played many villains, and he says no matter who the character he must find some point of empathy with them.

“When I was playing a terrorist in Executive Decision on an airplane, wanting the airplane to blow up, I had to find the justification for himself, that particular character, to do that from his religious perspective and felt that he was doing honour to God by doing it. I have to find those reasons. Otherwise you can't play them.”

He found the key to playing Iago in Othello when he rewrote the play without Shakespeare’s malevolent character.

“Iago is the biggest mass murderer in the whole of Shakespeare. How do you play that villain? Many intellectual writers will say with motiveless malignity. You can't play that, you have to play a psychopath, and he wouldn't know he was a psychopath,” Suchet says.

“I wrote an essay about the play, I wrote the play again, without Iago in it and I realised that by taking Iago out of the play no-one was jealous.”

“Indeed, everybody that Iago touches in that play catches the disease of jealousy.”

This approach serves him well with every character he plays, he says.

“I take them out of the play to see what is missing, rather than say, ‘how do I play this role?’ I say, ‘why was he written?’

“And I can only do that by removing and it's like cooking really, you say what's missing? What do we need here? A bit of spice, a bit of salt and pepper etc, etc.

“So that's what I now do with my plays, I take them out and that way I know I'm serving my writer as well.”

This kind of immersion in character comes with risks, he says.

“I was playing Timon in Timon of Athens when somebody, a dear friend of mine who’s a psychologist, came backstage and said I was still in character.

“And he gave me a way of getting out of character so that I wouldn't bring characters out of the theatre with me into my real life, and he made me repeat in front of the mirror lots of personal details about myself, including silly things like telephone numbers and addresses and my children's date of birth, to bring me out of the character and back to myself.”

David Suchet is coming to Christchurch, Wellington and Auckland early next year with his live stage show Poirot And More: a Retrospective.