Chris Christie on Trump, Cohen, and his new book

Despite having been lied to and betrayed by Donald Trump, his former adviser Chris Christie says he’s still a supporter of the President and believes he remains a better choice than Hillary Clinton. 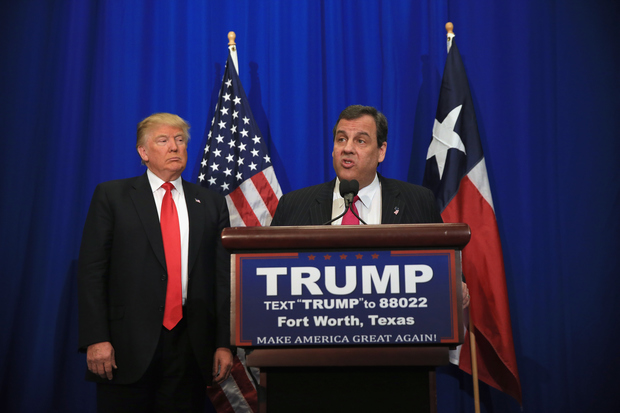 A file photo shows Donald Trump, right, and Chris Christie during a break in the Republican Presidential Candidates' Debate in New Hampshire on 6 February. Photo: AFP

After dropping out of the 2016 presidential race, Chris Christie stunned the political world by becoming the first major official to endorse Trump. A friend of Trump's for 15 years, the two-term New Jersey governor quickly became one of his most trusted advisers.

Tasked with running Trump's transition team, Christie was nearly named his running mate. But within days of Trump's victory over Hillary Clinton, Christie was in for his own surprise: He was booted out.

In a new book, Let Me Finish, Christie gives his view on what he says "really happened" on the 2016 campaign trail and inside Trump Tower, including how he came to earn the enduring enmity of Donald Trump's son-in- law, Jared Kushner. He told Kim Hill he’s still unsure why he was sacked.

“We had some conversations about it and there were always different excuses given but none that I found all that credible.”

Christie was offered other jobs and says he believes Trump wanted him to take one, but “I made it really clear to him those were jobs I was just not interested in.”

He says he’s known Trump as a friend for 17 years and, in the book, wanted to give insight into the various parts of his personality. He says he doesn’t blame Trump for his betrayal, but instead points the finger at the President’s son-in-law.

“That’s the risk of having family take jobs in the administration. It’s very tough to push back on and ultimately if you need to fire people you need to have Thanksgiving with. I think Jared being married to his daughter, who is a very important person in his life, leaves Jared with a great advantage in terms of his ability to be able to work the President against the things he wants to get."

And yet, it wasn’t the first time Trump had blindsided his friend. During the Republican primaries, Trump had taken aim at Christie over Bridgegate - the scandal in which New Jersey officials in his staff colluded to create traffic jams by shutting down access to Fort Lee through George Washington Bridge. Christie was ultimately exonerated in investigations.

He says he and Trump had discussed the matter prior to that debate and Trump told him he knew he didn’t do anything wrong.

Christie writes in the book: “You don’t do that to anyone, let alone a friend of long standing.”

He tells Kim Hill he called Trump after he made the comments and the President apologised to him and said he wouldn’t do it again.

“It was a completely outrageous thing to do and that’s why I confronted him on it. Usually in political campaigns when people are hurtling charges back and forth you don’t usually pick up the phone and call them and say, 'hey that’s not fair, that’s not right, that’s not true'. In this instance, it was so outrageous, and given our friendship, we had a conversation right away and I made it clear to him that I was going to go right back after him if that’s what he was looking for and that what he was doing was untrue. Ultimately, a day later, he called and he apologised.”

Christie says he still regards Trump as a friend despite the President leading him to think he was going to be Vice President even after he had picked Mike Pence.

“Everybody in politics at some time or another says some things that maybe aren’t completely true.”

“No one has an entitlement to Vice Presidency. One of the President’s weaknesses is he has a very difficult time delivering bad news and I think that’s a flaw and a fault but it’s something that I know very well about him.”

However, Christie insists that if he had remained head of the transition team, things would have been smoother and there would be no Mike Flynn or Tom Price

“There would be a bunch of folks in the Cabinet that would’ve been different, and I think I would’ve presented the President with much better choices that he was ultimately presented with.

“The Cabinet is significantly better now than it was two years ago. In addition there would have been more organisation to it. It was a very haphazard process that led him to get off to a really bad start.”

Christie says the controversial Muslim travel ban was sloppy and illegal and the Obamacare repeal was ham-handed. He says these would have been handled differently if they had followed the 30-volume transition plan Christie’s team had written up.

Yet Christie says he doesn’t regret supporting Trump for President because he “didn’t want Hillary Clinton to be President.”

It was one of his biggest reasons for running in the first place. He says he believes her honesty and judgement are suspect.

Even the Access Hollywood tapes - in which Trump bragged about non consensual touching and kissing - didn’t sway Christie and it again comes down to his distaste for Clinton.

“Look, we had two choices: Donald Trump or Hillary Clinton. What are you supposed to do? Stay home and not vote?

“It’s not like we’re dealing with someone who’s completely pure on the other side either. That was the choice we had for President and I believed then and I believe now that he was still the better choice.”

Christie was encouraged to run for President in 2011 against Obama but decided he wasn’t ready. To encourage him, one donor set up a meeting where Christie entered a room packed with about 50 billionaires who were potential supporters. But the influence of money in politics doesn’t worry Christie.

“It’s just a reality of the way the game is played in the United States. It’s significantly different in other places, but we’ve decided that based on our first amendment right to free speech that people should be able to spend as much as they want to spend and can raise [money]. So, no, I don’t worry about it because, having raised money a lot of times, all I can tell is that the most those donors got was the opportunity to have access to me and make their arguments.”

Today, Christie is practising law and sitting on three different corporate boards. He also does commentary for ABC News. But there will be more politics for Christie in future, he says that’s why the title of the book is Let Me Finish. He says his friend got in the way last time.

Christie won’t run against Trump in 2020 but says he will have a “tough race on his hands” if a star emerges from the Democrat candidates.

Christie says people should not pay heed to Trump’s former lawyer and fixer Michael Cohen who told Congress there would not be a peaceful transition if Trump loses in 2020.

“Michael Cohen is a dope. The President’s biggest mistake was that he had somebody like Michael Cohen around him for ten years. That was a big mistake and I’m sure he’s rueing the day he did that now.”

Trump also faces threats from Robert Mueller’s ongoing investigation and where Trump is combative and resentful toward the Special Counsel, Christie holds him in high regard.

“He’s a top notch prosecutor and was a great head of the FBI,” he says.

“The thing about politics is: things can change in a heartbeat and you always have to be aware and ready to react to whatever the new circumstances are.”

Former director of the FBI James Comey, on the other hand, got what was coming to him. Christie says he would have sacked him much earlier than Trump did.

“He acted completely inappropriately towards Hillary Clinton in the summer of 2016. He should have either charged her, or shut up. He shouldn’t have gone out there and said we don’t have enough evidence to charge her but she was irresponsible, she was reckless etc etc. That’s not what folks at the Department of Justice are supposed to do. Either you charge, or you shut up – you don’t impute someone’s reputation. For that alone, Mr Comey deserved to be fired."