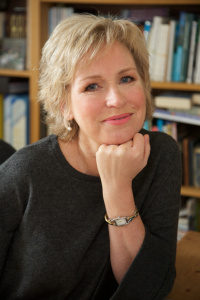 Sally Magnusson is a Scottish journalist, broadcaster and writer. She grew up in Glasgow, the eldest daughter of the Icelandic journalist and broadcaster Magnus Magnusson and the Scottish newspaper journalist Mamie Baird. She is the presenter of Reporting Scotland for BBC Scotland as well as Tracing Your Roots on BBC Radio 4 and is one of the main presenters of the long-running religious television programme Songs of Praise. After observing the effect of music on her mother's dementia, she founded Playlist for Life in 2013. Her first adult novel, The Sealwoman's Gift, is set in Iceland and Algiers in the 17th century and is a historical story of slavery, based in fact.