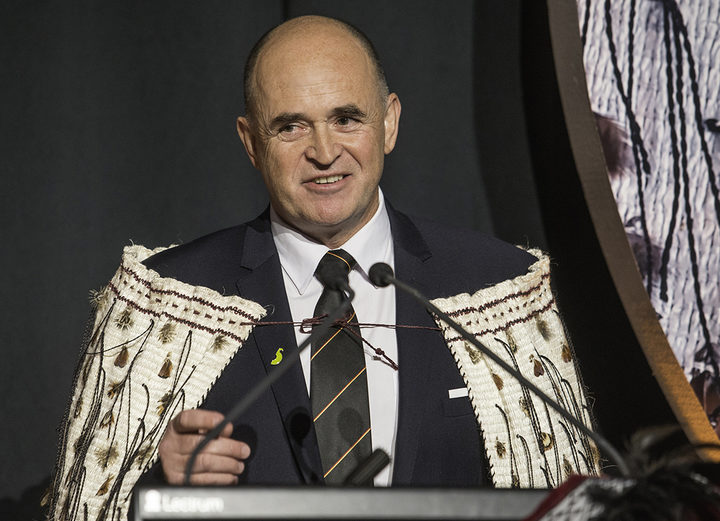 Te Taka Keegan was responsible for putting the macron on to the Microsoft keyboard and helped develop the te reo version of Google Translate.

Keegan (who is of Waikato-Maniapoto, Ngati Porou and Ngati Whakaaue descent) is a senior lecturer in computer science at the University of Waikato.

He talks to Kim Hill about his love of te reo Māori, his teaching philosophy and the lunchroom at Google.

Keegan grew up on a dairy farm in Taranaki with a Pakeha father and Māori mother.

His mother didn’t speak te reo herself so as a child he didn't either.

As a young man, Keegan went to work as a computer hardware engineer in Australia for a couple of years.

“I’ve got a real knack with computers. I walk in the room and they all start working.”

Then he was offered a promotion which would have meant settling there – and realised that wasn't what he wanted.

“There was always that call to come home and sit down and learn some things about myself, about my family, my language, my culture, that I hadn’t yet had a chance to learn.”

He returned to study a BA in Māori from Waikato University, taught entirely in te reo.

The first few months were really hard, he says.

“I felt like I was on a different planet because I didn’t have enough language to converse with everybody.”

But one morning five months into the first year he woke up and realised he’d had a dream in which everyone was speaking Māori.

A little later he went to a powhiri at a marae and “pretty much understood” everything that was said.

“I’m going ‘Okay, now I can start to run with it. That’s a beautiful feeling.”

Becoming fluent in another language can open your mind and give you the opportunity to hold two separate perspectives at once, he says.

At the time Keegan had an interest in sailing and went on to do his masters in traditional Māori navigation.

“I needed a kaupapa, it would be great to go sailing, why don’t I do my masters on traditional navigation? So I did. I got to go on that voyage, I got to write about it… It was an opportunity to do some sailing.”

The sailing life was tempting for a while, but New Zealand already had heaps of good sailors, he says.

“You just start doing things because you know no-one else is in a position to do them yet. And that’s certainly what happened with me.”

Keegan worked on Google's translator tool kit for te reo for six months from their global HQ in California.

Tech people can be quite narrowly focused on their coding and not converse much in the office, but when they break to eat ‘awesome food’ together the conversation is lively and productive, he says.

When Keegan arrived at Google, the Translate feature was only available for major languages, he says.

“My challenge to them was ‘OK, things work fine for your big languages. What about the small languages? What about languages like te reo Māori? When we don’t have so many speakers, do your tools still work? Their response was ‘We don’t know’. So my response was ‘Let’s find out’.”

Google Translate for te reo – English (and vice versa) is still a work in progress. It can help give an idea of whats being said, but doesn’t yet have enough data to be relied on as a complete translation, he says.

Keegan is quietly proud that most computers sold since 2000 have the ability to type a macron character, thanks to his work with Microsoft.

The macron, which indicates a lengthened vowel sound, is essential for pronunciation and meaning, he says.

“I pretty much did that. I walk around and I go ‘Yeah, that was me who allowed them to do that’.

He’s also proud of his PhD work on the digital Māori Niupepa Collection – an archive of thousands of pages of Māori periodicals published between 1842 and 1932.

“There’s something about that language in those newspapers, it’s clear, it’s beautiful. Maybe the perspective of the writer has been less colonised or less influenced, so the way they’re writing things down is from a slightly different perspective. There’s some beautiful texts in there.”

Keegan has now taught computer science for 20 years, and Māori tikanga is at the heart of his three-part teaching philosophy.

The first part involves lifting students' spirits by using humour and playing music at the start of class as they arrive.

“If you can have students in your class that are feeling good, feeling comfortable, feeling happy, then they will learn better.”

The second part is finding ways to spark up the class, by using real-life examples or sometimes with a yoyo – “It’s just a tool to change things around, to spark things up a little bit.”

The final part is having empathy for students having problems or difficulties.

“Think about them, work with them, help them.