Tame Iti is mostly associated with Tuhoe, but also has links with the Waikato tribes of Ngati Wairere and Ngati Haua, and with Te Arawa.

This week he gave Leadership NZ's 2016 Bishop Sir Paul Reeves Memorial Lecture, 'From the Raindrop to the River to the Sea', discussing the concept of mana. 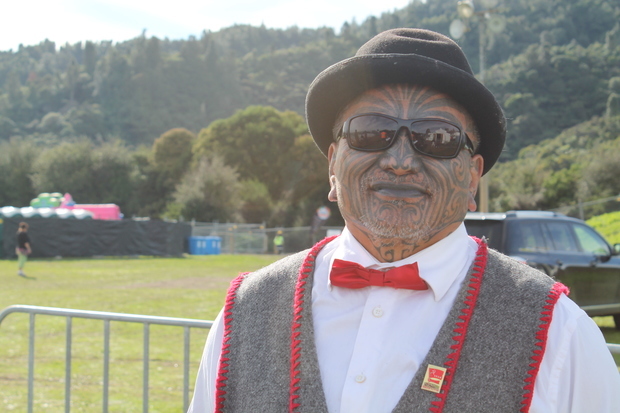 Tame Iti was raised by his great granduncle and aunt, Hukarere and Te Peku Purewa, in the custom known as whāngai and he says his early life and conversations with his people laid the foundations for his life as an activist.

"They didn't use the term confiscation, they said stolen property. I was only young then and thought how can it you steal somebody's land? But the land's still there That conversation stuck in the back of my head for a hell of a long time.

"I had really mixed feelings as a young Tuhoe boy raised during that period of time the 50s and 60s. You hear very negative things about not just being Tuhoe, but also being Maori, and I'm thinking maybe they're right, maybe I'm dumb, maybe I smell, so you go through that then you reach a point and you go no, I'm not dumb, no I don't smell that was the beginning for me going through that journey."

He says he encountered racism in Whakatane and later when he moved to take up an apprenticeship in Christchurch.

"Whakatane people are products of the early colonisation, they walked with this kind of superiority. You hear it [racism] sometimes, you can feel it. Heading down to Christchurch even more so .. racism I'd never experienced, the way they'd look at us in those first 2 to 3 years; living in Christchurch was a totally different experience."

He was part of the Maori trade training scheme in the 1970s which took him to Christchurch.

"I was one of the many hundreds of young Maori men and women that were sent away from their homes. I took up the opportunity to be an interior decorator I didn't know what that was about - they gave you the options of forestry work, working on the farm, mechanics and carpentry and I chose interior decorating."

Being a te reo Maori speaker was a struggle in his early life, he says.

"We were brought up you don't speak any other language, school was pretty hard core it didn't hit me until I was around 7 or 8 when the principal of the school made the announcement at the assembly line: 'From today on I will not allow you to speak Maori on my school grounds.'

"We challenged him, we had a go at the bugger! We just carried on of course. We had to test out his mana.

As a young man he started to learn about social struggles in other parts of the world and that informed his emerging radicalism, he says.

"I went on to learn about all the other struggles: in South Africa, in Vietnam. I became a Marxist-Leninist for 16 years as a member of the New Zealand Communist Party which gave me another dimension of the consciousness, but I returned to where I should be, where I belong. That's to engage in the resistance and to shape the form of our new future."

The controversy of him shooting the flag was all about political theatre, Tame Iti says.

"How do you tell your story? How do you bring a hundred years of hatred of anger to that point? So it's not an academic thing, this is a real thing for us,"

His conviction for possession firearms and molotov cocktails was based on a falsehood, he says.

"That is information created by the prosecutor and the Crown. I went to jail for something not even real. We had no plan to create chose in our community, why would I want to do that? So they made it up. It's not real but yet I got convicted for that, I got two and a half years it's crap.

"When the judge made the decision it took me about three days to get over it. I was really angry. Once you're locked up you have no rights you have no voice, so you're like a little dog locked up in the pen. There's thousands of young Maori men and women in that situation right at this very moment, you have no mana. It's degrading, dehumanising. When they search you, even though I was not convicted for drugs, yet they can pull your pants down they can look up there to see what you've got up there .. every time someone comes and visits you or if you work out on the farm.

He says he was part of a Maori focus unit in prison and became involved in mentoring young men there and other positives came out of his imprisonment.

"The good thing about being locked up, it elevates the Tuhoe claim, to validate what we always say the Pakeha system's no good."

He says now Te Urewera has been returned to Tuhoe the government must play its part cleaning it up.

"The govenment's got to clean their mess up. Te Urewera is in a sad sate. Rats, possums, the trees are dying, we've got to get the bird life back. The good thing is Tuhoe now runs it, we manage the Te Urewera. We are a small group of people who maintain the mana and maintain our nation."

He says he sees a good future for Tuhoe people.

"We are in a very exciting time, we had 150 years of codependency and now you're the chief. What does that look like? Those are the things were working on today and I'm really excited, we are all excited.

"They'll be a greater movement of Tuhoe returning home, we are creating those opportunities and potential we already have the goldmine .... you've got the water, the land, you've got the space. There seems to be a feeling our people to want to come home. I think the future for Tuhoe is enormous, for Tuhoe around the world."

And how does he see himself today?