As front man of Cold Chisel, and a later a solo artist, Scottish-born Australian gravel-voiced rock singer Jimmy Barnes is one of the most popular and best-selling Australian artists of all time. 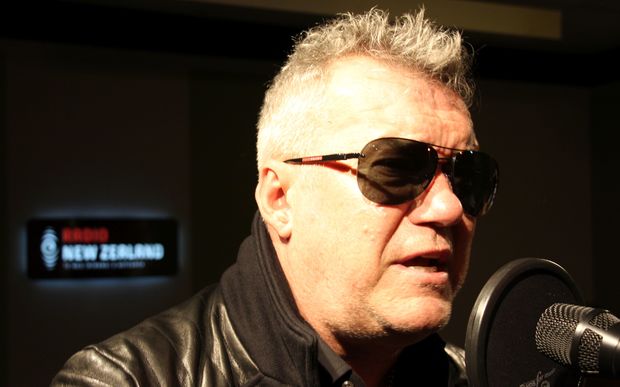 But his early years were tough, and he tells Kim Hill he has lived with the damage he suffered as a boy throughout his adult life.

The first volume of his two-part autobiography Working Class Boy tells the story of his tortuous childhood, and is the result of years of therapy dealing with alcoholism drug dependence and guilt.

The book describes a childhood blighted by alcohol and violence in Glasgow which continued in South Australia when the family emigrated there in 1962.

Barnes came to Australia with his family from Glasgow when he was five, he says he has spent his adult life running from his childhood.

The book uncovered many old wounds, he says.

He remembers a dispute in Glasgow where his sister had bitten another child.

“To settle it my mum and her mum had a fist fight, and my mum knocked her out.”

Despite everything he loved his parents and says when sober his father was a soft spoken, charming man.

But when they were together and drunk, violence followed.

“I’ve seen my mum hit my dad with everything from lumps of wood to stiletto heels on the back of the head, they were just at each other.”

His parents never hit the children but the house was never a safe place.

“My sister would take us and hide us in the cupboard and cover us with blankets and coats or anything to smother out the noise so we couldn’t hear them fighting.”

Barnes’ father worked hard but there was never any money.

“Thursday night when it was pay day he just disappeared and he would turn up Sunday night -smelling of booze and women and he’d gambled all the money away - with his tail between his legs asking for forgiveness.

“He was a good bloke but he just couldn’t cope, he was in fits of depression.”

His home was so dangerous he would sleep in a nearby paddock in the dark.

And the move to Australia didn’t improve things.

“All those problems came with them, my dad just kept drinking, they kept fighting, womanising, gambling.

For his mother the only difference was she was alone with no support network.

“She was in Australia alone in the midst of her own hell, so things went from bad to worse.”

Finally his mother had enough and left the chaos of her life leaving the children behind. The children were left to fend for themselves, stealing for food and clothes with the older sister taking on the role of mother.

Finally, after two years, his mother returned with a new partner, Reg Barnes.

“Reg Barnes came into our life that day and we never went back to our dad, it was just incredible Reg was like the saviour.”

But by then his troubled childhood had taken its toll, he says.

Jimmy Barnes will be in New Zealand in February 2017 visiting nine venues with his show, Jimmy Barnes - Working Class Boy: An Evening of Stories + Songs.