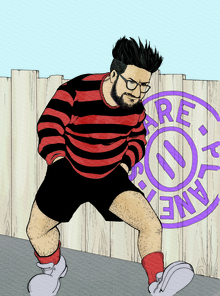 Richard Fairgray has been creating and publishing comics since he was seven years old.

He is Editor in Chief of Square Planet Comics, and is best known for his series Blastosaurus.

Fairgray says the series is "ninja turtles for grown ups".

"I also wanted to create this mutant crime fighter who lived in the real world, something that was a logical version of that."

He also writes and illustrates children’s picture books, including the Morgan series, and Gorillas In Our Midst (SkyPony Press).

Fairgray was a guest at the Armageddon Expo 2015 at the ASB Showgrounds, Auckland (23-25 October).

He talks to Kim Hill about his comics.