Dr Mark Goodwin leads the Bee Unit at Plant & Food Research, and has just been awarded a Royal Society New Zealand Science and Technology Medal for his work on honey bees and crop pollination practices.

Gaven Martin is Distinguished Professor in Pure Mathematics at Massey University and the founding director of the NZ Institute for Advanced Study, established two years ago at Massey's Albany campus. It aspires to be one of the world's leading centres for theoretical research and intellectual inquiry. Later this month, Gaven will travel to the University of Cincinnati in Ohio; the first academic from a New Zealand university to be invited to deliver the annual Taft Lectures.

Richard Stallman is a software freedom activist and developer. He is visiting New Zealand as a guest of the School of Information Management at Victoria University of Wellington for a range of engagements and events to help promote the use, dissemination and ideals of free software, and to deliver the keynote address, Copyright vs Community in the Age of Computer Networks, at the LIANZA (Library Information Association New Zealand Aotearoa) conference in Christchurch on 12 October.

There is a transcript of this interview.

Mark Amery is the director of Playmarket, New Zealand's playwrights' agency and playwright and play development organisation, and writes about art for the Dominion Post and the NZ Listener. He will discuss the exhibition of the work of Maori artists in public galleries, and how Maori artists successfully operate in Maori and Pakeha driven art worlds. 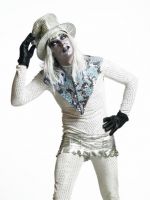 Ian Chapman, aka Dr Glam, is a musician, writer and academic. His 1970s cultural fetishism led to gainful employment when he joined the first-ever rock degree course in New Zealand at Otago University. His memoir of the era, Glory Days: from Gumboots to Platforms (HarperCollins, ISBN: 978-1-86950-728-2) includes reminisces from the likes of Marilyn Waring, Chris Knox, Dougal Stevenson and John Minto, and he will be participating in events in the South Island and Stewart Island during New Zealand Book Month.

New Zealand chef and food writer Peter Gordon has been dubbed the "father of fusion cuisine". He co-owns The Providores and Tapa Room in London, consults to Istanbul's Changa and Muzedechanga restaurants, and has a signature restaurant, Dine by Peter Gordon, and Bellota tapas bar in Auckland. His sixth book, featuring photography by Jean Cazals, is Peter Gordon: A Culinary Journey (Viking, ISBN: 978-0-67007-266-8), and he will conduct three luncheon events in Auckland, Wellington and Christchurch.

Marti Friedlander immigrated to New Zealand in 1958, and has had a long career as an exhibiting photographer, and collaborating on a number of books with authors such as Michael King, James McNeish and Dick Scott. Her life and work is examined in a new book, Marti Friedlander (Auckland University Press, ISBN: 978-1-86940-444-4), by Leonard Bell, Associate Professor of Art History at the University of Auckland. It will be available in bookstores from 9 October, and sample pages are available on the Auckland University Press website. Around 50 prints of her photographs have been curated by Leonard Bell for an exhibition, Looking Closely, at the Gus Fisher Gallery (9 October to 21 November), accompanied by a programme of public events.

Noah and the Whale: Love of an Orchestra
From the 2009 album: The First Days of Spring
(Mercury)
Played at around 8:30

The Voluntary Butler Scheme: Tabasco Sole
From the album: At Breakfast, Dinner, Tea
(Split Records)
Played at around 11:30

David Bowie: Ziggy Stardust
From the 1972 album: The Rise and Fall of Ziggy Stardust and the Spiders from Mars
(RCA Victor)
Played at around 10:50

Dr Glam & the Mysterons: Ghost Train
From their forthcoming yet-to-be-titled album
Played at around 10:58