Dr Stephen Zunes is a Professor of Politics and International Studies at the University of San Francisco. During the 1990s, he was chair of the board of Peaceworkers, an American NGO which supports non-violent movements and peacemakers in areas of conflict, when its primary projects were in Kosovo. Dr Zunes is a frequent visitor to conflict areas, and returned last week from a visit to Serbia.

Jody Williams won the Nobel Peace Prize in 1997 for her work in banning landmines. Since then she has gone on to form the Nobel Women's Initiative, and last year led a high level mission on Darfur, authoring a hard-hitting report to the United Nations' Human Rights Council calling for an end to the war in Darfur. In 2004 she was named by Forbes Magazine as one of the 100 most powerful women in the world. She is visiting New Zealand for the Conference on Cluster Munitions.

Canadian director Francois Girard is best known for his innovative 1993 film Thirty Two Short Films About Glenn Gould. His 1998 film The Red Violin won 22 Canadian film awards and an Academy Award for Best Original Soundtrack. Girard is also an accomplished stage director, and brings a double bill production from the Opera National de Lyon to the 2008 New Zealand International Arts Festival on 23, 25 and 26 February. The Seven Deadly Sins and The Lindbergh Flight / The Flight Over the Ocean features music by Kurt Weill set to texts by Bertolt Brecht, exploring different aspects of the American dream. Francois Girard also gives a free art talk at the Festival on Sunday 24 February.

Australian art collector and patron Dr Dick Quan has been called one Sydney's ten most influential art people. He is an AGNSW Contemporary Collection benefactor, former chair and VP of the Asia Australia Art Centre, and ambassador for MCA Sydney. His early support for art photography in the 1990s assisted the rise of artists Tracey Moffatt and Patricia Piccinini, and he is an enthusiastic supporter of new media art. Dr Quan is lending his edition of the three-channel video work, Last Riot, by the Russian contemporary artist collective AES+F (one of only three editions worldwide) for the exhibition AES+F: Last Riot at Wellington's City Gallery (to 16 June 2008).

Tony Rabbit is a production, set and lighting designer for theatre and cinema. He designed the Auckland Theatre Company production of Where We Once Belonged, adapted by Dave Armstrong from the novel by Sia Figiel for the 2008 New Zealand International Arts Festival. He is also an enthusiastic promoter of the Segway personal transporter (see below). 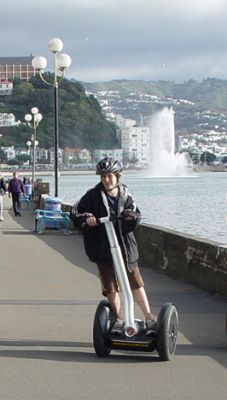 Linda Shaw recently set aside a long career in corporate management to commit fulltime to her environmental and conservation message of "mecology" for New Zealand over the coming two decades.

The Playing Favourites segment of the Saturday Morning programme is repeated at 4.06am on the Thursday morning following initial broadcast.

Artur Rubinstein: OP9 no 1 in B flat minor
From the album: The Chopin Collection: The Nocturnes
(RCA Red Seal)

Janet Roddick: Pirate Jenny
From the album: The Songs of Kurt Weill
(Braille)

Other music played on the programme

Eva Cassidy Fields of Gold
From the album: Songbird
(Hot)