GNS Science researchers are mapping where water flows underground across New Zealand, which will help with better management of groundwater resources. 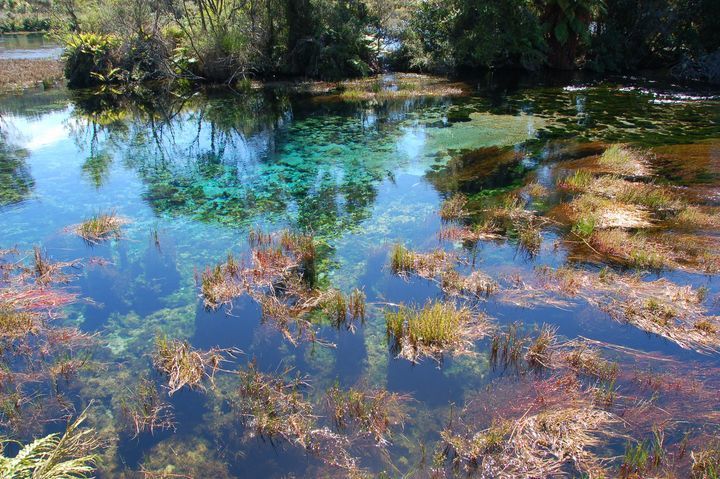 Te Whakaheke o Te Wai is a five-year project funded by MBIE’s Endeavour Fund to map where groundwater comes from and where it flows to.

“Groundwater is all of the water beneath the ground,” says GNS scientist Catherine Moore. “It’s also the source of base flow in rivers, so when river flows get low that’s basically groundwater.”

New Zealand’s groundwater resources include about 20 significant aquifers, which are places where the water flows through permeable rocks and can be easily extracted.

Canterbury and Hawke’s Bay are examples of places where aquifers created by large gravel alluvial plains supply significant amounts of water for urban use and rural irrigation.

How old is the water?

The age of the water is a vital clue in this mapping project.

Uwe Morgenstern says that he uses radioactive isotopes of hydrogen, such as tritium, to date the water.

“We are measuring isotopic signatures of water molecules. That can tell us where the water has been recharged and how long it took the water to flow through the aquifer,” says Uwe.

He compares the concentration of tritium in rain and groundwater to get a date for the age of the water.

Uwe says that most aquifers that are being used in New Zealand have water that is less than a hundred years old and it is more commonly 10-20 years old.

In Christchurch, however, the city’s water supply comes from deep aquifers and is thousands of years old.

Future problems that we have already created

Uwe says the age of groundwater can have large implications for its quality in the future.

He says that Lake Rotorua is a prime example of what groundwater experts call ‘the load to come.’

Since the 1970s, efforts have been underway to remediate growing levels of nutrient pollution from nitrate and phosphate runoff, but in that time water quality has continued to deteriorate.

Age measurements show that the water in streams and rivers in the catchment that feed the lake is between 50-100 years old.

“So the nitrate load we see going into the lake today is actually the load from 50 years ago,” says Uwe.

“So [what we see now] is just the tip of the iceberg and we will see more nitrates coming into the lake in future.” 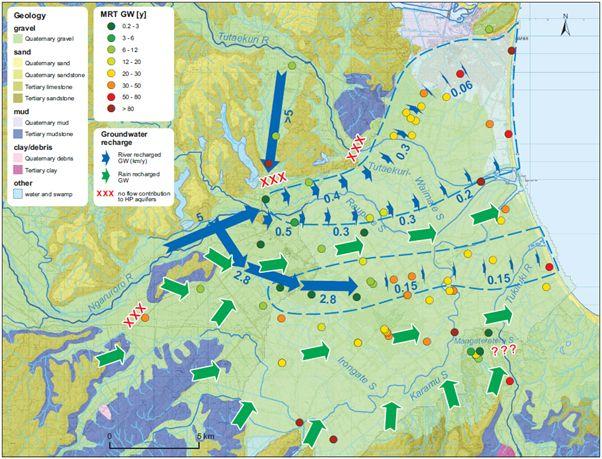 A map created by GNS showing where groundwater flows across the Heretaunga Plains. Photo: GNS Science

A complex groundwater map of the Heretaunga Plains

The team has already completed its detailed mapping of groundwater on the Heretaunga Plains.

In the north, the aquifer is river-fed, with water that moves rapidly at first but travels very slowly by the time it reaches the coast.

In the south of the plains, the groundwater is recharged from rain.

“It is a very complex situation,” says Uwe.

The oldest groundwater the team has identified on the Heretaunga Plains is 4000 years old at a depth of 250 metres, but most of the water being extracted from the aquifer for use is less than 10 years old.

Amber Aranui is a Te Papa researcher who whakapapas to the Heretaunga Plains and is bringing matauranga Maori or traditional knowledge to the project.

She says her interest is ensuring that “my iwi, my community have clean water to drink, and are able to interact with water as they did in the past.”

Amber and the rest of the team hope the maps and models produced from the project will help with the better management of groundwater in the future.

Listen to the full podcast to hear more about groundwater on the Heretaunga Plains, including detective work which identified how contaminated surface water quickly flowed into a groundwater bore, causing a major campylobacter outbreak in Havelock North in 2016. The water moved from a contaminated puddle in less than a day via a network of small channels known as open framework gravels.

The science of a water aquifer

Listen to this story on the Waiwhetu aquifer in Wellington to find out more about underground water.