The science of a water aquifer

A world-first operation to drill for freshwater under the sea has just begun in Wellington Harbour.

The idea is to find an alternative source of water for Wellington city, in the event that the existing water pipeline from the Hutt Valley is damaged in a large earthquake. 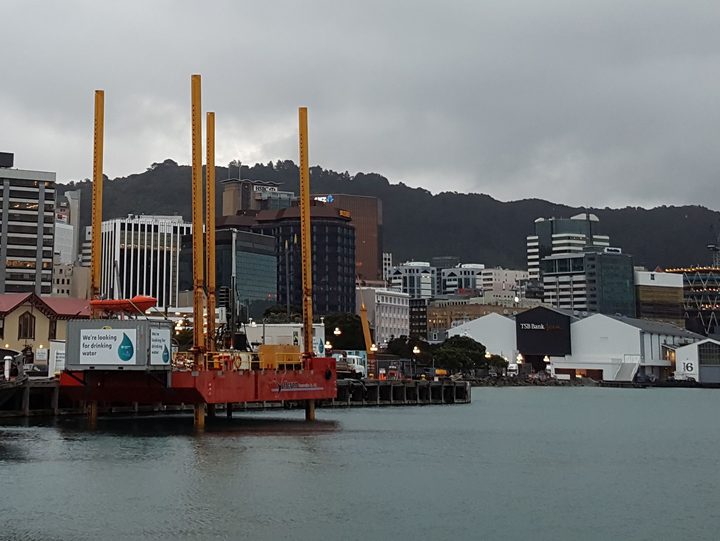 The rig which will be used to drill for freshwater under Wellington Harbour. Photo: RNZ / Alison Ballance

The Waiwhetu Aquifer already supplies much of the drinking water for the Wellington region. By size it is the fifth largest aquifer in New Zealand – it covers 75 square kilometres, compared to the Christchurch artesian system which is more than 3600 square kilometres.

The rocks maketh the aquifer

GNS geologist John Begg explains that it is geology which defines where groundwater can accumulate in an aquifer.

The Waiwhetu aquifer fills a wedge-shaped depression underneath the Hutt Valley. John says you can think of it as a bowl filled with alternating layers of gravel, shell-filled marine sands and silt.

The ‘bowl’ itself is made of greywacke, which is the common basement rock which forms the hills around Wellington. 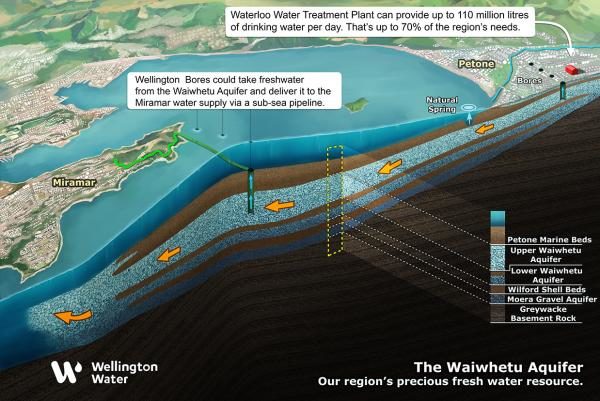 During the most recent glacial period, about 20,000 years ago, sea level was about 125 metres lower than it is today. The Wellington shore line was well out in Cook Strait. The Hutt Valley and what is now Wellington Harbour were swampy plains across which a wide braided river flowed.

This river has deposited large amounts of gravel which make up the present day Waiwhetu Aquifer. By 6500 years ago, sea levels had risen higher than they are today, and the sea deposited marine silts and sands on top of the gravels, while a swamp on the shoreline contributed more mud.

These muds and silts create an important layer or lid, known as an aquiclude, which caps and confines the aquifer.

As a result, the Waiwhetu Aquifer is what is known as an artesian system, which is under pressure – when a bore is drilled into the aquifer, this pressure pushes water up the bore hole by several metres.

This pattern of layering has repeated over time, and as you go down past the Waiwhetu Aquifer you find other older, deeper aquifers.

Although the aquifer is filled with many millions of litres of water, the body of water isn’t a river or a lake. Instead, the water fills the spaces between the gravels and cobbles.

Groundwater expert Mark Gyopari, from Earth in Mind, says that the Hutt River is an important source of water for the Waiwhetu Aquifer.

Water flows into the aquifer at a rate of 1000 litres per second through a short stretch of river floor in and just below the Taita Gorge.

Uwe Morgenstern is a groundwater expert from GNS Science and he has recently discovered that rain water is another significant source of water for the aquifer. He says this is important as rain water, which flows across the urban ground into the aquifer, is of a different quality to the very clean river water, and contains higher levels of the nutrient nitrate.

Once water becomes entrained in the aquifer it flows slowly.

Uwe uses the tritium method to age groundwater, and he says that by the time water reaches the Waterloo water pumping station, where up to 115 million litres of water a day are pumped out in summer, the water is 2-3 years old. It is about 10 years old at the Petone foreshore and 20 years old by the time it reaches Matiu-Somes Island in the middle of the harbour.

The Waiwhetu aquifer naturally discharges into Wellington Harbour through a network of springs on the harbour floor. Mark Gyopari explains that these springs place an important limitation on how much water can be taken out of the aquifer – if too much water is abstracted the risk is that salt water from the harbour might flow back into it. 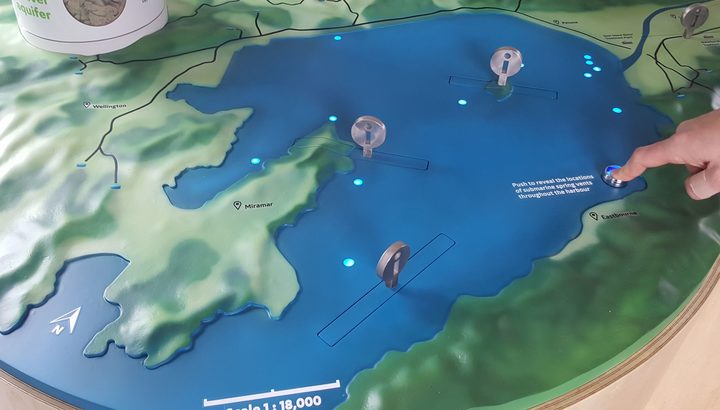 The blue lights on this model indicate freshwater springs flowing out of the Waiwhetu aquifer at various sites around Wellington Harbour. Photo: RNZ / Alison Ballance

Ulvi Salayev, a project manager with Wellington Water, says that geophysical surveys carried out by NIWA suggest that the Waiwhetu Aquifer may extend as far as the entrance to Wellington Harbour. He says that the purpose of the drilling taking place near the Miramar Peninsula is to find how much water might be available and whether it is of drinking quality.