Deep sea corals are being put to the test at NIWA to find out how they cope with sediment. 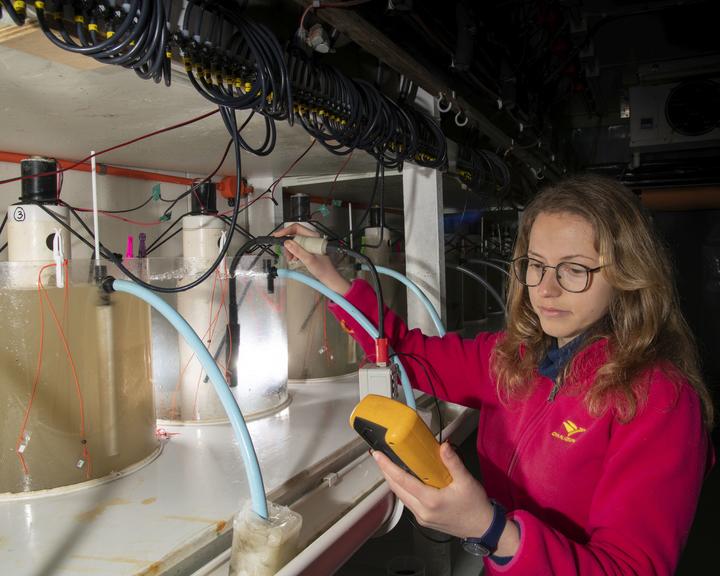 Think of corals and most of us imagine brightly coloured sunlit tropical reefs. But two thirds of the world’s corals live in the deep sea.

That is more than 3300 species of coral that live in complete darkness, in temperatures as cold as minus 1° Celsius.

They can survive at depths of up to six kilometres.

And deep-sea corals are record holders – meet the oldest animals on earth, which can live for more than 4000 years.

And yes, they form reefs, although not quite in the style in the Great Barrier Reef. And these reefs provide important habitat for other marine creatures.

Image of the seafloor at 1200 metres depth with the scleractinian stony coral Goniocorella dumosa and feathery crinoids attached. On the right a specimen image shows the complex 3-D matrix and distinct orange-pink cups with live polyps. Photo: CC-BY-4.0 NIWA

More than 110 deepwater species of coral have been described from the New Zealand region, and they feed on a rain of plankton drifting down from higher up in the water column.

Dr Malcolm Clark, from NIWA, says that on the Chatham Rise, which stretches out from Canterbury towards the Chatham Islands, you can find “quite spectacular reef-type structures” on the top of the rise, at depths of about 300 metres down to 1000 metres. Further down, at abyssal depths of up to three kilometres, you find sparser solitary corals

Living at the bottom of the sea does not mean that deep-sea corals are immune to human impacts. Fisheries trawling has been hugely damaging and in the past few years there have been proposals for deep sea mining and iron sand extraction that could also have an impact. 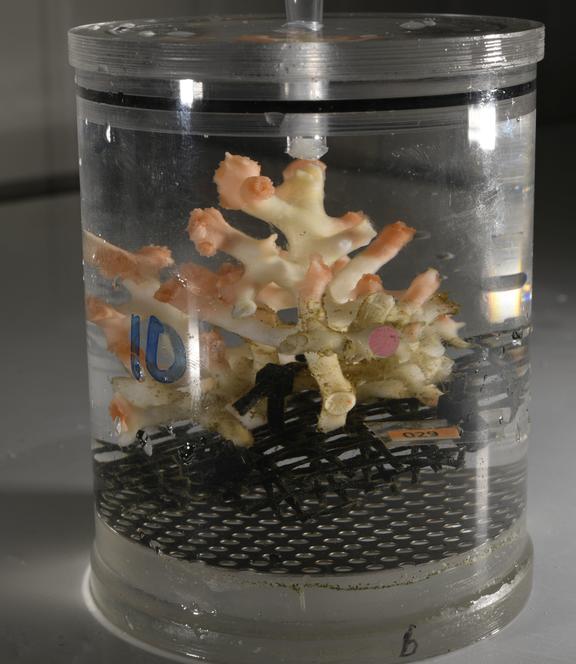 A deep-sea coral, Goniocorella dumosa, has its respiration measured in a special chamber during an experiment at NIWA. Photo: Peter Marriott / NIWA

A team of marine ecologists at NIWA have been trying to gauge how resilient deep-sea coral ecosystems might be to these kinds of disturbance, especially sediment plumes or clouds stirred up by various activities.

“We know pretty well what happens when we put a trawl down,” says Malcolm. “The footprint of the trawl damages the animals directly in its path, but it also stirs up this mud, and that spreads over a much wider area.”

“The important thing about sediment is that it is like dust in the wind – it spreads out.”

“We’re talking about quite a wide depth range where human activities or natural events could disturb the seabed and create these clouds of sediment,” says Malcolm.

“We think the animals may be less able to cope with disturbance because they’re more adapted to a uniform, fairly constant environment.” 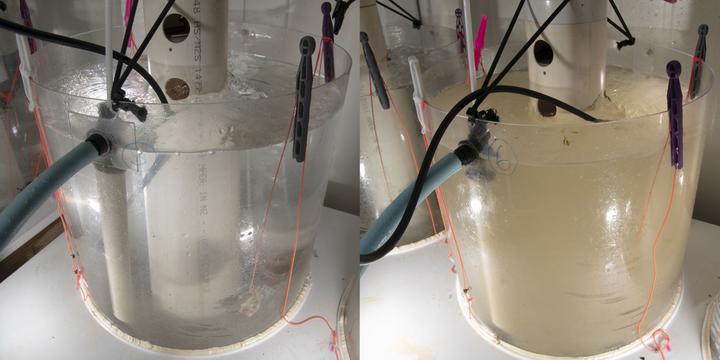 The deep sea stony coral Goniocorella dumosa, was subjected to four levels of sediment in an experiment run at NIWA. The tank on the left is the control with no sediment, and the right tank holds 50 mg/liltre, which equates to natural levels in some areas of the coral's habitat. There were also two higher concentrations. An Archimedes screw was used to keep the sediment in suspension in the tank. Photo: Peter Marriott / NIWA

The research project is called ROBES, which stands for the ‘Resilience of benthic communities to the effects of sedimentation.’ It is funded by MBIE, and is also part of the Sustainable Seas National Science Challenge.

A field experiment was carried out on the Chatham Rise which involved disturbing an area of the seabed with a specially designed tool to create a sediment plume. The suspended sediment created by the disturbance was tracked and monitored using a variety of survey techniques including conductivity temperature depth (CTD) samples, ship-mounted acoustic echo-sounders and NIWA’s ocean glider. 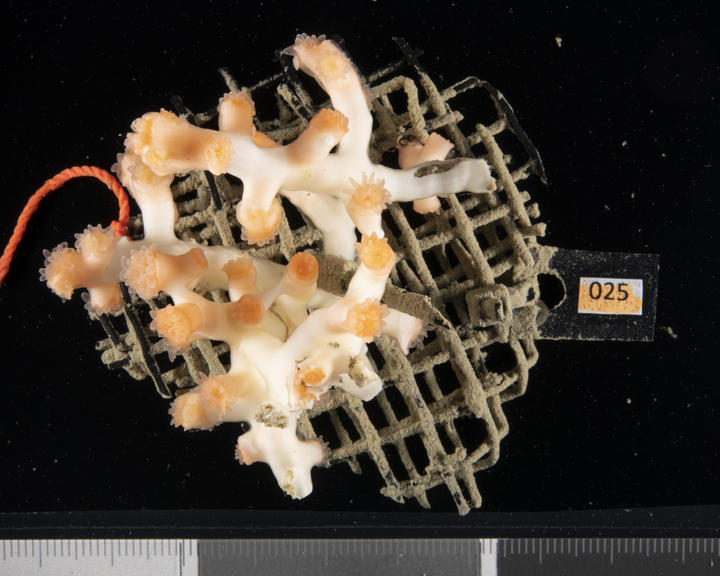 A deep-sea coral after two weeks of exposure to 50 mg of sediment per litre of seawater. The coral is showing some stress, as the usual pink covering on the coral's branches has retracted back to the polyps. Photo: Peter Marriott / NIWA

Samples of the major reef-forming coral on the Chatham Rise, Goniocorella dumosa, were collected and brought into the lab for further experiments.

The corals were kept in special tanks and exposed to various levels of sediment for three weeks, at low levels which mimicked natural conditions as well as much higher levels.

Deep-sea biologist Di Tracey says the experiment’s results have not yet been analysed, but initial observations suggest that corals exposed to higher levels of sediment were more stressed.

The research team has already carried out similar sediment experiments with dog-cockles and a species of sponge, which proved to be quite resilient.

Listen to the full podcast to hear more about the coral experiments, including genetic work which will investigate the microbiome of the coral to see if that changes when exposed to sediment.

You might also like a recent Our Changing World story, on how ancient corals from the tropics are the keepers of past climate records that can shed light on future climate changes.

The deep-sea corals have had babies

Here is some exciting news from NIWA: 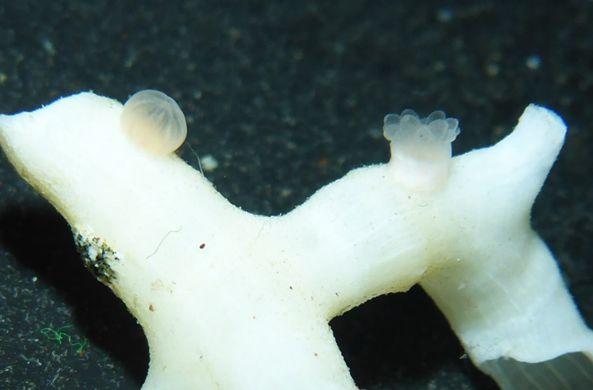 Small orange flecks spotted floating around a respiration chamber in a NIWA laboratory have led to a discovery about the spawning habits of the deep-sea stony coral Goniocorella dumosa.

The flecks were spotted on the last day of the sedimentation and turned out to be larvae that had been released from the mature coral polyps. This coral species is prevalent throughout the southern hemisphere, but its larvae have never been seen before. They measured about 1.1 mm by 0.8 mm and were covered in small hair-like filaments called cilia. 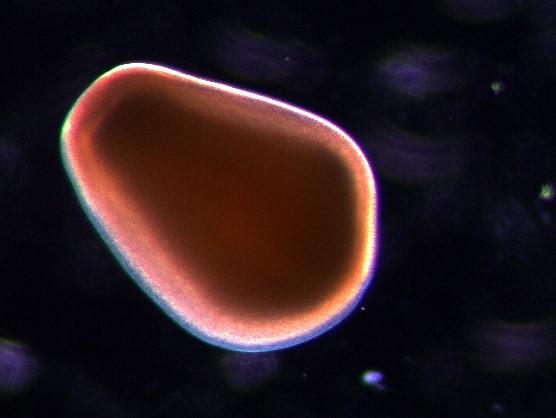 The larvae have now been under observation by NIWA scientist Dr Jenny Beaumont for several weeks who has photographed and monitored the larval development. Dr Beaumont says several have now “settled” by attaching themselves to mature coral colonies as well as to less expected substrates such as silicone tubing.

“The settling has taken place within a few days which is a contrast to other deep-sea corals, some of which can take months to reach this stage. It’s fascinating to watch and record their development as they form feeding tentacles and a calcified base,” Dr Beaumont says.

NIWA’s coral expert, Di Tracey, says being able to observe the larvae has changed the understanding of the reproductive process of this species. Previous work on the reproductive ecology of New Zealand corals had indicated that G. dumosa were broadcast spawners, releasing large numbers of gametes which become swimming larvae or planular once fertilized. These larvae disperse on ocean currents before settling from the water column and attaching to a suitable substratum.

However, the scientists say it is now clear that this particular species practises a method of spawning known as “brooding”. Brooders release larger but fewer larvae which are thought to stay closer to their parent host than the larvae of broadcast spawners.

“This serendipitous science has greatly increased our knowledge of the life history of this hard to study, and important, deep-sea species, “ Dr Beaumont says.

That these corals are now known to be brooders may mean they have a more limited dispersal potential than species which broadcast spawn. This could have implications for their recovery potential from human activities and therefore their management.