Time travelling with a climate scientist

Ancient corals are the keepers of past climate records that can shed light on future climate changes. 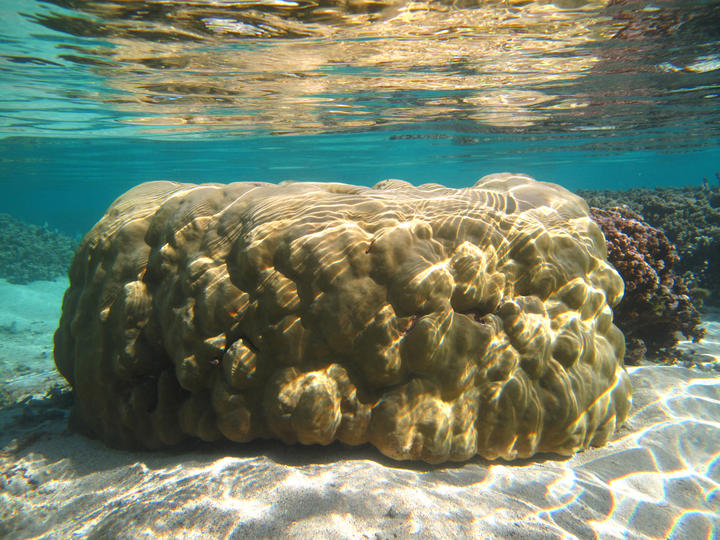 Porites lutea is a stony coral that can grow into large mounds which are several metres diameter. Photo: CC Philippe Bourjon / Wikip\media

A tropical coral reef is a vibrant patchwork of colourful corals, sponges, fish and a diverse range of other creatures.

Stony corals such as Porites grow slowly, over hundreds of years, to become mounds several metres across, often becoming mini atolls in their own right.

They are the coral reef equivalent of a canopy tree in a forest. Just like a tree’s trunk, the hard coral skeleton under the thin veneer of living polyps lays down annual growth rings that are a record of that year’s climate.

On average, says NIWA climate scientist Andrew Lorrey, a Porites coral grows about a centimetre a year, so a 75 centimetre-long core taken from a dead coral spans about 75 years.

About a thousand years ago, a storm or tsunami uprooted Porites from the lagoon of Aitutaki, in the southern Cook Islands, and cast them up on the shore, where they have remained like giant bleached cauliflowers. 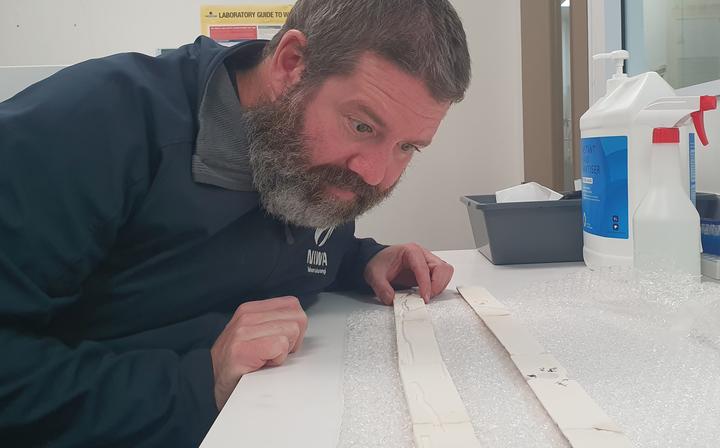 NIWA climate scientist Andrew Lorrey studies a core taken from an ancient Porites coral thrown up on the shore of Aitutaki in the Cook Islands. Photo: RNZ / Alison Ballance

For Andrew and colleagues, these ancient fossilised coral skeletons are a treasure trove that could shed light on past climate events in this little-known part of the Pacific.

“We’re using the chemistry of the corals to reconstruct past marine climates,” says Andrew.

Stable isotopes of oxygen show what the salinity of the seawater was at the time, while trace element geochemistry – specifically the calcium and strontium ratio – is related to temperature. He says the coral might even show what winds were like at the time.

Andrew says salinity in this part of the Pacific is related to rainfall, so the higher the rainfall the lower the salinity. He says heavy rainfall comes from a climate feature known as the South Pacific convergence zone, which changes in intensity and location.

He says there is very little paleoclimate data from that part of the Pacific, which is important climatically as it lies in the core region of the El Nino southern oscillation or ENSO, and is also the birth place of tropical cyclones.

Andrew says the Aitutaki specimens span an historically warm period known as the medieval climate anomaly, which lasted from about 950 to 1250.

“This might be a past analogue for what our future holds with ENSO [in a changing climate].”

The medieval climate anomaly coincided with a period when Polynesians were actively migrating across the eastern Pacific.

“The question,” says Andrew, “was what was the climate like at this time, how variable was it and how did people interact within the climate conditions that were occurring at that time.”

Andrew says research is still underway on the many coral samples that were brought back to New Zealand, but at first glance “those times didn’t look too different to what we’re experiencing today.”

He points out that other climate researchers are collecting similar records from other parts of the Pacific, which will all help create a larger picture of how the Pacific responded to previous warmer periods.

The research has been supported by a Marsden grant.

Andrew and his colleagues have also developed tree ring chronologies from ancient swamp kauri that go back more than 40,000 years. Listen to the podcast to hear about the kauri research, and hear more in this archive interview.

Andrew spoke with Our Changing World about his work digitising old weather records.