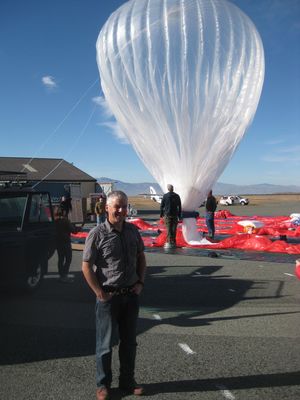 Climate scientist Greg Bodeker is using Google's Loon balloons to study what goes on in the stratosphere. Photo: Greg Bodeker

Google's Loon Project is an initiative to bring high-speed internet to some of the world’s most remote areas via hot-air balloons that act as floating wifi hotspots.

Since the project’s launch and test flights in New Zealand last year, Google has sent more than 170 of the giant balloons high up into the atmosphere from Lake Tekapo. The balloons rise between 15 and 20 kilometres above Earth’s surface, about twice the altitude of a passenger jet, and then get carried with wind currents.

It is this layer of the atmosphere – called the stratosphere – and its often ferocious winds that are of interest to climate scientists. “Changes that occur in the stratosphere can affect our weather and climate”, says Greg Bodeker, of Bodeker Scientific, who received a Marsden Fund grant to use the location data from thousands of the balloons to study the stratosphere.

High-altitude long-lasting balloons are a proven way to study the stratosphere, but campaigns are expensive and have been limited to a small number of events. Greg Bodeker says Google’s Loon project will allow him to study the distribution of various gases, including ozone and methane, in the stratosphere in unprecedented detail.

He says there are several processes that take place in the stratosphere that can affect weather patterns and long-term climate. In winter, a polar vortex of westerly winds forms in the stratosphere above Antarctica, and in late winter and spring, the ozone hole forms chemically in the air within this vortex. Later in the season, around the beginning of summer, the vortex breaks up, leading to ozone-depleted air travelling over New Zealand and increasing sunburn risk.

The processes that control the distribution of various gases within the Antarctic vortex, and how they are likely to respond to a changing climate, are not well simulated in atmosphere-ocean global climate models.

Greg Bodeker says his team will use the balloon’s position and temperature data to improve the understanding of dynamics in the stratosphere, which will in turn improve climate models.

Canterbury Farmers are buoyant about internet via Project Loon