Our Changing World for Thursday 12 December 2013

New Zealand storm petrels breed in burrows under kiekie and rocks on a steep, fragile valley side. The team hope the audio recorders (left) will capture the unknown calls of this little bird, a general view of the colony (middle) and orange tape at the back of the right-hand photo marks a known burrow (images: A. Ballance)

Ten years ago a group of bird watchers in the Hauraki Gulf saw a small mysterious bird fly across the bow of their boat. To everyone’s amazement and delight it turned out to be a bird that no one had seen for 108 years – the ‘extinct’ New Zealand storm petrel, known only from 3 museum specimens. It was an international sensation in the world’s birding circles, up there with the rediscovery of the takahe, taiko and kakapo.

Over the next decade nearly 300 sightings of New Zealand storm petrels were made, most of them in the Hauraki Gulf in the area between the Hen and Chicken Islands, the Mokohinau Islands and Hauturu-Little Barrier Island. But where were these enigmatic birds breeding?

It took many years, a team of dedicated volunteers and much hard work but earlier this year the breeding ground was located on Hauturu-Little Barrier Island. Surprisingly it wasn’t on a cliff or a remote gorge, but in a steep-sided valley just 40 minutes walk from the ranger’s house. Alison Ballance joins Chris Gaskin, who’s been leading efforts to find out about the New Zealand storm petrel, wildlife photographer Neil Fitzgerald from Landcare Research, and Hauturu ranger Richard Walle from the Department of Conservation at the breeding site to hear how they caught the small birds at sea, attached radio transmitters and tracked them to the valley. For a full version of the discovery, check out Chris Gaskin’s article in New Zealand Geographic.

Amber Bill and Tony Stoddard top up a sugar water feeder for birds in their garden (left) and Marc Slade and Jack Tredidga (right) check a rat trap in the Polhill Reserve (centre) (images: J. Tahana)

Zealandia sanctuary in central Wellington has been so successful that growing numbers of native birds – some of them quite rare – are spilling beyond its fence into surrounding suburbia. This spillover is called the Halo effect, and community groups and local residents are getting involved by transforming their backyards and clearing parks of predators so the birds can be safe.

Sally Brooker is a professor in the Department of Chemistry at the University of Otago, and she designs and makes molecules that might one day become molecular switches and memory in nano- computers of the future. She tells Alison Ballance how she became interested in chemistry back in school, and has built on her fascination of colour to work with transition metals such as iron that can occur in different spin states. Spin crossover materials can exist in two different states – low and high spin - depending on factors such as temperature or pressure, and these different states may be colour, for example, size or magnetism, which opens up the possibility of nano-switches and memory. Sally has recevied several Marsden Grants for her research. 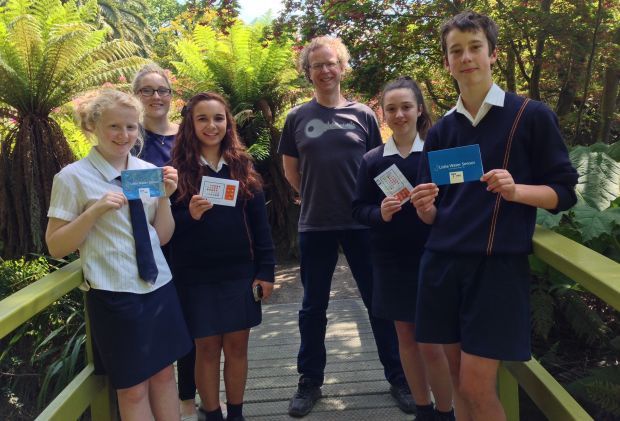 Over $30 billion will be spent on rebuilding Christchurch following the devastation wrought by successive earthquakes. Could sensors be incorporated into the new infrastructure, making it a truly “smart city”?

Roger Dennis believes so, and his first Sensing City project uses smart phones and small diagnostic kits to test water quality. The paper kits are dipped in the water for a second, and the indicator strips change colour. The change is photographed, and calibrated on the website, so that low, medium, and high readings can be given for indicators like pH, nitrates, and hardness. The smart phones can also transmit their location by GPS, so the readings are automatically uploaded to a map of Christchurch. If there is a problem with the application, digital photos can be emailed and manually uploaded.

The Little Water Sensors have been developed by the Little Devices team at the Massachusetts Institute of Technology (MIT) and are being “beta-tested” in Christchurch. At the moment they are being produced very cheaply, only a few dollars, and any issues that are found in the testing phase in Christchurch are being fed back and the tests revised. The idea being that the improved tests would cost about $5 and could be used in the developing world as real-time diagnostic tests of water quality.

The Little Water Sensor project is only one part of the larger concept of Sensing City which aims to install sensors underneath roads and on the top of street lights, as well as measuring other real-time information, for example people can opt-in to allow the use of information on their mobile phones, and then stream it back to a data collection source to give a snapshot of how the city is working.

The next project in the pipeline is to use sensors which clip onto the inhalers of patients who have chronic obstructive pulmonary disease (COPD), a respiratory illness. These sensors can measure things like air temperature, time medication was dispensed, and location. This information could be combined with readings from the top of street lights or from buses which measure air quality, so that it can be understood how air quality affects incidences of COPD in real time.

A web-only special where Roger Dennis explains why he believes Christchurch could become the world's first smart city. Related to the Little Water Sensor project.