Our Changing World for Thursday 28 February 2013 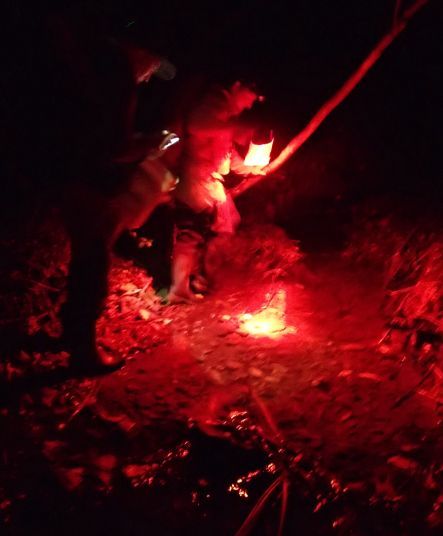 Dave West and David Moss using a red spotlight to look for fish and koura (crayfish) in a stream at Zealandia sanctuary (images: A. Ballance)

Two years ago, on 22 February 2011, Zealandia sanctuary in Wellington and the Department of Conservation joined forces to try and eradicate brown trout from the mainland island’s upper dam and streams. It was a bold experiment, as the poison rotenone had never been used in New Zealand in running water for a freshwater fish eradication.

But it’s been a resounding success, as Alison Ballance recently discovered. She joined DoC’s Dave West and David Moss for an evening of spotlighting, during an intensive week of monitoring to see if there were still any signs of trout. No trout were found but hundreds of native banded kokopu (below left) were seen, so Zealandia and the Department of Conservation have officially declared the eradication a success. 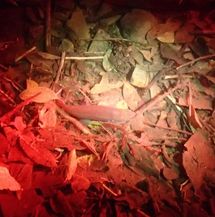 The lower dam at Zealandia contains introduced perch but it is not yet possible to eradicate these using rotenone – the upper dam and the two streams that run into it could be isolated from other waterways while the rotenone became inactive. Banded kokopu remained in the upper reaches of the streams which were not treated with rotenone, and have been able to reoccupy the streams in very good numbers.

You can listen to a story about electric fishing for perch in the lower dam here.

Fisheries acoustics involves using sound to ‘see’ deep into the ocean. NIWA scientist Richard O’Driscoll tells Alison Ballance how they use echo-sounders on ships at sea to send out pulses of sound at different frequencies, which bounce back off objects such as fish, as well as off the seafloor. The reflected sound can show how far away a school of fish is, how many fish are in the school, and what kind of fish they are.

Richard talks about some of the insights they have gained into fish behaviour and fish stocks this way, and how tethered cameras have recently given some extraordinary insights into the behaviour of orange roughy, which helps explain some of the things they have ‘seen’ using sound.

A mini stroke (or transient ischaemic attack (TIA)) is when blood flow to a part of the brain stops for a brief period of time, usually 1 or 2 hours, but up to 24 hours. Patients who’ve had a mini-stroke are at increased risk of recurrent mini strokes or ‘full strokes’. These patients are at greatest risk within the first three months of their initial TIA.

Coronary artery disease (CAD) is a pre-disposing reason to why an individual may experience a TIA, and why they may be susceptible to future events. CAD is a cluster of risk factors. You are at greater risk of incurring a cardiovascular or cerebrovascular event (i.e. stroke, TIA) if you have high blood pressure, high cholesterol (low HDL/ high LDL), high fasting blood glucose concentrations, a family history of CAD, smoker, obese or if you do not take part in regular physical activity. 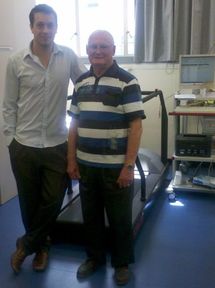 At the School of Sports and Exercise Science at Massey University, James Faulkner (pictured left) is trying to determine if regular physical activity and education soon after a TIA event helps to reduce the risk of coronary heart disease in people who’ve experienced a mini stroke. In particular, the study is trying to determine whether blood pressure and total cholesterol of an individual (along with other markers) can be lowered, thus potentially reducing the risk of recurrent events as the CAD risk profile is lower. A large cause for concern for stroke or TIA patients is high blood pressure (it increases the risk of brain bleeds) and high cholesterol (it increases the risk of ischaemia – blocked arteries/vessels). If these factors can be reduced, then statistically it is a good thing.

In the future James Faulkner would like to conduct a larger, multi-site trial (NZ and UK) where he could categorically state that physical activity reduces recurrent events. The small sample size of the current study means this can’t be said categorically at the moment but the results are encouraging, as they show the underlying benefit.

Ruth Beran meets with James Faulkner and watches as TIA patient Murray Northcott (pictured right) is put through his paces.