Our Changing World for Thursday 23 August 2012

Fab Lab is short for Fabrication Laboratory. They’re a world-wide phenomenon that arose from a project at MIT. In essence, they facilitate small scale manufacturing  at a community level by connecting a collection of fabrication tools – including 3D printers – with user friendly digital design technology.

Fab Labs can manufacture furniture, houses, models – the difference is scale, the people using it, the flexibility of design options and the personalization of the design process. Australasia’s first Fab Lab is opening this week at Massey University, headed by Chris Jackson. His guests for the opening - and for the Fab 8 Conference taking place in Wellington until August 28th - are Sherry Lassiter, programme manager for the Center for Bits and Atoms at MIT, and Kenny Chung, a PHD student at MIT.

To hear Kim Hill’s recent interview with the director of the Centre for Bits and Atoms, Neil Gershenfeld, click here.

Richard Newcomb, PhD student Bernd Steinwender and postdoctoral fellow Jérôme Albre are studying the genetics that underlie the production and sensing of pheromones by leafroller moths, seen in the insect breeding facility at right (images: A. Ballance)

The latest best guess for how many species there are on earth – not counting microbes – is 8.7 million species, plus or minus 1.3 million. And that’s just the species alive today - more than 98% of the species that we know about are now extinct! But what exactly is a species, and how do they evolve? A species is usually considered to be a group of organisms that can interbreed and produce fertile offspring. To do that, members of a particular species need to be able to recognise one another, and scent and smell is one way of doing this.

Richard Newcomb from Plant and Food Research, the University of Auckland and the Allan Wilson Centre for Molecular Ecology and Evolution is interested in the molecular basis of this chemical sensing. He and his group are working with native leafroller moths. The female moths produce pheromones to attract males, and research into the genes that control the production of pheromones in females, and the genes that are responsible for pheromone detection in the males is casting light on how species actually evolve. In particular it is helping address the conundrum of how mating systems diverge, when this requires both male and female parts of the mating system to co-evolve.

Richard Newcomb has appeared on Our Changing World previously, talking about odour receptor genes, machines that can smell, and gene discoveries in fruits and flowers.

Alcohol and the Cardiovascular System 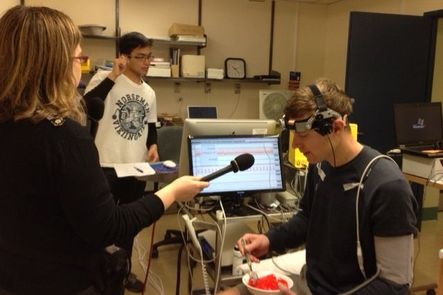 Ruth Beran interviews Shieak Tzeng who is conducting the study and healthy volunteer Braid MacRae who is eating the jelly shots.

Binge drinking is known to be a major cardiovascular risk factor with research indicating that excessive alcohol consumption increases the risk of stroke. Shieak Tzeng and Karen Peebles from the Cardiovascular Systems Laboratory at the University of Otago, Wellington are investigating how alcohol alters cardiovascular function and brain blood flow directly after a binge drinking session. In particular, they are trying to determine if the relationship between binge drinking and stroke is causal and what the likely mechanisms may be. Their working hypothesis is that the alcohol intake from a binge drinking session leads to an interruption in the compensation mechanisms. At the moment, they are testing healthy volunteers, like Braid MacRae, to determine what the normal changes are, and how binge drinking may be altering normal cardiovascular function. In the future though, they hope to test at risk groups with high blood pressure, low blood pressure, and general cardiovascular disease.

The sixth mystery sound from the opening theme is several different calls made by southern right whales, recorded around the Auckland Islands where the whales gather at this time of year to give birth and mate. It comes from a story about University of Otago research into whale acoustics and photo identification – find that story here.