Our Changing World for Thursday 16 August 2012

Previously on Our Changing World we’ve featured research from the University of Auckland’s Leigh Marine Laboratory which shows that the larvae of marine organisms are attracted to underwater sound. In the wild, the sound of waves on reefs, for instance, and the sound of snapping shrimps and urchins eating, seems to cue larvae into reefs, where they want to settle and grow.

Now researchers are taking that work one step further and seeing if ship noise plays a role in attracting larvae to settle on ship hulls. Alison Ballance heads to NIWA to meet Serena Wilkens who begins by explaining why marine fouling is a problem for ships, plays some recordings of ship generators recorded underwater while ships are in port, and talks about the results of experiments in which greenshell mussel larvae are played the recordings at various intensities to see how it affects the speed of settlement and development. 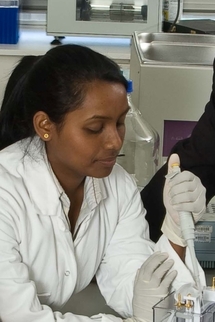 Endometriosis is the most common of all gynaecological disorders and a common cause of infertility, yet the condition is still poorly understood. Every one in ten women is affected by endometriosis, but researchers suspect that the incidence is much higher as many women and girls are never properly diagnosed. In endometriosis, the tissue that normally lines only the inside of the uterus is found growing in other parts of the pelvic region, causing inflammation and pain.

The winner of this year's Zonta Science Award is a reproductive biologist with a research focus on the molecular, cellular and pathological triggers of endometriosis. Anna Ponnampalam (left), a post-doctoral fellow at the Liggins Institute, hopes that her research will add enough understanding to form the basis for therapeutic intervention. However, the relevance of her research was only one reason why Anna was selected as the winner. Originally from Sri Lanka, Anna also blogs in Tamil about science and social issues.

If you have asthma or know someone that has it, you’ll know that currently there are ways of treating it – but there is no cure, and the side effects of treatment can be almost as bad as the disease. Franca Ronchese is a group leader at the Malaghan Institute and researches how immunology can cure diseases. And Graham Le Gros is a group leader and Director and his research centres around allergies, asthma and parasitic diseases. Amelia Nurse visits them to find out how they’re looking into isolating the asthma immune response.

Graham le Gros has featured on the programme before, talking about his research into hookworms - you can find a link to that interview here.

Fire-rated building materials, like walls, doors, and ceilings, can stop fire spreading, but need to be rated to the relevant building code. In New Zealand, building materials are tested at BRANZ which houses the only large-scale fire resistance furnace in the country. The furnace runs on diesel, air and fuel mixed together and the furnace reaches 600 to 800˚C within the first five to ten minutes. This can build to 1100 to 1200˚C over four hours. The furnace sticks to a time-temperature curve, with tests running from 30 minutes to 4 hours. Clients use the furnace to get certification in their country for their product. Fire engineers Greg Baker and Peter Whiting explain how the furnace works, as Ruth Beran watches as a couple of doors are tested.

The fifth mystery sound from the opening theme is Alastair Galbraith’s flame organ. You can listen to a podcast about this instrument here. You can also listen to his other instruments, the glass harmonium and aluminium rods, here.