Our Changing World for Thursday 19 July 2012

The late Sir Paul Callaghan wanted New Zealand to be ‘the most beautiful, stimulating, and exciting place in the world in which to live and work.’ As part of an effort to encourage young scientists to be part of this vision he approached the Rotary Club of Wellington to organise a competition that has been named in his honour – the Sir Paul Callaghan Awards for Young Science Orators.

In a 15-minute speech students have to demonstrate knowledge of an area of science, present it clearly to a non-science audience, and set out its practical application and relevance to New Zealand.

The inaugural Eureka! Symposium was held at Victoria University last week and Alison Ballance went along to meet some of the young finalists, including runners-up Toby Hendy and Scott Thomas, and winner Hadleigh Frost. Alison also talked with judges Russ Ballard, the Chancellor of Massey University, Paul Ridley-Smith, General Counsel for Contact Energy, and Andrew Coy, CEO of Magritek, the spin-off company founded by Sir Paul.

Secondary school finalist Yanni Cowie was interviewed by Kim Hill – you can find this interview here.

From left to right: Geoff Willmott, the qNano instrument (image: Izon Science), a static drop on a superhydrophobic surface, and Elf Eldridge

At IRL, Geoff Willmott and Elf Eldridge are working on what they call “plumbing” on the small scale, otherwise known as nano- and micro-fluidics. For example, they are interested in nanopore technology developed by Izon Science. This qNano instrument uses tunable pores to sense nanoparticles moving through a thin membrane filled with aqueous electrolyte, to which a voltage is applied. When a particle passes through the nanopore, it blocks the ionic current and a sharp dip in current is recorded. The qNano can detect and analyse particles less than one micron in size, such as exosomes, synthetic particles, viruses, and other large biomolecules.

Over the last two weeks we’ve been hearing about the kiwifruit disease Psa, caused by Pseudomonas syringae pv. actinidiae, a pathogenic bacterium. This week Alison Ballance is at the Mount Albert Research Centre to meet Plant and Food Research’s Matt Templeton, who works at the level of genes. He explains how Psa bacteria have effector genes that can overwhelm a kiwifruit plant’s natural defence system, and how the most common cultivars of kiwifruit, especially the Gold 16A variety, lack resistance genes to fight Psa infection. As part of the process of trying to breed Psa-resistant kiwifruit, the research team is trying to isolate Psa effector genes and understand how they work, and they are also trying to understand which kiwifruit resistance genes are most effective against Psa so that new cultivars can be bred that contain those genes. 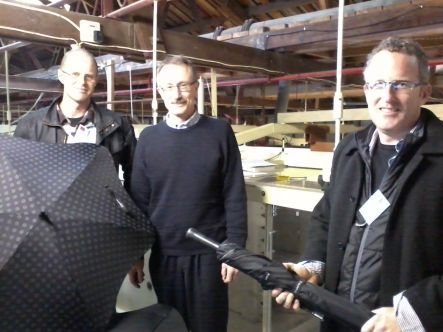 Greig Brebner and Scott Kington (left and right) from Blunt umbrellas, showing some of the umbrellas that engineer Neil Jamieson (centre) tested in the OPUS wind tunnel (image: A. Ballance)

OPUS International’s Central Laboratory at Gracefield houses the longest wind tunnel in the Southern Hemisphere. The 70-metre long tunnel is mostly used to test new building designs, but engineer Neil Jamieson is happy to test anything – including umbrellas. Alison Ballance joins Greig Brebner and Scott Kington from Blunt Umbrellas as they try out some of their umbrellas at the wind tunnel’s maximum speed of 120 kilometres per hour, and they explain how they’ve been designing and engineering an umbrella that can withstand strong winds and be comfortable to use.

The first sound in our opening theme is a Jiffy drill being started. Jiffy drills are used in Antarctica for creating ice cores, and this sound was part of a story about the algae and microscopic life that lives in and on the underside of sea ice. You can listen to that story here.