Our Changing World for Thursday 12 July 2012

Secrets of the Ice 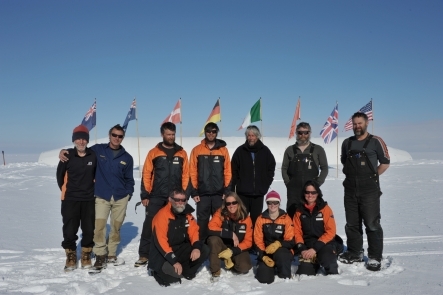 The RICE team, representing eight nations, at the field site on Roosevelt Island (all images courtesy of Nancy Bertler).

Glaciologist Nancy Bertler has spent her last two summers on ice, camped in a tent hundreds of kilometres away from Scott Base, in search of clues about the past behaviour of the Ross Ice Shelf and West Antarctica. Her team set up a drill rig and camp site on a small ice-covered landmass called Roosevelt Island to recover ice cores that contain information about the climate conditions during the last 20,000 years and beyond.

The Roosevelt Island Climate Evolution (RICE) project is an international collaboration between New Zealand, USA, Denmark, UK, Germany, Australia, Italy and China. Its aim is to recover a 750-metre core to determine how quickly the West Antarctic Ice Sheet, the smaller of Antarctica's two icesheets, could change in a warming world. The ANDRILL project, which has analysed sediment cores from two sites at the Ross Ice Shelf, has already shown that about five to three million years ago, the last time when atmospheric concentrations of carbon dioxide and temperatures were similar to those predicted for the end of the 21st century, the Ross Ice Shelf disintegrated several times. The Ross Ice Shelf is a major drainage pathway for the West Antarctic Ice Sheet and any melting of this giant floating slab of ice can initiate the collapse of West Antarctica. 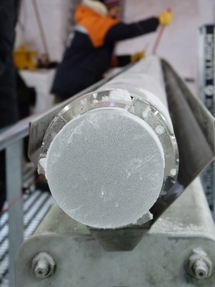 The advantage of using ice cores (left) is that they provide a much better resolution and can show changes on an annual basis, much like tree rings record growth every year. They also include small bubbles of ancient air, which record the concentration of greenhouse gases at the time.

To determine the rate of change, the RICE project hopes to uncover an annually resolved record for the past 20,000 years and beyond, when global temperatures increased by six degrees Celsius to preindustrial temperatures, global sea level rose by about 120 metres, and the Ross Ice Shelf grounding line retreated over 1000 kilometres.

Between summer field seasons in Antarctica, the RICE cores are being processed at the New Zealand National Ice Core Research Facility at GNS Science. 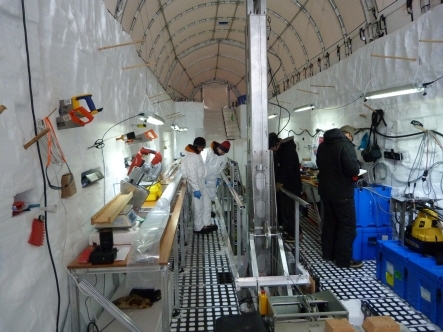 Under the drill rig, the team had to dig out a temporary and naturally temperature-controlled laboratory in the ice where the cores are processed and stored.

Last week on Our Changing World we heard how Pseudomonas syringae pv. actinidiae (Psa), a pathogenic bacterium that infects kiwifruit, or Actinidia, species, was affecting kiwifruit orchards in New Zealand, and we visited the Plant and Food Research orchard in Te Puke, where Luis Gea talked about the challenges of breeding a Psa-resistant kiwifruit.

This breeding work is being complemented by other research programmes currently underway at Plant and Food Research, and this week Alison Ballance heads to Ruakura near Hamilton to meet Tony Reglinski. Tony is involved in laboratory and glasshouse trials, exposing small seedlings of new kiwifruit cultivars to known quantities of Psa to measure their susceptibility to the disease. The team is also injecting known amounts of Psa into sections of woody stems sent from various orchards, and then measuring the size of the Psa infection over the following weeks. Tony explains that there is no single perfect assay to test the susceptibility of kiwifruit to the disease, so that it’s a matter of using a number of techniques and ensuring replication. 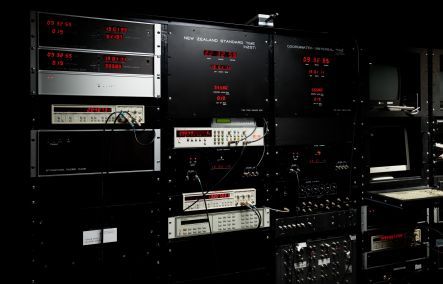 At midday on 1 July in New Zealand a leap second was inserted into the atomic time scale, with Radio New Zealand listeners hearing an extra time ‘pip’ before the midday news bulletin. The Measurement Standards Laboratory at IRL coordinated the insertion with the caesium atomic clocks housed there unusually displaying ’11.59.59’, ’11.59.60’ and ’12.00.00’.

Leap seconds were created in 1972 as part of the shift to atomic time, and were introduced to ensure that the atomic time scale never differed from the rotation of the earth by 1 second. However the earth is gradually slowing and the duration of a day is getting longer. The addition of leap seconds is decided by the International Rotation Service located at the Paris Observatory based on data from observatories around the world. They are added at irregular intervals, which causes some concern for people wanting to maintain continuous time scales.

Tim Armstrong, director of the Measurement Standards Laboratory at IRL, explains to Ruth Beran what a leap second is and shows her how the caesium atomic clocks work.

Hilary Nath (left) and Alan Langdon next to the prototype PEFT filter, which passes water between two closely-spaced and perforated electrodes (right) (images: A. Ballance)

For his post-doctoral research chemist Hilary Nath has worked with supervisor Alan Langdon to develop a new perforated electric flow-through (PEFT) electrochemical water treatment system. Having developed a prototype filter that applies a low voltage current to water passing between two closely spaced and perforated electrodes, a larger pilot scale filter is about to be trialled on a Waikato farm. Originally designed to cope with iron and manganese-rich bore water that is expensive and difficult to treat, the filter turns out to be very effective at disinfecting water through its production of chlorine ions, and the researchers now think it has a wide range of possibilities as a cheap simple way of providing clean safe drinking water in developing countries. WaikatoLink is already patenting and commercialising the novel technology. Alison Ballance joins Hilary and Alan to see the prototype and hear how it works.