Our Changing World for Thursday 28 June 2012

On Wednesday 5 October 2011 the 37000 tonne cargo ship CV Rena ran aground on Otaiti - Astrolabe Reef - in the Bay of Plenty. There were 1368 containers and 1733 tonnes of oil on board. Maritime New Zealand declared a tier 3 response, and mobilised the National Oil Spill Response Team. Following a storm a few days after the grounding, the first of about 360 tonnes of heavy fuel oil began to come ashore, much of it at Mount Maunganui (pictured above).

In this special Our Changing World programme Alison Ballance visited the Bay of Plenty eight months After the Oil, to meet scientists and volunteers involved in the clean-up and monitoring.

Remnants of oil on a rock at Leisure Island, and David Schiel (left) and Chris Battershill (images: A. Ballance)

David Schiel is head of the University of Canterbury’s Marine Ecology Research Group. He and his team, including Paul South, are part of Te Māuri Moana, a collaborative research project led by Chris Battershill. Chris holds Waikato University’s Bay of Plenty Regional Council Chair in Coastal Science, based in Tauranga, and he has experience in ecotoxicology and an involvement in oil spills in Australia.

The announcement of funding for Te Māuri Moana, as part of the multi million dollar Rena Recovery long term environmental monitoring programme, came in early June. Surveys of rocky and sandy shores are already underway, but researchers won’t be able to investigate direct impacts on Astrolabe Reef itself and the surrounding seafloor until the salvage operation is complete – and as yet there is no date for that. But one person who knows what it was like before the Rena ran aground is marine biologist and underwater photographer Kim Westerskov.

When oil from the Rena began to come ashore near Tauranga last October, it was already known that using people power to remove the oil from beaches was a preferable option to using chemicals or heavy machinery.  Pim de Monchy from the Bay of Plenty Regional Council co-ordinated a database of 8000 volunteers to help in beach clean-up operations, and Alison meets him and some keen Mt Maunganui residents who have carried on their clean-up work and become involved in the Regional Council’s Coast Care programme. The volunteers are Leigh Pettigrew, Naran, Vincent Bethell and Gary Meltzer.

Another strand of the Rena Recovery programme involves wildlife. The Oiled Wildlife response team, led by Massey University’s Brett Gartrell had 409 birds in their care during the worst of the oil spill, and most of these were successfully released. But almost 2500 dead birds were collected, and it’s clear that many thousands more seabirds and other marine wildlife died or were affected by the oil. Chris Clark from the Department of Conservation is involved in the wildlife recovery efforts, which aims to support local groups already involved in predator control to help key species such as little blue penguins, grey-faced petrels and New Zealand dotterels. 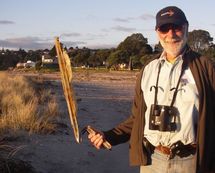 One such community group is the Maketu Ongatoro Wetland Society. This award-winning dune and wetland restoration project looks after a breeding population of the rare New Zealand dotterel, and during the height of the oil spill response the Maketu birds were among 60 dotterels taken into captivity to avoid any issues with oiling. Society members were also part of a motivated Maketu community response to the oil spill, which included the use of oil booms to protect the estuary, as local resident Julian Fitter (pictured above with a piece of container debris from the Rena) explains on a walk along the Maketu Ongatoro spit.

The initial results of the Rena Recovery environmental monitoring programme are due to be presented in early 2013.

Fran Dibble, here pictured in front of her work Hover, which was part of the 2008 Notes on Nature exhibition at Te Manawa in Palmerston North. (all images courtesy of Zimmerman contemporary art gallery)

Art and science may seem disparate disciplines, but they mix well in a new initiative called S+ART which was launched in Palmerston North recently to promote the convergence of science, technology and art. Perhaps the most famous embodiment of this interdisciplinary approach is Renaissance painter Leonardo da Vinci, who was also a gifted scientist and mathematician, engineer, anatomist and inventor. 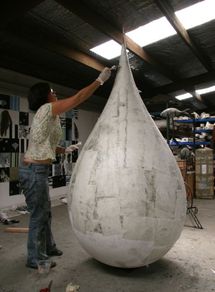 Fran Dibble (left) is an artist whose work bridges disciplines and her background in biochemistry and botany has continued to inspire her art. Her installation With the power to move mointains and carve valleys is the first show under the umbrella of S+ART. It can currently be viewed at the Zimmerman gallery, and will then be on display at Te Manawa from 2 July until 5 August.

Fran draws on concepts from both science and art as she explores the way great landscapes are carved out by something as simple and commonplace as water.  Yet she describes her monumental raindrop as fiction, an idealised shape that bears no resemblance to the actual form water takes as it falls. "The droplet is like a logo or hieroglyphic, a symbol of water rather than a realistic interpretation." 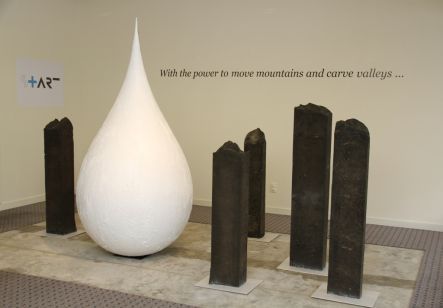 In the installation (pictured above), the raindrop is set against small sand pillars whose tops have been carved to represent mountain ranges in an artwork that combines both scientific knowledge and artistic creativity.

The wider vision for S+ART is that Palmerston North becomes an incubator of collaboration between scientists, artists and technologists in an exploratory environment.