Tagged shark Marbletail lunges at a tuna bait being dragged through the water to attract him close enough to the boat to be tagged, and Clinton Duffy and Malcolm Francis attach an acoustic receiver to a mooring buoy (images: M. Francis and A. Ballance)

For the last six years a joint NIWA-Department of Conservation research team has been tagging and photographing great white sharks in Foveaux Strait, in an effort to learn how many of these enigmatic predators live there and how they spend their year. Satellite tagging has shown that each winter the sharks migrate to the tropics, returning in summer to ‘hang out’ near seal colonies around Stewart Island. Acoustic tags are now revealing more about how sharks move around the local area, and Alison Ballance joins shark experts Malcolm Francis from NIWA and Clinton Duffy from DoC on their annual tagging trip as they lure great white sharks alongside the boat and attempt to attach acoustic and satellite tags. They take photographs to individually identify sharks from their colours and patterns, and they soon meet new sharks such as the strikingly-marked Scar Face, along with old familiars such as Horse and Marbletail. During the course of this year’s two-week long expedition the team attached 20 acoustic tags and 5 pop-off archival (PAT) satellite tags. They report they are still carrying out the photo identification work, but that they saw many known sharks and about the same number of new sharks, that the greatest number of sharks they saw on one day was 13, and that two large females – Miranda and Ella – who have been a feature of previous tagging trips were conspicuously absent, leading to speculation that perhaps they have matured and are away breeding (very little is known about great white shark breeding). Malcolm Francis and Clinton Duffy have previously featured on Our Changing World talking about their shark research. Click here to listen to Malcolm talking about sharks in general, click this link for an interview about shark finning, click here for a story surveying rig nursery grounds in estuaries, and click here to listen to Clinton and Malcolm talk about the long-distance migrations that New Zealand sharks make to the tropics.

Clinton Duffy uses an underwater camera on a pole to photo identify a great white shark (this one has a tag floating by its dorsal fin), and the oily tuna berley poured into the water to attract sharks to the boat (images: A. Ballance)

The ‘Sea-level Rise – Meeting the Challenge’ conference was held in Wellington this week, and it brought together scientists, and urban planners from around the country. The aim of the conference was to encourage urban centres to plan for some of the expected consequences of climate change and a warming world, including rising sea-levels, increased frequency and intensity of rainfall events and storm surge events. Alison Ballance first caught up with NIWA’s Doug Ramsay to hear about some of the climate change predictions that will affect the New Zealand coastline. Then she spoke with NIWA’s Andrew Tait who led a multi-disciplinary team, that included engineers and scientists from MWH, BRANZ and GNS Science, to develop a climate change urban impacts toolbox for city planners and others to use in planning for the future. For more information on rising sea-levels, follow this link to the Royal Society of New Zealand's Emerging Issues Paper on sea level rise (2010). 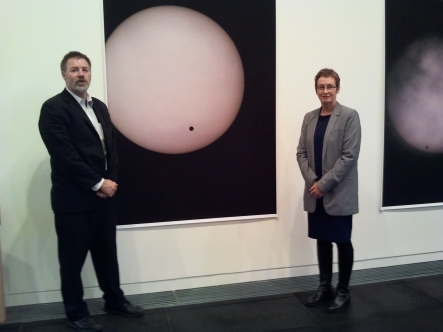 With less than a month to go to the Transit of Venus on June 6, Dark Sky invites visitors to experience images and soundscapes from the hot planet and other parts of the night sky. The exhibition explores how photography has been used to capture the skies and to shape our ideas about space. Bridging science, art and commerce, the show brings together images and artworks ranging from pocket-sized postcards to digital prints sent from space and large-scale contemporary installations, made by artists, astronomers, photographers and unmanned spacecraft. Inspired by photographs taken by Hermann Krone, a professional photographer on the German expedition to the Auckland Islands who documented the Transit of Venus in 1874, Dark Sky also features contemporary German artist Wolfgang Tillmans and his series of the 2004 transit, as well as images by David Stephenson (Australia), Trevor Paglen (USA) and Eric Lee-Johnson (New Zealand), among others. Two New Zealand artists have been commissioned to create new works for the exhibition. Stella Brennan is using research she has undertaken into the Soviet Union’s Venera space programme of the 1980s to develop a sound installation and Simon Ingram has built an inflatable antenna that translates electromagnetic waves into instructions that drive a machine to produce a new ‘radio painting’. The accompanying programme of public lectures brings together scientists, artists, historians and writers. At noon on Wednesday, 16 May, theologian Chris Marshall and biologist Michael Hannah use Colin McCahon’s Venus and Re-entry: The Bleeding Heart of Jesus is Seen above Ahipara as a starting point for a discussion about why we consider heaven to be above us. 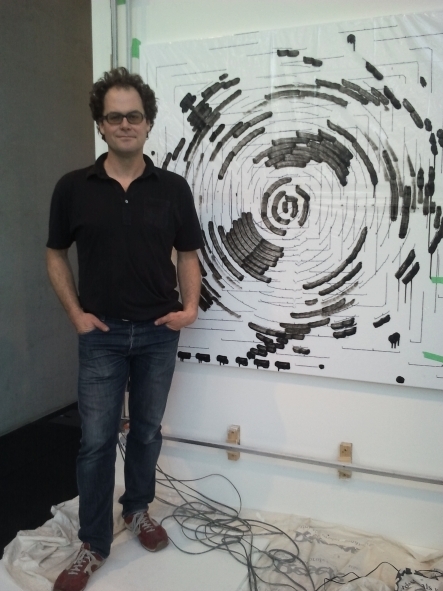 Simon Ingram designed an inflatable parabolic dish which receives the frequencies produced by atomic hydrogen, the most common element in the universe, to drive a painting robot.

You can also hear an interview with Simon Ingram on Radio New Zealand Concert's Upbeat.

A Transit of Venus happens when the sun, Venus and Earth are in perfect alignment. From Earth, you can observe a small black disc slowly wandering across the sun over the course of several hours. This happens in a pattern that repeats every 243 years: there's a gap of 122 years, then a pair of transits spaced eight years apart, then a gap of 105 years, then another pair. On 8 June 2004, the first of the current pair of transits happened but it occurred during night time in New Zealand and could therefore not be seen. The second transit, on June 6, will be visible during the day.Tolaga Bay has been chosen as New Zealand’s centre of observations because it is the site of some of the earliest positive encounters between Māori and Pākehā, and the first collection of indigenous flora and fauna. Captain James Cook anchored the HMS Endeavour at Cook’s Cove to replenish water, firewood and fresh supplies during his voyage to observe the 1769 transit. Our Changing World will join the observations and celebrations taking place in Tolaga Bay and Gisborne and broadcast a special show from the East Cape.